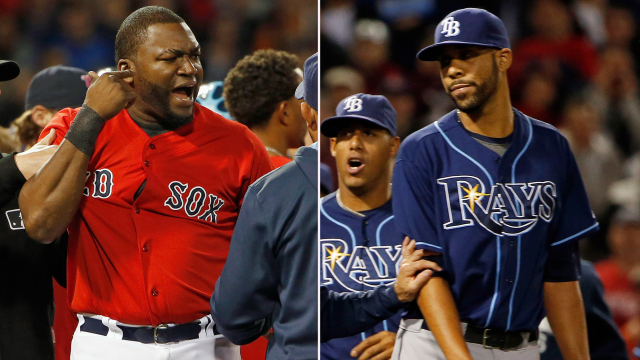 David Price signed a seven-year, $217 million deal — the highest contract ever given to a pitcher — on Tuesday to be the Boston Red Sox ace. That means Price will now be teammates with longtime Red Sox slugger David Ortiz, and that’s notable because the two stars have not exactly been chummy in the past.

The assumption is that the beef began in game two of the 2013 ALDS at Fenway Park, when Ortiz hit a pair of home runs off Price (then a member of the Tampa Bay Rays). On the second home run, Ortiz either admired the home run or waited to see if it would land fair or foul. Whatever the case, Price didn’t appreciate it:

Fast-forward to a May 30, 2014 regular-season game at Fenway Park, where Price seemingly shows his displeasure over Ortiz’s actions in the ALDS game, by hitting Ortiz with a fastball:

Ortiz did not take too kindly to the beaning:

“First at-bat of the season against me he drilled me? I mean, it’s a war. It’s on,” Ortiz said after the game, via The Boston Globe . “Next time he hits me he better bring the gloves.”

Ortiz continued on a profanity-filled monologue, during which he called Price a “little bitch.”

Price was then of course asked about Ortiz’s comments, and had this to say:

“He was mad, I get it … You say stupid stuff when you’re mad. Been there. I’m sure he probably wishes he didn’t say some of the things he said. You can’t relate the game we play to a war.

“[NFL player] Kellen Winslow got a lot of crap for saying he was a soldier. No, you’re not a soldier. This is not war. We have troops fighting for us that are in a war. It’s not a good comparison.”

So there’s the backstory on the history of bad blood between Price and Ortiz, and will it be difficult for them to now be teammates? Ortiz told a Dominican Republic radio station on Wednesday that it won’t be an issue:

“No problems. All that’s in the past. Now he is my partner,” Ortiz told 102.5 FM in Santo Domingo, Dominican Republic, via ESPNdeportes. “When a person joins your cause, you must leave the past in the past.”

“We need pitching and David Price is a great pitcher and has showed that for years. I hope he will help us,” Ortiz told 102.5 FM in Santo Domingo. “It’s a marquee pitcher, and that’s what we need.”

After the Red Sox finished in last place of the AL East in 2015, it’s no surprise the 40-year-old Ortiz is all about setting aside the differences he’s had with one of the game’s top-10 pitchers in Price.