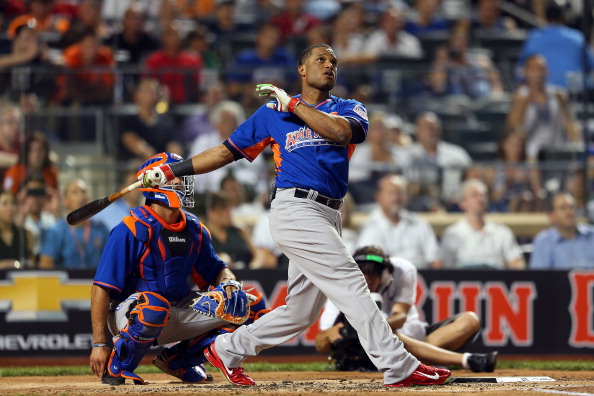 Then the MLB Players Association came and ruined the fun, banning that starry trio from participating in the contest. Here’s party-pooping MLBPA executive director Tony Clark’s explanation, via ESPN:

“Unfortunately, the people in charge of the event didn’t follow the necessary protocol to ensure that any major leaguers participating in an event like that one is protected from a possible injury,” said Tony Clark, MLBPA’s executive director. “As a result, in order to protect the rights and interests of the players invited to compete, we were forced to advise those players and their representatives that participating in the event was not in their best interests.”

According to the organizing committee, the MLBPA said it would need a financial guarantee to allow Ortiz, Cano and Cabrera to participate, and the request for their participation had to be made no later than Jan. 1.

The home run derby remains scheduled for Wednesday in Santo Domingo, with an altered cast of hitters. The biggest names remaining in the event are Twins DH Kennys Vargas, who is allowed to participate for who knows what reason, and retired outfielder Vladimir Guerrero.

There are a few weird things going on here. For one, it would be fascinating to hear what safety procedures Clark is talking about. Stars are obviously allowed and encouraged to participate in the MLB Home Run Derby in July, so why not this one? What type of safety could we be talking about?

And then there’s the weird double-standard that allows Vargas and his $517,500 salary to participate but not Cano (who will make $24 million in 2016), Ortiz ($15.8 million), or Cabrera ($28 million). Sure it makes sense to figure that the three stars have more to lose by getting hurt in this event, but shouldn’t the union do all it can to protect Vargas as well?

Alas, the first annual Caribbean Series home run derby will have to settle for washed-up Vlad, 25-year-old Vargas, who has been compared to Ortiz but has underwhelmed at the major league level, and a bunch of guys you’ve never heard of.