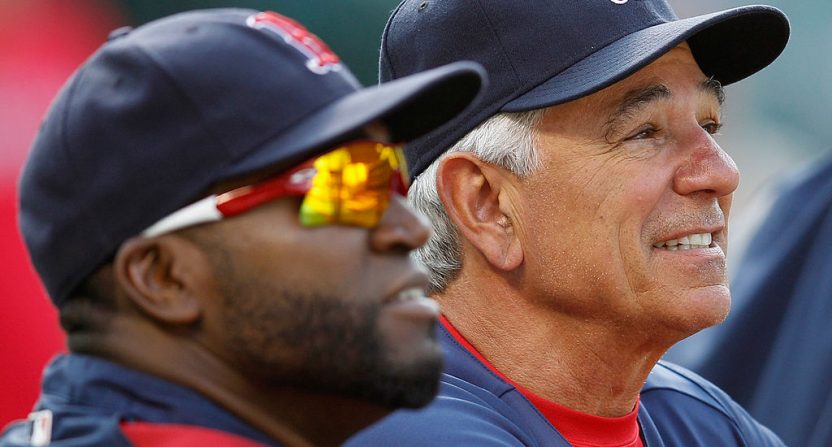 The one year Bobby Valentine was manager of the Boston Red Sox in 2012, the team finished 69-93 and missed the playoffs by a mile in between a pair of 90-win seasons. The 2012 season was a mess for Boston, and star slugger David Ortiz opened up in his new memoir Papi: My Story that the year seemed doomed from the start because of Valentine.

Here is the excerpt published by Sports Illustrated this week:

The drama began almost immediately in spring training. I remember fighting the thought, very early, We’re going to have an absolutely terrible year.

It was all about [Valentine] in the spring. It was as if he wanted to prove how smart he was by running us through all these drills he’d used while managing in Japan, drills we had never done before. Bobby was in his own bubble, and I just wanted to get him out of it and tell him, “F— you.”

One day we were doing his drills and the shit hit the fan. We were hitting pop-ups, and Bobby had said that he didn’t want infielders to say, “I’ve got it, I’ve got it. . . .” He thought that was an unreliable way of calling off a teammate because, in a noisy stadium, the player who’s being called off might not hear his teammate taking control. Well, all players have habits. And in American baseball, most infielders taking the play say, “I got it.”

So when our shortstop, Mike Aviles, got under a ball, he instinctively said, “I got it.” Bobby snapped. It was unlike anything I had ever seen in the majors. He went off on Aviles, cussing and verbally tearing him down in front of everyone. If it had been me, I would have gone up to him, right in front of the fans and dropped a punch.

Ortiz also said that when Valentine was hired during the 2011 offseason, some friends suggested he should just retire at 36 years old rather than play for the new manager. As we of course now know, Ortiz kept playing in Boston, but he clearly didn’t have a good time that year. In the excerpt, he also wrote Valentine never cared for what he or other veterans like second baseman Dustin Pedroia and first baseman Adrian Gonzalez had to say.

Just three games into the season, a bunch of Red Sox players basically wanted to mutiny against Valentine, but Ortiz thought it was too early in the season for such a drastic measure.

Bobby’s seat was in the middle of the plane, and the players were in the back. That day I was near the front of our section. I remember looking up and seeing a line of my teammates walking toward me. They were pissed. They said, “We want that mother—— fired before the airplane lands.”

I didn’t know what they might have done if they had gotten to him, but I felt it was way too early in the season for that kind of takeover. He was aggravating as hell, arrogant and disrespectful, but I felt that we needed to try our best to support him.

Valentine responded on the Tiki and Tierney Show on Thursday and unsurprisingly downplayed Ortiz’s criticism:

“Well, I wish he told me three weeks into the season instead of hugging me all the time when he saw me! Yeah, that was a weird situation. I don’t know how it could have been about me in spring training, but I’ve heard a lot of those general comments. But whatever. I hope he sells a lot of books. I hope I help him sell some.”