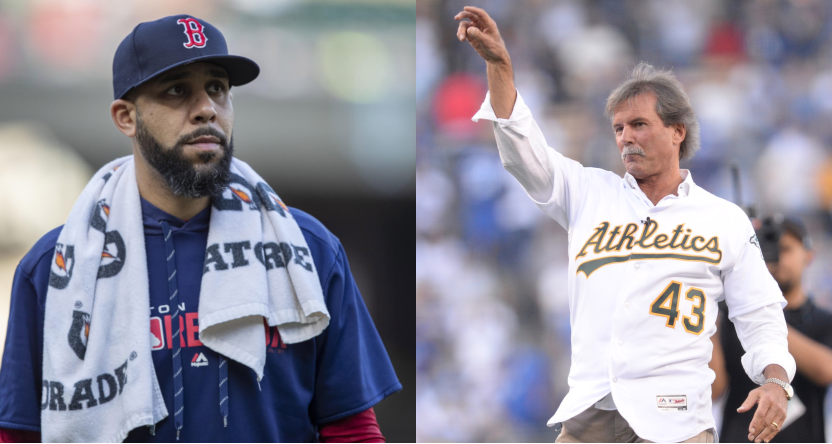 It seems David Price still is upset with Dennis Eckersley. In June 2017, Red Sox pitcher Price publicly confronted NESN analyst Eckersley on the team plane after Eckersley said “Yuck” on-air about Red Sox pitcher Eduardo Rodriguez’s stats, with Price reportedly yelling “Here he is — the greatest pitcher who ever lived! This game is easy for him!” and “Get the [expletive] out of here!” Price then denied wrongdoing beyond “I could have handled it probably a different way” and threw out some troubling “This is one band, one sound. We’ve got to have everybody on board” lines suggesting that team analysts should only be positive, while Eckersley said that August he’d “moved on.”

Now, Price is ticked again because of comments Eckersley made about that incident in a piece by Chad Finn of The Boston Globe that was published Tuesday. Here’s how Finn presented that as part of a larger piece on Eckersley titled “‘I got lucky, man.’ Dennis Eckersley on surviving his tough times: The outspoken Red Sox broadcaster and Hall of Famer talks about getting through his worst moments and why baseball has never lost its joy”:

It was an ambush, tactless and calculated, and it still bothers Eckersley. “I didn’t know how to deal with that. I don’t plan on saying a word to him, I don’t plan on seeing him, never. [Broadcasters now board the plane before players.] I don’t really give a [expletive] one way or another. I don’t think he really cares one way or the other.”

When asked about the incident the day after it happened, Price said, “Some people just don’t understand how hard this game is.” It has to be in the running as the most ignorant sentence ever uttered about Dennis Eckersley.

Yes, that doesn’t portray Price well, but most of the wording there is Finn’s, not Eckersley, and Eckersley only says (presumably in response to a question by Finn, which would be a completely reasonable thing to ask about in a profile on Eckersley’s broadcasting career) he doesn’t plan on talking further with Price. And yet, when asked about that Wednesday, Price absolutely unloaded on Eckersley, accusing him of continuing to bring this up (it doesn’t appear that he did) and complaining about Eckersley not meeting with him afterwards in 2017. Here’s more on that from Nicole Yang of the Globe:

“That was two years ago,” Price told reporters in the clubhouse Wednesday afternoon. “Two years. Close to 800 days. Come on, dude.”

Price has since said on multiple occasions that he wishes he handled the situation differently — something he once again reiterated Wednesday afternoon. According to Price, the pair had a meeting scheduled to address the matter in 2017, but Eckersley never showed.

“He backed out,” Price said. “I was going to tell him, ‘I apologize. I didn’t handle it the right way.’ But it continues to come up. There’s no reason for it. Honestly, I just think it’s trash.”

What bothers Price the most is that Eckersley has voiced interest in moving on and, though he hasn’t yet talked to Price face-to-face, still discusses the matter in interviews. Most recently, Eckersley told the Globe’s Chad Finn that he doesn’t plan on saying “a word” to Price.

“He says he wants to move on,” Price said. “But he continues to go on the radio or do interviews about it. If you want to move on, move on. We’re two men. We can meet. Ain’t nothing going to happen. I yelled at you. I’m sure everybody in here has been yelled at.”

Because ECK needs attention!! Same as every broadcast…hahah 8 pitches are thrown and he’s sitting there talking about something he did 30 years ago (with zero mention of what’s going on)

Really, if anything, that seems to show that Price still doesn’t particularly get the role of the media. (Which makes sense, considering that this whole thing started with Price unloading on Eckersley for Eckersley making a reasonable comment as part of his job as an analyst.) It’s not that Eckersley is still bringing this up out of the blue, it’s that people are still asking him about it (which makes sense, considering that it was one of the stranger MLB controversies between a player and a team broadcaster in a long while). And Eckersley’s response to Finn really seems like about what Price wants if he’d read it more carefully; Eckersley’s just saying he doesn’t plan to address it further with Price. So Price is just mad that Eckersley responded to a question honestly rather than just saying “No comment”? And Price shouldn’t be shocked that past incidents still come up after two years; that really isn’t all that long ago, and stories from longer ago than that are regularly discussed in the sports world.

And where this really got ridiculous was when it came to Price taking personal shots at Eckersley and saying that Eckersley’s former teammates don’t like him. Here’s how Chris Cotillo of MassLive (the website associated with the Springfield Republican) portrayed that part of Price’s diatribe:

“He had an unbelievable career, 25 seasons and he’s a Hall of Famer. I saw his special on MLB Network. It was cool. The one thing that stood out to me was that he had zero former teammates in that interview. Not one talking about him. It was him talking about himself. If anybody ever does a special on me after baseball, I won’t need to go on that interview. I will have former teammates. I will have former coaches. They can all vouch for me. He didn’t have that. To me, that is all you need to know. That tells the entire story right there.”

No, that again tells that Price completely missed the point. Eck: A Story Of Saving (which debuted on MLBN in December) involved Eckersley talking about himself, for sure, as that was the staging of the film. It was based around an interview he did on stage at the Cabot Theater in Beverly, Mass. But there sure weren’t “zero former teammates,” as the MLB Network release about the film indicates:

Maybe Price tuned out before it got to those other interviews. Or maybe he’s just being disingenuous again. But it’s quite funny to see him still making a big deal out of the 2017 incident by claiming that Eckersley’s the one who keeps bringing it up (wrong), and also claiming that no former teammates or coaches liked Eckersley enough to sit for interviews about him (categorically false, as that documentary shows). There can be things to criticize Eckersley for (Blue Jays’ pitcher Marcus Stroman had a much more legitimate grievance last month, going after Eckersley after Eckersley called his strikeout celebration “tired,” funny considering that Eckersley himself was known for plenty of on-mound celebrations), but Price sure doesn’t seem to be hitting on them. Instead, Price is holding a grudge two years later over an incident where he was the one who behaved badly, and he’s even misrepresenting the way Eckersley’s spoken about it.