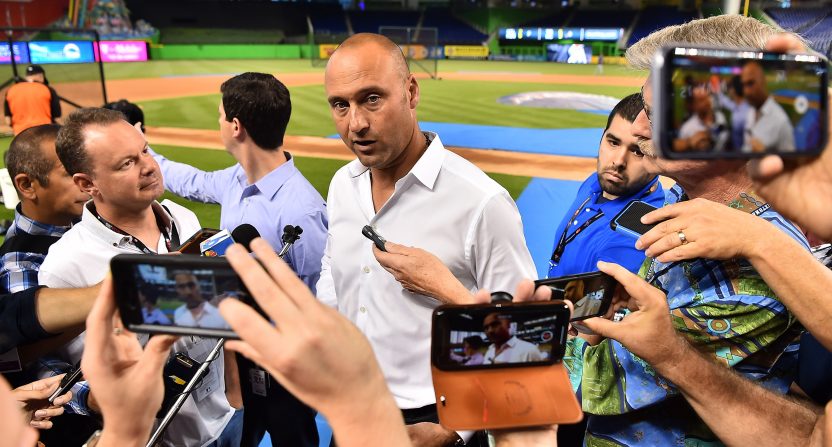 If you’re scoring at home, charge another error on the shortstop turned owner.

Derek Jeter is accumulating more misplays in the Miami Marlins front office than he ever did on the field. The latest embarrassment came when the team revoked a sports radio host’s credential credentials over an unflattering report about the British Virgin Islands corporate address of the Miami Marlins being simply a post office box.

Silly, vindictive, petulant and stupid. Over decades, the sports world has grown accustomed to the Marlins making bad moves. But now, all those decisions are on Jeter’s tab. His name is on it. The Jeter brand has taken a turn for the absolute worse.

It wasn’t long ago that Jeter was the beloved face of Major League Baseball. The Captain – on the strength of playing for the New York Yankees and winning five World Series championships – was the biggest name in the sport for a generation of fans. Jeter was almost always in the postseason. He enjoyed success and its spoils, gracing magazine covers and starring in commercials. He was the closest thing to Michael Jordan when it came to being associated with winning.

Jeter was a transcendent star. Everybody recognized him, even if they couldn’t name another major leaguer. He dated celebrities (Mariah Carey, Minka Kelly, Adriana Lima, the Jessicas (both Alba and Biel)) and yet somehow managed to avoid tabloid pratfalls that often consume other New York City luminaries. The closest thing to a scandal he ever endured was the infamous gift bag story – a tale that Jeter has repeatedly denied.

Jeter copied Jordan when it came to his public image: smile, be polite, say nothing. He revealed little about his personal life. All you knew was whatever the commercials led you to believe. He gave useless quotes to the media who were simply left to write about his excellence as a baseball player. When you’re a superior athlete, sometimes greatness speaks for you. No one would have given a rat’s ass about Jeter if was charismatic .170 hitter.

However, being smart, engaging and media savvy doesn’t hurt and often helps. Jeter wasn’t any of those things as player. He didn’t need to be. Jeter enjoyed a wonderful career. Success was his public relations spokesperson.

When Jeter retired and transitioned to part-ownership and management, he thought his on-the-field success would buy him credibility. Or at the very least, people would grant him the benefit of the doubt. Few questioned Jeter The Player. He always had the answers the success. Surely, no one would question Jeter The Owner.

He was wrong. More wrong than anything he’s ever been in his whole life. Much like Jordan underestimated front office work when he went to the front office, Jeter has made similar mistakes. But he has also compounded his problems by making a series of avoidable errors that have sullied his once untarnishable image.

The Marlins fan base was already suffering from PTSD caused by Jeffrey Loria’s ownership. Loria’s business decisions included a shady stadium deal and not investing in the team. He became of one of the most hated owners in sports. The sale to Jeter’s ownership group last fall should have been seen as improvement. But in Jeter’s first season, he has already done plenty to alienate Miami fans.

He kept the payroll one of the lowest in baseball and defended it by saving that signing free agents wouldn’t have made a difference. Bereft of talent, the Marlins (18-30) have the second worst record in the National League and the worst run differential in the league (minus-86). Not surprisingly, Miami is dead last in attendance too (10,603 per game).

And that’s just on the field. He has stoked the wrath of the fans with other moves. He asked out-going Marlins president David Samson to fire people, including Marlins legends Andre Dawson, Tony Perez, Jack McKeon, and Jeff Conine. And oh by the way, Jeter is contractually incentivized for cutting team payroll.

Jeter even managed to become a punch line in something that wasn’t originally his fault. Miami and Miami-Dade County are suing to recover a share of the profits from Loria’s $1.2 billion sale of the team. In a humorous legal maneuver, the Marlins are claiming corporate citizenship in the British Virgin Islands. Jeter might not have anything to do with the legal strategy, but he stepped in it when he revoked Andy Slater’s Marlins credential.

When Loria was the owner, he was smart enough to have Samson be the public face of the Marlins. Samson took all the criticism and all the bullets. But he did his job well. He got the team a new stadium in midst of a recession and while disliked by many, he seemed comfortable in that role and was savvy.

Jeter is the face of the franchise for Marlins majority owner Bruce Sherman, who stayed out of the spotlight. You don’t hear his name often when people bitch about the team. Nope, Jeter takes the bullets and criticism. It’s not a role he has done before or is comfortable with.

When Jeter faces criticism, like he did the HBO Real Sports interview with Bryant Gumbel, he comes across as defensive, evasive, and dismissive. He talks like someone who is not accustomed to being questioned because he rarely was challenged by the media when he was a player.

Jeter rationalizes the Miami’s player moves by saying he’s trying to build a championship team from the ground up. (Don’t say tanking!). He points to the Chicago Cubs and Houston Astros as examples of teams that suffered a lot of losing but cashed in on their homegrown talent to win World Series.

That can happens in baseball., You accumulate assets, first-round picks and developed well and get lucky. But need to find that raw talent first. The Marlins’ farm system entered this season ranked No. 19 by Baseball America and have been in the bottom five each of the past four years.

Jeter is asking for trust that hasn’t been earned. The fan base has good reason to be skeptical. After winning World Series in 1998 and 2003, the Marlins conducted fire sales. After the stadium was built in 2012, they got rid of players again. And now, Jeter is doing his own rebuild.

The Marlins don’t deserve the benefit of the doubt due to its long history of betraying the fans. Does Jeter? He’s new and should be allowed to grow into the job. But Jeter also must own the mistakes he’s made so far. He can’t afford to be tone deaf as the criticism keeps getting louder.