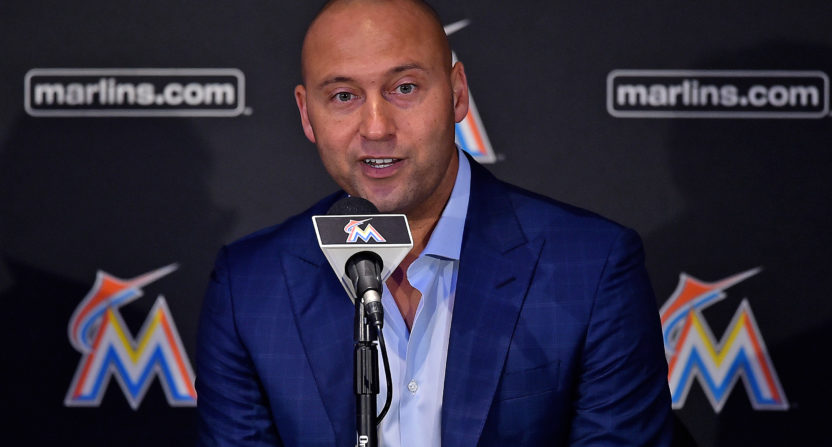 On Wednesday, Marlins CEO Derek Jeter held a 30-minute question-and-answer session at the Greater Miami Chamber of Commerce Trustee Luncheon and peddled the same explanation for his team’s teardown that he’s been pushing all offseason. Via ESPN:

“We have a long-term strategic plan to make this organization sustainable over time,” Jeter said. “The only way to do that is to invest in our minor league system, player development and scouting. The only way you can be sustainable is you have to have a pipeline of players that are coming up through the organization. From my initial press conference, I mentioned that there were going to be some unpopular decisions that are going to be made, but just know that every decision that we make is for the betterment of this organization. I played for 20-plus years and, trust me, when I was a player I didn’t have a lot of patience. It was pretty simple. You either win or you lose. And it’s the same thing now in an ownership position, is you win or you lose.”

Jeter’s reassurances likely comforted some Marlins fans concerned that the team had traded away arguably its four best players (Giancarlo Stanton, Marcell Ozuna, Christian Yelich and Dee Gordon) and appears headed for the NL East basement. But Jeter’s remarks should not have put anyone at ease because in reality they are pure, unbridled nonsense. The Marlins may care about winning in some distant, abstract way but at the moment, they clearly care far more about making money.

Even before buying the Marlins last fall, Jeter and his moneyman Bruce Sherman were dropping hints that profit was more important to them than on-field success. As reported by the Miami Herald, Jeter and company promised investors last summer that they would slash payroll dramatically — to the point that the Marlins would be baseball’s cheapest team. The Herald later obtained a memo in which Jeter reiterated his plan to cut salary, with the express goal of turning a sizable profit in his first year at the helm.

The Marlins’ single-minded desire to save money was clear during every step of the drawn-out Giancarlo Stanton trade saga in November and December. If Miami were truly interested in helping its improving its team’s outlook, it would have gauged the market for Stanton, weighed various offers, discussed the outfielder’s willingness to waive his no-trade clause and ultimately dealt him only if the right deal came along.

But because Jeter was desperate to purge Stanton’s large contract from the team’s books, he forfeited all leverage, threatened his best player and eventually failed to recoup even one top-100 prospect for the reigning MVP. Jeter could have almost certainly secured a better return by agreeing to eat a larger chunk of Stanton’s salary, but because the trade was transparently about saving more than winning, he instead settled for B- prospects.

Sure, Miami got better value for Ozuna and especially Yelich, but after the Stanton debacle it’s difficult to believe the Marlins are being motivated by anything but finances. And given revenue sharing income, national TV money and the $50 million every team will get from MLB’s sale of BAMTech, the franchise didn’t need to cut payroll to stay afloat, no matter how much Jeter complains about poor attendance at Marlins Park. The front-office cut payroll to please investors, and that should make fans furious.

If Jeter and Sherman want to run the Marlins like a cold, calculating business, maybe that’s their prerogative. (Or, considering they play in a publicly financed ballpark, maybe it isn’t.) But for Jeter to pretend this offseason has been all about improving the organization is completely and totally disingenuous.