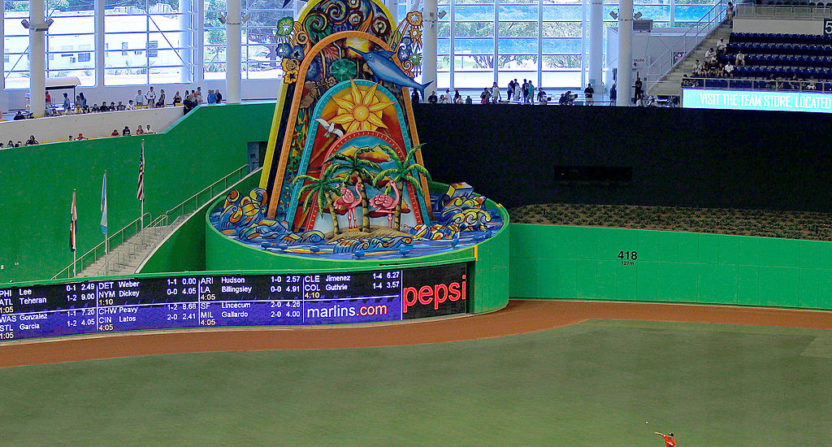 Derek Jeter’s Marlins reign started off poorly, and things haven’t really gotten better. Granted, the 2018 season wasn’t the disaster many predicted; the Marlins will end up with the worst record in the National League, yes, but unlike the Orioles and Royals they won’t lose 100 games.

Still, Jeter’s leadership has won over some, including Marlins Man, who the team even signed to a one-day contract for reasons unknown. One Jeter adversary that hasn’t budged, figuratively or literally: the home run sculpture.  Shortly after Jeter took over, he voiced his desire to dismantle the sculpture that has been essentially the only memorable thing about the Marlins since they moved into their new stadium/fleecing of Miami residents back in 2012.

This is what we wrote at the time:

This is a travesty. There’s nothing more predictable than Jeter, whose homes probably contain no design touches that feature non-neutral tones, wanting to rip out whatever personality and fun the Marlins have right now.

Read this description from the same article, and tell me it’s not the perfect artistic rendition not just of Miami baseball, but of Miami itself:

Festooned with a carnival’s color spectrum, the work by pop artist Red Grooms comes to life when the Marlins hit a home run, as marlins emerge from the sculpture’s base and fountains spray skyward.

Feelings are reportedly split on the edifice:

It’s become a lightning rod for fans — some see it screaming “Miami,” others a garish distraction.

That’s perfect, because it pretends that those two things are somehow mutually exclusive. What identity does Miami have as a city if not as a place filled to the absolute brim (South Beach) with garish distractions? Have none of these people played Vice City?

Of course, at the time, the main obstacle was cost, and the fact that the sculpture was hardwired into the stadium infrastructure. Now Jeter is approaching the problem differently, by proposing the sculpture be moved outside the stadium.

Via Douglas Hanks of the Miami Herald:

The Marlins are pitching the concept as a win for public art, since daily passersby are bound to outnumber the ticket-holding spectators who can currently watch “Homer” launch into action at a stadium that this year drew the smallest crowds in Major League Baseball. But the 81-year-old New Yorker who could veto the plan, “Homer” sculptor Red Grooms, continues to resist moving his seven-story monument to beachside baseball away from centerfield.

“I don’t want to take him out,” Grooms said of “Homer,” which he created on a commission from Miami-Dade before the county-owned ballpark opened in 2012. The mechanical sculpture is festooned with carnival colors and equipped with a fountain and jumbo marlins and seabirds that start spinning and revolving whenever the home team hits one over the fence.

If it does move outside, Jeter and the Marlins hope to replace it with a new standing-room section:

The Marlins front office sees the sculpture relocation as a key element to a major refresh of Marlins Park, with a new standing-room area where “Homer” stands now that would target a younger crowd with tickets priced below the current minimum cost of $12.

“A lower price point for single-game buyers really attracts [the] millennial market,” said Chip Bowers, president of business operations for the Marlins. “We want to come up with a seating plan that appeals to a different demographic.”

He described “Homer’s” current home being transformed into a three-tier structure, with the lowest floor reserved for large groups. The upper two levels would offer all ticket holders a place to stand and watch the game on one side and admire the sights outside the park through the retractable glass walls on the other.

While it would certainly be a shame if the stadium lost the only real bit of entertainment it has to offer, there would be at least one upside to moving it outside the park: people would no longer be required to pay for Marlins baseball in order to see it.