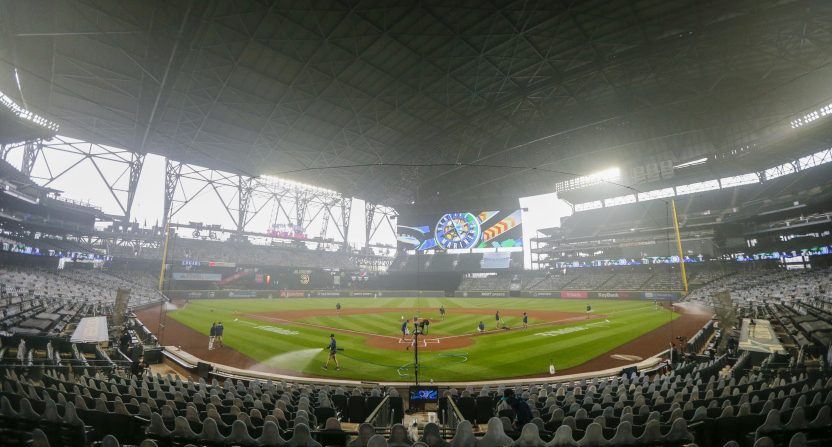 The wildfires ravaging the West Coast have led to all sorts of unusual sights, including baseball being played in San Francisco and Oakland last week amidst an orange sky and falling ash. (The Giants did later wind up postponing two weekend games, but that was over a COVID-19 test, which wound up being a false positive.) However, while the landscape there was ominous, the Bay Area air quality was reportedly safe at that point (it’s since gotten worse, and is now “some of the worst in the world“), so the games went ahead. But Monday brought a perhaps more concerning situation still in Seattle, with the Mariners hosting the A’s in a doubleheader, and doing so despite clouds of haze and numerous air-quality warnings:

Pretty hazy inside T-Mobile Park, but game on as doubleheader with A’s will start at 2:10 pm PT as scheduled. pic.twitter.com/9kpFe48pRg

Some players wore masks during the game, including A’s center fielder Ramón Laureano. He made a great catch while keeping his mask on:

We wouldn't believe it either if it wasn't Ramón #RootedInOakland pic.twitter.com/albQjN8yTv

Meanwhile, plenty of Seattle businesses (those not already closed due to COVID-19) shut down Monday, and local officials sent out quite the encouragement to stay indoors (via Capitol Hill Seattle):

Air quality will be Unhealthy, Very Unhealthy, and Hazardous across most of Western Washington today due to abundant smoke near the surface. Very Unhealthy to Hazardous air quality means everyone should stay indoors. Avoid all strenuous activity. Close windows and doors if it’s not too hot, set your AC to recirculate, and use HEPA air filter if possible. People with heart or lung disease, or those who have had a stroke, should consult their health care provider about leaving the area and wearing a properly-fitted respiratory mask if they must go outdoors. Follow burn bans and evacuation orders.

Here are some further quotes on that from  Dr. Phil Swartzendruber of the Puget Sound Clean Air Agency, via local radio site MyNorthwest.com:

The Puget Sound Clean Air Agency recommends staying indoors with the windows closed as much as possible.

The agency’s Dr. Phil Swartzendruber told CBS that people are inhaling what is essentially microscopic tar and creosote, similar to what might collect in your chimney.

“That’s essentially what the smoke is,” Swartzendruber said. “So that’s getting deep into the lungs and penetrating into the lungs. That can aggravate the system, can cause a stressor on the heart and lungs.”

As per the National Weather Service, the current air quality alert for the region has been extended through Thursday. So that could make things not great for the Giants’ scheduled games against the Mariners Tuesday and Wednesday as well.

It’s somewhat understandable why everything possible is being done to play these games. This year’s shortened season and the adjustments it’s seen thanks to COVID-19 postponements have created quite a schedule crunch for many teams. That includes the A’s, who are currently playing four games in three cities in 57 hours; they lost to the Texas Rangers in Arlington Sunday in a game starting at 2:40 p.m. Eastern, then flew to Seattle for a makeup doubleheader of games postponed from Sept. 1 and 2, and then will fly to Denver for an evening game (8:40 p.m. Eastern) against the Rockies tomorrow. So there’s no easy way for them to make up these games if they were moved again, and there’s no indication that the air in Seattle will be better any time soon. And Monday afternoon did see Seattle’s air improve slightly thanks to some rain showers, so it’s not quite as dire as it had been earlier in the day.

But at the same time, there are definitely some concerns about playing games with the air quality so bad. As Susan Slusser of The San Francisco Chronicle wrote Monday, A’s manager Bob Melvin has mentioned that team and league officials are concerned when the air quality index is above 200 (“very unhealthy”), and as the NWS Seattle tweet above shows, the AQI was above 300 (“hazardous”) in much of Seattle early Monday. So there are certainly some potential issues there. And those issues may continue throughout this week.