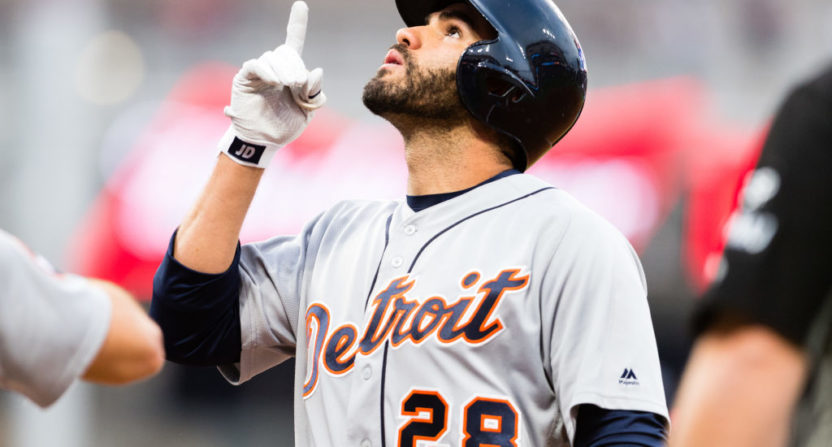 The Arizona Diamondbacks needed to shore up their lineup as they hunt for a National League Wild Card bid, and they took a major step towards doing so by acquiring Detroit Tigers slugger J.D. Martinez via trade on Tuesday. The deal was first reported by MLB Network’s Jon Morosi.

The 29-year-old was set to be a free agent after this season. Martinez was hitting .305 with 16 homers and 39 RBIs on the year, and that’s not an empty average; his slash line includes an OBP of .388 and a slugging percentage of .630. He also rakes against left-handed pitching, hitting .474 so far this season with six homers in just 45 plate appearances.

Even if he doesn’t match those numbers for the rest of the season, Martinez is still a huge pickup for the Diamondbacks, as he helps a lineup that hasn’t seen much production out of its other left fielders.. He was in his fourth season with the Tigers, two years removed from his lone All-Star season in which he hit 38 homers.

Martinez should see his offensive numbers flourish thanks to the hitter-friendly confines of Chase Field (not to mention plenty of games ahead at Coors Field). Of course, Martinez could be a liability on the defensive end, but the team seems willing to roll the dice that the former will outweigh the latter.

In return for Martinez, Arizona sends infield prospects Dawel Lugo, Sergio Alcantara and Jose King to Detroit. Lugo was ranked as the fourth-best prospect in the Diamondbacks’ farm system. It remains to be seen if the deal will benefit the Tigers in the long run.

General consensus from three scouts who recently have canvassed the D-backs' system: The Tigers' return for J.D. Martinez was very light.

Kudos to Arizona for going for it, though if you’re not giving up very much anyway, it doesn’t make much sense not to.