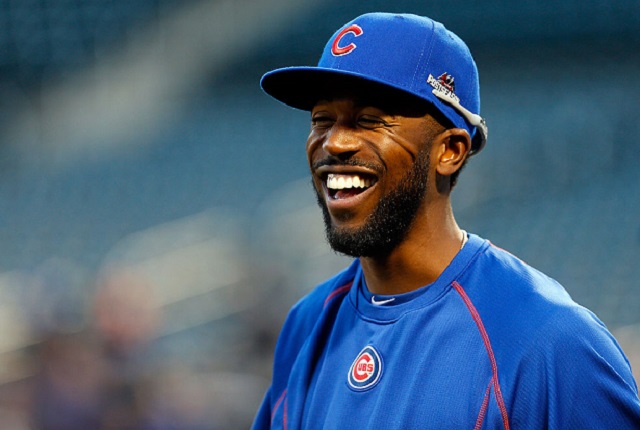 Update: Fowler’s agency is throwing hot fire at the media and the Orioles.

In a surprising development, Dexter Fowler re-signed with the Chicago Cubs on Thursday. But wait a minute — hadn’t the outfielder already agreed to a deal with the Baltimore Orioles earlier in the week?

Reports throughout Major League Baseball circles during the past two days indicated that Fowler was about to join the Orioles on a three-year, $35 million deal. But he obviously took a strange journey back to Cubs blue, spring training in Mesa, Ariz. and the friendly confines of Wrigley Field.

The news that Fowler’s deal with the O’s was no longer happening and that he had decided to return to the Cubs on a one-year deal (with a mutual option for 2017) was broken by the Chicago Tribune‘s Mark Gonzales.Dexter Fowler surprisingly signs with Cubs, after previously agreeing to deal with Orioles

Dexter: "this is where my heart is." Confirms he turned down 3-yr offer from another team

According to Gonzales, the terms of Fowler’s agreement with the Cubs are as follows:

Oh, and if you needed proof of the deal being done, that this wasn’t some hoax, here’s Fowler and the Cubs brass together at Spring Training Thursday morning:

In a day and age of leaks from every direction, Theo Epstein and the Cubs front office have pulled off one of the better underground moves in recent MLB history. Swiping a player with a three-year, $35 million contract agreement right out from under the team at the last minute will surely become the stuff of legends in baseball front offices.

How did Fowler go from being an Oriole to a Cub in a matter of a day? According to Bruce Levine of Chicago’s 670 The Score, Fowler wanted the en vogue feature seen in so many free agent contracts signed this offseason. He wanted the opportunity to opt out early in the deal, probably after one year. Clearly, the Orioles weren’t keen on that request.

This new development also clarifies what was seen as a strange trade announced less than a half-hour before Fowler arrived in Mesa. In that deal, the Cubs sent outfielder Chris Coghlan to the Athletics for pitcher Aaron Brooks. Why would the Cubs trade away an outfielder and hurt their depth at that position? Now we know.

Fowler and Coghlan were similar offensive players last season, both batting .250 with on-base percentages in the .340s. Their power numbers were also nearly identical, as Fowler knocked 17 home runs while Coghlan hit 16.

With Fowler now in the mix, Cubs manager Joe Maddon has a wealth of outfield combinations to choose from, including new addition Jason Heyward, incumbent right fielder Jorge Soler and slugger Kyle Schwarber. Will Fowler be penciled in for left field? Ben Zobrist and Javier Baez also provide further depth at the position, giving Maddon all kinds of options to consider, depending on the opposing starting pitcher and who might need rest on a particular day.