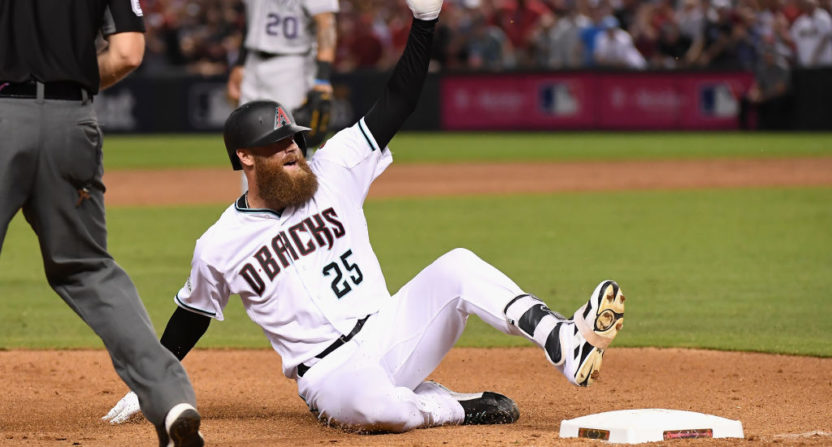 If these electric wild card games were any indication of how the rest of the postseason will go, get hyped.

Following the Yankees’ memorable win Tuesday, Colorado and Arizona faced off Wednesday in an unforgettable National League wild card game that reminded us why we fell in love with baseball.

The Rockies played with grit and bottomless determination. The Diamondbacks strutted their power like a warning sign to the Dodgers that they’re coming for Los Angeles. Torey Lovullo is entering the NLDS in his first season as an MLB manager with an army at his back that’s capable of reaching the World Series.

The D-backs parked an early lead with a three-run rocket off the sweltering bat of Paul Goldschmidt in the 1st. Then Ketel Marte tripled and Daniel Descalso skied a two-run shot for a 6-0 Arizona edge all before the 4th inning.

Ace Zack Greinke entered his 10th postseason start with a 3.55 playoff ERA and handled the Rockies’ lineup the first time around. But Colorado cracked him on the second, using small ball to put up a four-run 4th, all charged to the 6’2’’ righty.

Yet, none of that drama was a match for Archie Bradley — the D-backs’ 25 year old relief pitcher from Oklahoma that had a night so absurd, it can’t be fiction. Bradley hustled out of the bullpen for one out to end the top of the 7th. Batting in the nine-hole, he scored two key runs for an 8-5 D-backs lead on his first extra-base hit, becoming the first reliever to hit a triple in the postseason.

The young star was amped up, and it showed. A few breaths later, he went back out to pitch the 8th and, just for a moment, let his emotions get the best of him. Nolan Arenado and Trevor Story brought Bradley down to earth and deflated a cheerful Chase Field with back-to-back homers to cut Colorado’s deficit to 8-7 in the 8th.

By the end, the Rockies rallied twice and fell just one run short after each enthralling attempt, leading to the 11-8 loss. It was a bittersweet ending for a team that went out by showcasing the exceptional talent that deposited them in the postseason in the first place.

Carlos Gonzalez fittingly scored the Rockies’ final run of the season on what could possibly be his final at-bat in a Colorado uniform. Then, Nolan Arenado threatened his second home run of the game by snaring foul balls to the upper deck in left. But he bit on a low heater, grounding out to short to end Colorado’s defining season.

The D-backs march to Los Angeles knowing some things don’t change (like Goldy crushing homers no matter the month), while realizing that some things do (like relievers hitting two-run triples).