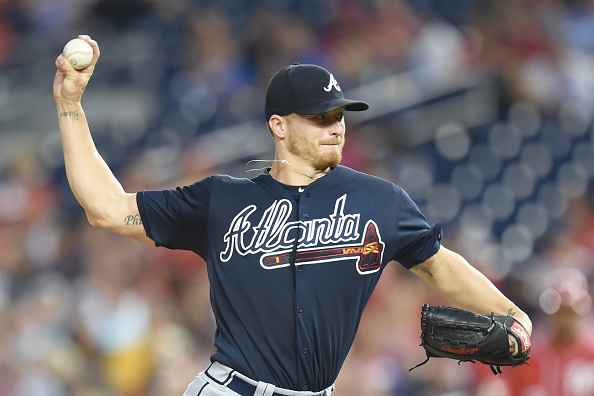 I told you last week that the Diamondbacks weren’t done after signing Zack Greinke and with all the places they were looking (including at free agent Mike Leake and trading for Aroldis Chapman), they were bound to ultimately get someone. That someone was the pitcher they had targeted since the beginning of the off-season, Shelby Miller and the cost was substantial. Joe Lucia covered the basic aspects of this blockbuster on Tuesday night, but it’s time to look deeper to see how the biggest deal of the Winter Meetings so far affects the team that’s contending, rather than the team that’s selling.

Officially, the deal sent 2015 first overall draft pick Dansby Swanson, Aaron Blair, and Ender Inciarte to the Braves in exchange for Miller and Gabe Speier. Speier is a 20 year old A-ball left-handed relief pitcher who has been decent in two years, but didn’t do much to balance this deal. The other names, however, are each a big deal on their own.

Desperate to add pitching, the Diamondbacks are known to have approached two teams for young, controllable star pitchers, the Indians and the Braves. When they asked Cleveland for Danny Salazar, they responded by asking for A.J. Pollock as a starting point. When the DBacks asked the Braves for Miller, they got a similar response. Considering his All-Star berth and top 15 MVP campaign in 2015, it’s not really surprising that teams would be interested in the slugging outfielder who stole 39 bases and crushed 65 extra base hits in his breakout season.

On the other side, the Diamondbacks couldn’t possibly part with Pollock and still expect to contend in 2016. As much as the rotation was a problem, Pollock (6.6 WAR) and Paul Goldschmidt (7.4) accounted for 47% of the team’s offensive and defensive WAR, with no other player earning a WAR above 3.7 individually. Those two players are so integral to the Arizona offense that they can’t bare to spare them and the signing of Greinke proves they want to win right now.

In order to keep Pollock, it cost the Diamondbacks a large part of their future. The starting pitcher Blair made his AAA debut last year and will likely break into the majors this year, but he won’t be incredibly missed as both of the starters added by the DBacks should be around for at least three seasons. In fact, with Patrick Corbin and Robbie Ray moving back in the rotation, they should have one of the best rotations in baseball now for at least a few seasons. Chase Anderson and Archie Bradley are also solid contenders for that fifth spot who could provide more than just depth in the coming years.

While losing Blair isn’t that big of a deal, losing Inciarte is. As mentioned, no DBacks hitter had a WAR above 3.7 (David Peralta), but Inciarte’s 3.3 was fourth on the team. He provided incredible defense as did Pollock, a necessity in Chase Field’s spacious and oddly shaped outfield. Losing his glove, bat, and speed (21 steals in 2015) will really hurt the DBacks offense to the point where they may now be in the market for a bat after filling out their rotation.

The final, and biggest, piece given up by Arizona shows how serious they are about winning right now. Very rarely is the number one pick in any draft traded while he is still in the minor leagues. let alone after just half of a season (which was impossible before this season, but the point still stands). Simply having the title of “number one overall pick” comes with prestige and high expectations and Swanson is considered to be worthy of the pick.

Even with his seemingly limitless potential, Swanson is just 21 and probably two to three years away from his MLB debut, even further from producing at the level expected of him. With the Diamondbacks looking to compete now, he turned into a tradeable asset and they will figure out the future of short stop later.

Now, it’s on to Miller. In 2015, the Diamondbacks’ top five starters accumulated a WAR of 6.3. Removing Jeremy Hellickson and Rubby de la Rosa and replacing them with Greinke and Miller raises that number all the way up to 14.5. While these are numbers from 2015, the chances are that while Greinke’s overall production will drop, Anderson, Ray, Corbin, and Miller should all be even better. In general, simply playing in front of the Diamondbacks’ defense (6th best in baseball in 2015) instead of the Braves’ (13th best) should lead to some improvement even if the fact that he is only 25 wouldn’t lead to higher expectations on its own.

After housing the third-worst rotation in 2015, Arizona stands to jump into the top ten with the addition of Miller. While the loss of Inciarte hurts their defense (and those who are fans of both the DBacks and Orson Scott Card), the value added by Miller should far surpass that loss. Not looking to spend much more this off-season than they already have, the Diamondbacks did the best they could to fix an immediate problem while placing the cost on the future. If it works, and they return to the World Series for the first time since 2001, no one will be able to complain when Swanson is an All-Star ten years from now.

I’m just kidding. People will definitely complain about that, even if there’s another World Championship banner hanging at Chase Field.