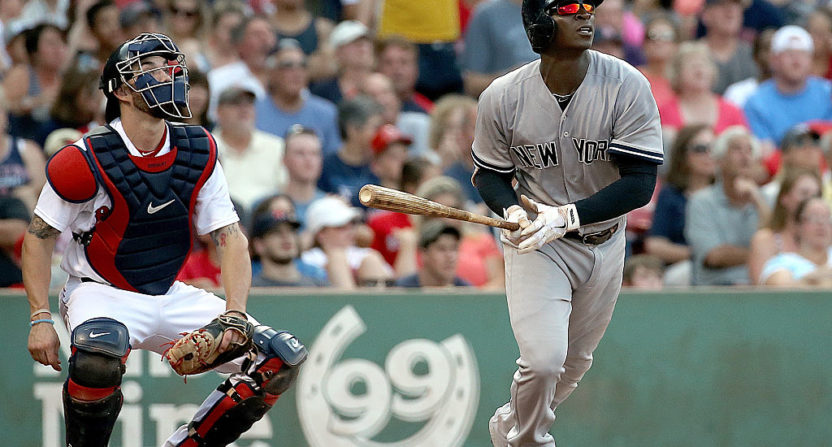 We often talk about monster home runs, such as the 500-plus-foot shots New York Yankees’ right fielder Aaron Judge smashed during the Home Run Derby, or the 495-foot one he hit last month, but one of Judge’s teammates did something remarkable at the other end of the scale on the road Sunday against the Boston Red Sox. That would be shortstop Didi Gregorius, who hit one of the shortest home runs ever recorded, a ball Statcast estimated as travelling only 295 feet:

According to MLB, Fenway Park measures 302 feet down the right field line by Pesky’s Pole (named after former light-hitting Red Sox infielder Johnny Pesky), and there is a certain margin of error with Statcast. However, there’s also long been a debate about if that pole’s actually 302 feet from home plate; author Robert Weintraub wrote in his The Victory Season: The End Of World War II And The Birth Of Baseball’s Golden Age that “aerial photography has shown the pole to be only 295 feet from home.” So maybe Statcast is right and the listed numbers are wrong.

In any case, Pesky’s Pole is the shortest distance from home plate in the majors, so Fenway is one of the very few places where this Gregorius hit is a home run. Short home runs that just pass the pole don’t happen as much as you might think, though, and especially not from left-handed batters like Gregorius thanks to the way the wall curves. As David Kagan wrote at The Hardball Times in a 2014 article called “The Physics Of Pesky’s Pole,” a data analysis shows the shortest home runs around the pole tend to come from right-handed batters:

Let’s compare the averages for the righties versus lefties. The table below shows the average distance, speed, and horizontal angle. The right handed batters have a lower speed resulting in a shorter distance on average. They also have a larger horizontal angle.

Does this make sense based upon the physics of a batted ball? Well, it better! Remember, a lefty is pulling the ball around Pesky’s Pole while a righty is going the other way. As explained in “The Physics of a Foul Down the Line“ a ball hit down the line has two sources of sidespin to push the ball toward foul territory.  One is due to the angle of the bat with respect to the line between home and second base. The other is due to the ball colliding with the bat above bat’s midline.

For the lefty pulling the ball, the two spins tend to cancel while for a righty going the other way, they tend to add. The sidespin for the righty will therefore be larger than for the lefty. So, the ball will bend more strongly toward foul territory for the righties.

The data agrees. Right-handed batters need shorter distances and lower launch speeds to wrap the ball around the pole. They can also get away with launching the ball at angles further away from the foul line.

So, yeah, this Gregorius home run was a very unusual one on multiple levels.

1 thought on “Yankees’ shortstop Didi Gregorius hit a 295-foot home run, one of the shortest ever”