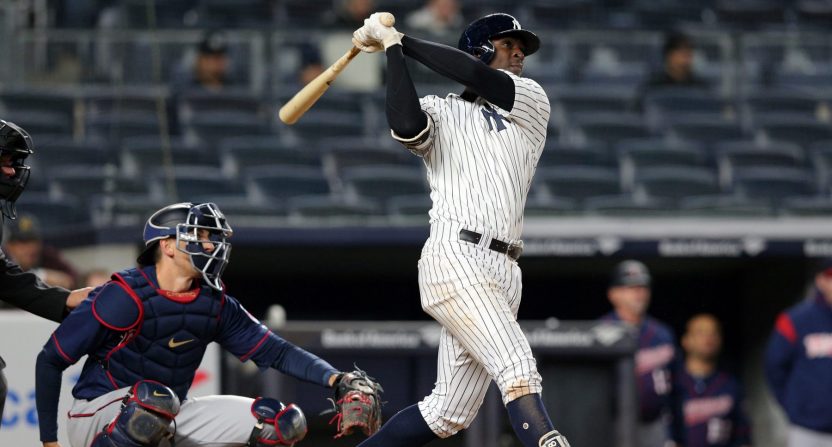 When the Yankees acquired Didi Gregorius from the Arizona Diamondbacks in December 2015 (giving up Shane Greene in the three-team deal), the 24-year-old shortstop was not supposed to turn into any sort of star. During brief stints in Cincinnati and Arizona, Gregorius had proven himself a capable defender and a playable hitter, but his career .243/.313/.366 batting line did not hint at any All-Star berths to come.

But over three seasons in New York, Gregorius improved in virtually every facet, becoming one of baseball’s best shortstops along the way. He entered this year as a five-tool threat and a borderline All-Star. And then this spring, he went berserk.

So what’s going on? How did a solid player who has never made an All-Star Game put up Bondsian numbers over the entire month of April? Let’s count the ways.

1. He has been way, way more patient

Maybe the biggest thing holding Gregorius back over the first five seasons of his MLB career was his lack of plate discipline. From 2013-17, he averaged only 27 walks per season, making him one of baseball’s least patient hitters. This year, however, he has found a well of patience. Check out these numbers:

Swing rate on pitches outside the strike zone

Not only has that newfound patience helped Gregorius get on base more often, it has also allowed him to hit ahead in the count more often, which will help any hitter’s power numbers. Meanwhile, swinging less often, particularly on pitches outside the zone, has allowed Gregorius to cut down on his strikeouts, resulting in a career-best 10.1 percent K rate. Perhaps no factor has contributed to Didi’s big year more than his willingness to wait for his pitch.

2. He has embraced the fly-ball revolution and benefited from the apparent juiced ball

Gregorius is one of the many players across baseball who has focused on hitting the ball in the air more often and seen his performance improve because of it. In 2015, 34.1 percent of the balls off his bat were fly balls. So far this season, 51.3 percent of them have been. That spike in fly balls has allowed Didi to take huge advantage of what appears to be a homer-friendly baseball. The Ringer’s Ben Lindbergh considered this dynamic in a thorough piece for The Ringer about Didi and his Curaçaoan countryman Andrelton Simmons:

While it’s true that Gregorius has never been a ground ball hitter, he has more than doubled his average launch angle since 2015. And as it happens, “since 2015” has been the perfect period to do that, because that’s also the time during which changes in the baseball’s behavior have caused balls in the air to fly farther. Those changes have disproportionately benefited hitters like Gregorius, whose once-warning-track power is now sufficient to send balls into the stands. Last September, FanGraphs writer and xStats proprietor Andrew Perpetua calculated that Gregorius was the home run hitter who’d benefited the most from the ball flying farther in 2017, estimating that more than half of his homers last season would not have gone out if not for that boost from the ball.

Didi certainly had some good fortune to arrive in New York just as the ball changed and home runs spiked, but he deserves credit for taking full advantage.

3. He has benefited from Yankee Stadium

Yankees fans get testy when you suggest that Gregorius is merely a product of Yankee Stadium’s short porch in right field, correctly pointing out that the lefty hit more home runs on the road last year than he did at home. But if we’re trying to explain Didi’s hot start, we can’t ignore the extent to which he has taken advantage of his home ballpark in 2018.

Whether consciously or unconsciously, Gregorius has targeted Yankee Stadium’s short right-field porch ever more precisely. That progression has paid dividends: Since the start of his Yankees career, Gregorius has generated a .649 weighted on-base average on pulled fly balls (and 25 homers) on the road, and an .816 wOBA (and 38 homers) at Yankee Stadium, in roughly the same number of plate appearances. Gregorius has been in the right place at the right time, but he’s also adapted to take advantage of those circumstances.

Yes, Didi’s numbers would probably drop if he were suddenly asked to 82 games a year in, say, San Francisco, but he again deserves immense applause for fitting his game to his home park.

4. He has experienced some batted-ball luck

If we really want to understand Gregorius’ monster numbers, we have to acknowledge the ways in which they’re the product of small-sample size.

Gregorius’ batting average on balls in play (.314) is not alarmingly out of proportion, which is a good sign. But it is a career high and figures to fall a bit over the course of the season.

Then there’s that aforementioned home run/fly ball rate, more than twice his previous career high. Even with an uppercut swing, a juiced ball and a short porch at Yankee Stadium, Gregorius’ fly balls simply will not continue to fly out of the park at such a rapid pace — or anywhere close to it.

None of that is to say that Didi can’t continue at an All-Star (or maybe even MVP) level. In fact, most signs point to much of Gregorius’ improvement being perfectly legit. He has changed his approach at the plate, taking more pitches and waiting for balls in the zone. He has adapted his swing to capitalize on the ball and his home park. And he has charted a steady rise — from fringe starter to steady everyday presence to stalwart to star — that suggests a thirst for self-betterment.

The 2015 version of Didi Gregorius, who hit barely enough to stick in the lineup, is gone for good. The new and improved version is a force for the American League to reckon with.