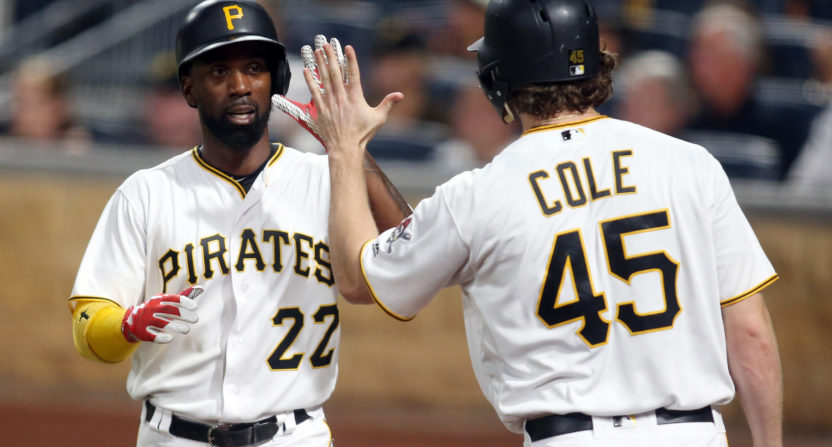 Until this week, the Pittsburgh Pirates had plenty of reason for optimism heading into 2018. With Starling Marte, Gregory Polanco, Andrew McCutchen, Josh Harrison, Josh Bell, Gerrit Cole, Jameson Taillon and Felipe Rivero all between the ages of 25 and 31, the Pirates had a strong in-its-prime core that wouldn’t need too many breaks to compete for a playoff spot. Maybe Pittsbugh had little hope of unseating the Cubs in the NL Central, but a wild-card berth appeared within dreaming distance, especially with another acquisition or two.

And then the Pirates loudly proclaimed their lack of interest in winning next season. They summarily traded Cole and McCutchen — arguably their best pitcher and hitter, respectively — in deals that will almost certainly make them worse in 2018 than they otherwise would have been.

The Pirates’ decision to rebuild represents a striking reality about today’s MLB: Teams see little reason to linger on the fringes of the playoff hunt. Most franchises with no clear path to a division title are giving up early and as a result, baseball’s middle class has disappeared.

Right now, seven teams stand out from the rest, based on both public opinion and projection systems. FanGraphs predicts that the Astros, Dodgers, Indians, Cubs, Nationals, Red Sox and Yankees will all win 91 or more games next year. No one else is pegged to win more than 88 and only two other teams (the Cardinals and Angels) are pegged for more than 84. In four of baseball’s six divisions, the projected gap between the first- and second-place team is 10 or more games.

This dynamic of “haves” vs. “have nots” was starkly present last year, when four of the six divisions were decided by 10 or more games, only one divisional race came down to the final week and the AL wild-card field was so weak that the 85-win Twins slipped in. Only four MLB teams won between 83 and 90 games, the fewest such teams since 2002.

Now, the effect continues to worsen, thanks to a paradoxical feedback loop. If you don’t build a good roster, you don’t have a shot at a division title, so you figure there’s little point in building a good (short-term) roster, so you have an even worse shot at a division title. A handful of teams have built powerhouses, and everyone else has thrown their hands up, simply allowing those behemoths to get stronger.

Of the 14 teams last year that won between 75 and 87 games three (Miami, Pittsburgh, Tampa) have dealt away key players, two (Toronto, Baltimore) have considered dealing away key players, one (Kansas City) has braced for its entire core to leave in free agency, five (Texas, Milwaukee, Minnesota, Seattle, Oakland) have treaded water and only three (St. Louis, Los Angeles Angels, Colorado) have made moves to actually improve their team. Even when you throw in the Giants, who have been busy after a disappointing season, it’s impossible to find more than a dozen teams actively trying to win in 2018.

For this lack of competition, you can blame the second wild card, instituted in 2012 to increase the number of teams competing for the postseason and raise the importance of the division title. In accomplishing that second goal, the added playoff spot has severely undermined the first. Teams rightfully view the wild card as half a postseason berth and figure, why claw all season to win 88 games, only to lose a do-or-die game at the whims of baseball’s randomness? Why risk future assets for a present that holds so few assurances?

Over the past couple years, and this offseason particularly, middle-class teams have seemed content to restock for the long run while letting baseball’s bests cruise to division titles. Sure, these teams have made incremental moves here and there, but they seem entirely unwilling to pull the trigger on a major deal that might bump them from 82 wins to 86 or from 85 wins to 90. For the most part, the only franchises that have forked over serious cash or prospects have been ones that can easily imagine themselves wearing a division crown.

In another generation, maybe some of those middle-class teams could have tricked themselves into thinking they were true contenders, but in an era when every front office features stat-savvy executives who know how to play the odds, most franchises know where they stand and are acting accordingly.

Let’s return to Pittsburgh for a moment. The Pirates essentially faced two options this offseason: 1) Hang onto their stars, add a couple small pieces and pray for a wild-card spot, which means a 50-50 shot at a berth in a crapshoot tournament. 2) Realize their odds are long to make baseball’s real postseason, throw up their hands and begin looking toward 2020, when the Cubs might be fading and the NL Central might again be in play. They chose the second option, and it’s tough to blame them.

This offseason has been painfully slow for many reasons, but this is surely one of them. As many of baseball’s best teams fret over the luxury tax, this winter would have been a great time for some of the sport’s second-tier teams to pounce. But with that group of franchises paralyzed by their indifference toward the wild-card, they have had limited cause for aggression.

Would hope of a full playoff berth have driven the Brewers to sign Jake Arrieta or the Mariners to pursue J.D. Martinez? Would it have convinced the Pirates to hold onto Cole and McCutchen or increased the odds the Orioles would keep Manny Machado? We can’t know for sure, but that seems like a safe bet.

The current world order won’t last forever. Soon, the Phillies and Braves will sneak up on the Nationals, while the White Sox and Twins catch up to the Indians and the Brewers and Cardinals gain more ground on the Cubs. The teams atop the divisions will change, and maybe the transition between regimes will bring some temporary semblance of parity. But the way baseball’s incentives are currently aligned, the game will continue to feature 92-win teams and 78-win teams, with a shortage of the 86-win teams that keep playoff races (and offseasons) exciting.

If MLB views this as a problem, it has two obvious options. It could return the playoffs to eight teams, restoring an extra spot that teams see as worth fighting for (but restoring the issues this new system sought to correct). Or it could expand to eight teams, NBA-style, thereby incentivizing mid-80s win totals (which would likely swing the pendulum too far the other way, sparking a race to the middle).

At least for now, however, we’re likely stuck with a league where a few teams reign and others, like the Pirates, look toward a future when they’re the team everyone else cowers before.