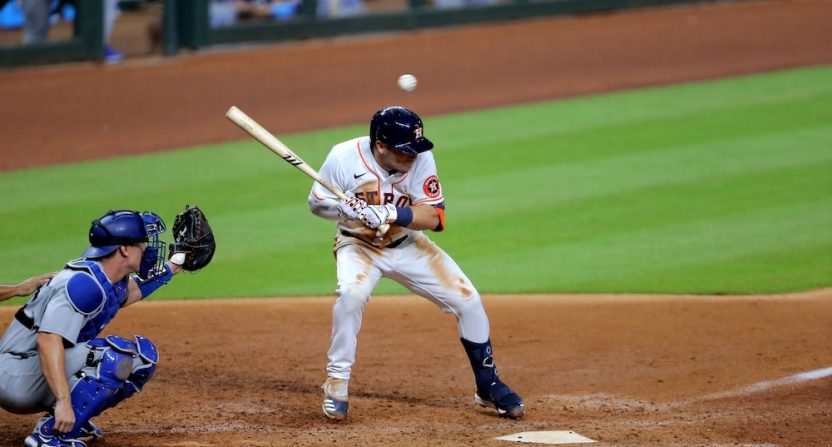 Tuesday was the night that the 2020 Major League Baseball season officially began.

If you’re familiar with comedy writer Megan Amram on Twitter, one of her recurring jokes is “Today was the day Donald trump finally became president.” It’s a gag that can apply to anything that the current president said or did on a particular day, and usually does.

The dust-up between the Los Angeles Dodgers and Houston Astros on Tuesday probably won’t be as evergreen as Amram’s Trump joke. It might even be forgotten by the end of the week, especially if the COVID-19 outbreak currently plaguing the Miami Marlins spreads to other MLB teams and forces further schedule changes or an entire shutdown of the season.

But for at least a few hours at Minute Maid Park, baseball could keep the pandemic talk at a distance (preferably six feet away, of course). The Dodgers’ Joe Kelly throwing at Houston’s Alex Bregman and Carlos Correa reminded us that there are still compelling narratives to follow, stories relating to the actual game on the field.

Carlos Correa has to duck out of the way from an inside breaking ball from Joe Kelly. pic.twitter.com/NabNOVB0Q6

Nobody in the Dodgers’ or Astros’ dugouts seemed particularly concerned about social distancing when play became nasty, tempers flared, and old grudges were revived. Concerns over COVID-19 and disputes over 2020 salaries felt refreshingly distant. This was about the game! And fair play. (Although throwing at a batter’s head should never be excused.)

Kelly and Corra exchanged words after Correa struck out to end the inning. Then the benches cleared. pic.twitter.com/tpSYuRC0Hg

Remember when everybody in baseball — players, coaches, executives, media, and fans — were mad at the Astros for the sign-stealing scheme utilizing video, signals (notably hitting trash cans to notify Houston batters), and buzzers that helped the team win 101 regular-season games and the 2017 World Series?

The Dodgers certainly hadn’t forgotten since they were the team that lost the 2017 World Series to the Dodgers in seven games. There had been some belief that Houston had largely incorporated the sign-stealing during the regular season and it was more difficult in the postseason because MLB kept a tighter check on video replay rooms, monitors near the dugout, and so forth.

Yet MLB Network’s Tom Verducci presented some compelling evidence demonstrating that the Astros were still stealing signs during that World Series and almost certainly knew what Dodgers ace Clayton Kershaw was throwing in their Game 5 matchup.

“Kershaw threw 51 sliders and curveballs that day and got zero swings and misses on them,” Verducci explained. “That alone will make you think something was up.”

Indeed, Astros batters laying off every single one of those pitches seems highly improbable. Kershaw allowed six runs on four hits, three walks, and just two strikeouts in 4 2/3 innings, a result adding to the perception that the Dodgers left-hander struggles in the postseason when the games count the most.

For the past three seasons, the Dodgers have arguably been the most talented team in baseball. (You could even make that argument during the past seven years.) Yet they have two consecutive losses in the World Series in 2017 and 2018 to show for their efforts, each of those defeats to teams that were eventually discovered to have used sign-stealing schemes to cheat their way to victory.

So when the truncated 2020 schedule was finally released — featuring a format in which teams would play in geographic regions divided into West, Central, and East — and the Dodgers and Astros were paired up for four out of each club’s 60 games, the 2017 World Series runners-up had an opportunity to take out their frustrations and exact a little bit of vengeance.

Regular-season rematches from postseason matchups, especially championship clashes, are often overblown. Even if the loser wins the rematch, the other team already won the title.

Sure, maybe it feels good to get some revenge but it doesn’t change the larger result. The Dodgers aren’t going to gain the 2017 World Series title by beating the Astros in their four regular-season games. (But if they meet again in this year’s World Series, watch out!)

A closer look at Joe Kelly's reaction after he struck out Carlos Correa. Benches cleared shortly after. pic.twitter.com/cDcSVoS0Hz

After all that tension and drama dissipated, the Dodgers ended up winning the game, 5-2. Talking about a score almost feels normal, doesn’t it?

For the Astros, they surely wanted the win and losing puts them in a tie with the Oakland Athletics atop the AL West.

But for the Dodgers, this felt like an important win. Not for revenge against the Astros, but showing they had a pulse after two lackluster losses at home to the rival San Francisco Giants and a flat first four innings versus the Astros. At 3-2, the National League favorites are a half-game behind the San Diego Padres and Colorado Rockies in the NL West.

We’re in the very early days of the 2020 MLB season and even with only 60 games on the schedule, there is still plenty of baseball remaining to be played. It’s nice to talk about that, even for just a while, rather than all of the uncertainty and anxiety surrounding the sport and plaguing our culture.