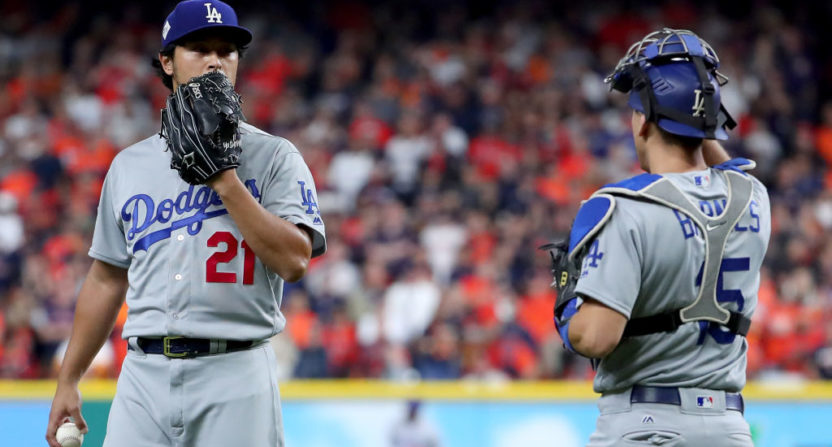 After a season of evidence that the composition of MLB’s baseballs were resulting in a home-run surge, the ball is once again drawing suspicion from Major-League pitchers.

According to a report from Sports Illustrated’s Tom Verducci (which you should really read in full), pitchers and coaches on the Dodgers and Astros agree that the ball they’re using in the World Series is slicker than the one used in the regular season. That, they say, is making it more difficult for them to throw certain pitches, particularly sliders. This theory would help explain why Dodgers starter Yu Darvish and Astros closer Ken Giles, both of whom rely heavily on their sliders, have struggled in the series.

“I’m not taking anything away from the players. I just want to know why? Why in the world would the baseballs in the World Series be different? Because you can see the difference. You can feel it. I don’t understand it at all.”

“It’s obvious,” Strom said about the World Series ball being slicker. “You can see it and you can feel it. It’s not the same. Someone’s got to explain to me why.”

“Yu noticed the difference. He told me the balls were slicker and he had trouble throwing the slider because of how slick they were. He wasn’t able to throw his slider the same way.”

“I know guys have been talking about the ball. I also know that MLB has been talking for a while about maybe a ball that’s more like the ball in Japan, where the leather is tackier so that you can use it right out of the wrapper. I think something has to be done.”

“It affects running my two-seamer in to righthanders,” said Morton, who hit 97 mph with his two-seam fastball. “When the ball is slick you can’t throw in with the same aggressiveness. If you don’t have control of the baseball, you might end somebody’s career. That’s a very bad thought to have in your head.

“Tonight, it’s the World Series. So you do everything you can to block out everything. You’ve got to focus with every pitch. But I don’t know, maybe it’s the placebo effect, but if that’s what you’re thinking about it does affect your conviction on certain pitches.”

Astros ace Justin Verlander had an amusing analogy for the ball’s texture:

“The World Series ball is slicker. No doubt. I’m telling you, we’re in here signing [World Series] balls before the game, and it’s hard to get the ink on the ball sometimes. You know when you sign a receipt at Starbucks, and if you don’t hold the paper down with your hand, the pen just slides across the paper and the ink doesn’t stick to it? That’s what it’s like sometimes trying to sign these balls. That’s how slick the leather is.

“It’s different. I noticed it especially throwing a slider. It didn’t feel the same. The home run I gave up to [Joc] Pederson was a slider.”

According to Morton, teammate Lance McCullers conducted a blind test and could easily tell which ball came from the regular season and which from the World Series.

That is a whole lot of testimonial all backing up the same conclusion: that the baseball is slicker and that the texture is affecting how the games are pitched.

As Verducci points out, the baseball’s allegedly funky texture is most likely to affect sliders, which could help explain why Darvish lasted less than two innings in Game 3 and why Giles has allowed five runs in 1 2/3 innings in two outings. Morton and Alex Wood, who pitched well in Saturday’s Game 4, do not throw sliders.

For what it’s worth, an MLB executive told Verducci that the World Series balls meet the league’s typical specifications, with the only difference coming from a gold World Series insignia stamped on. An anonymous source suggested the way the balls are treated pregame could affect the texture.

Whatever the reason for the slicker balls, MLB probably needs to take action, if not by the end of this series then in the future. Combine this controversy with the ongoing juiced-ball debate, and it is clear the league should get a firmer grip (no pun intended) on the composition of the ball its players use.