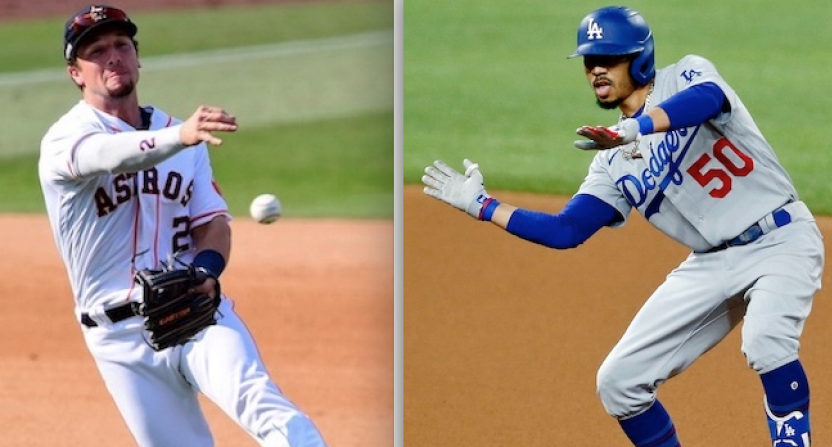 No disrespect intended toward the Atlanta Braves. Nor to the Tampa Bay Rays or New York Yankees, depending on which team wins Game 5 of their ALDS Friday night.

But with the Houston Astros and Los Angeles Dodgers both one championship series victory away from the World Series, let’s just see the matchup that would be the most compelling. Give us the Revenge Match that’s been brewing since the Astros’ sign-stealing scandal was uncovered and their 2017 World Series win over the Dodgers forever stained.

An Astros-Dodgers clash is the best way for this 2020 Major League Baseball season to end.

Regardless of whether you believe MLB commissioner Rob Manfred penalized Houston appropriately for the cheating that helped them win a World Series title, the Astros were generally spared facing the wrath of fans and media with COVID-19 restrictions keeping fans out of ballparks this year. (Spring training, taking place before the world changed, was an exception.)

So at the very least, those players should have to face the team from whom they possibly stole a World Series title. There was some comeuppance when the Astros and Dodgers played each other in the regular season, a matchup determined with the shortened season’s format of teams paired up by geographic region (AL West vs. NL West, etc.).

Simmering tensions were finally released when Dodgers reliever Joe Kelly threw at Astros batters Alex Bregman and Carlos Correa. It was a retaliation three years in the making. Kelly mocked Bregman with a yawn and his pouty-face directed at Correa became one of the signature images of the 2020 season.

Kelly’s taunt spoke for many in baseball (fans included) who took no pity on the Astros for whatever bad karma came their way. (However, it could’ve been done without Kelly throwing at opposing batters’ heads. Take out some frustration, mete out punishment. But don’t deliberately flirt with causing serious injury.)

Taking away Houston’s first- and second-round picks in 2020 and 2021, along with a $5 million fine, wasn’t enough. Manager A.J. Hinch and general manager Jeff Luhnow were suspended and lost their jobs, but no players who participated (“allegedly,” as Desus & Mero might say) in the sign-stealing were penalized. And it felt particularly galling for the Astros to qualify for the postseason with a 29-31 record, thanks to an expanded format that allowed all second-place teams in the field.

There’s really only one way remaining to punish the Astros, one way for the Dodgers to get revenge. The Dodgers have to beat them in the World Series.

No, it won’t revise the results of the 2017 season. We’ll never know if Los Angeles would’ve defeated Houston had the circumstances been fair. Those flags still get to fly at Minute Maid Park. That trophy will still reside in the Astros’ offices. The Dodgers getting back at the Astros by winning in 2020 would surely take away some of that sting, though.

The Braves might have something to say about a potential Astros-Dodgers rematch, of course.

Atlanta’s pitching has been outstanding in postseason sweeps over the Cincinnati Reds and Miami Marlins, allowing a total of 12 runs in five games. Whether that success continues against a powerhouse Dodgers lineup in the NLCS might determine the outcome. Though Los Angeles has some bullpen concerns, namely the decline of Kenley Jansen, that the Braves could exploit.

Either the Yankees or Rays could block the Astros from the World Series too. Tampa Bay finished with the second-best record in MLB behind the Dodgers, finishing seven games ahead of the Yankees in the AL East. Yet they’re perenially overlooked due to their lack of star power.

And the Yankees looked like the best team in the AL coming into the season. No, their starting pitching shouldn’t be good enough to win it all. But Gerrit Cole is the kind of ace who could carry a team to a title. If Cole proves he can pitch well on short rest in Friday’s ALDS Game 5, he might be able to overcome the Yankees’ pitching shortcomings by himself. And wouldn’t it be a hell of a thing to see Cole pitch against the Astros, whom he almost lifted to a World Series championship last season?

Each of those other teams and their inherent storylines definitely hold some appeal. The Braves and Rays would add some freshness to the Fall Classic. The Yankees are the biggest, most familiar draw. (And a Yankees-Dodgers series would feel like a clash of the big-market titans.)

With a losing regular-season record, the Astros really shouldn’t be playing in October. Yet maybe they’re here for a reason. Maybe this is baseball justice putting some weight on the scale. This bizarre 2020 season, one unlike any other before it, needs a good ending. The Astros facing the Dodgers can provide that.