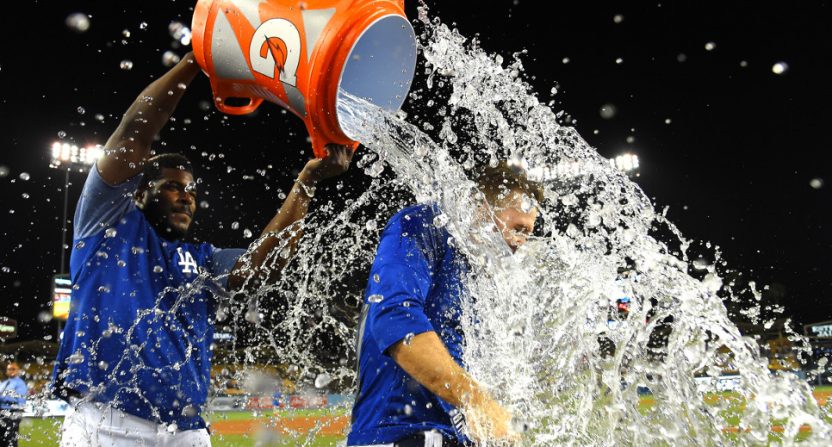 A key NL West series this week saw the San Francisco Giants win games Monday and Tuesday against the Los Angeles Dodgers, pulling within three wins of them and getting closer to wild-card contention. The Dodgers, in a battle for a wild-card spot themselves and a couple games back of the Arizona Diamondbacks, looked set to avoid the sweep Wednesday after scoring in the sixth and adding two further runs in the seventh to take a 3-0 lead into the eighth, but then they were almost undone again by their bullpen, which has been a regular culprit in many of their recent losses. The Giants got a three-run homer by Andrew McCutchen to tie the score in the eighth and eventually pushed the game to 12 innings, before the Dodgers won there on a double from Yasmani Grandal, a single from Max Muncy and a sacrifice fly from Brian Dozier, making the final score 4-3.

That’s a crucial win for the Dodgers, improving their record to 65-57 and putting them 1.5 games back of the division-leading Diamondbacks and tied with the Colorado Rockies (but third in the division thanks to playing more games so far). But it isn’t exactly going to alleviate the concerns about their bullpen. Starter Hyun-Jin Ryu made his first start since suffering a significant groin injury May 2, and he threw six shutout innings on just 89 pitches, but things didn’t go so well once the relievers took over. J.T. Chargois pitched a 1-2-3 seventh, but Caleb Ferguson allowed a single and a walk to start the eighth, then notched a strikeout, but then gave up the three-run shot to McCutchen:

As Eric Stephen noted on Twitter, this is just the latest part of a disastrous stretch for the bullpen:

To sum up the Dodgers' bullpen in the last 7 days:

That’s quite the run, with just about every L.A. reliever responsible for giving up the lead at some point. And even with the Dodgers winning two of those games, that’s still sparking a lot of concern in fans, and justifiably so. Of course, that’s not the only part of what’s gone on in these games, and even this one could have been very different if not for a few particular things that happened while the Dodgers were on offense, especially Gorkys Hernandez gunning down Dozier’s attempt to score on a Matt Kemp single in the fifth:

But it’s the bullpen that has many following the Dodgers worried. And while it didn’t wind up costing them this game, it’s certainly going to be a concern for the stretch run.