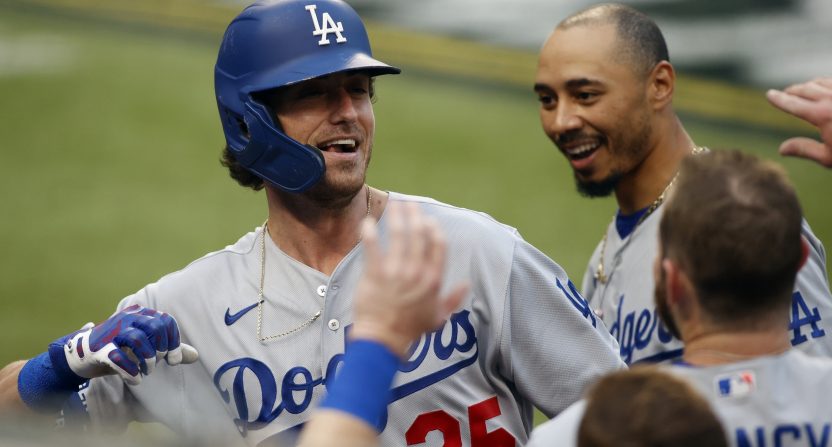 If the Los Angeles Dodgers were saving all of their offense to break out in Game 3 of the NLCS, that was an intriguing strategy. But a lineup that scored the most runs in MLB during the regular season did indeed explode Wednesday, burying the Atlanta Braves early and mercilessly in a 15-3 blowout.

And now, this NLCS may be a competitive matchup after all.

Los Angeles jumped on Atlanta starter Kyle Wright right away with a Mookie Betts leadoff single and RBI double from Corey Seager. After getting two consecutive groundouts, Wright looked as if he might escape the inning with only one run allowed. But that third out was terribly elusive and Wright throwing six scoreless innings in his NLDS start quickly became a distant memory.

The next nine Dodgers batters reached base, an onslaught that included back-to-back homers by Joc Pederson and Edwin Rios, three walks, hitting Justin Turner with a pitch, and a grand slam from Max Muncy.

So the Dodgers were saving all of their offense for Game 3 (and the 9th inning of Game 2). Interesting strategy 🤔 pic.twitter.com/5K1AWLMeXo

Once the smoke cleared, the Dodgers racked up 11 runs — a new MLB postseason record for a single inning — with seven hits and had officially revived what appeared to be bleak postseason chances just 48 hours earlier.

Immediately following Game 2, the prevailing narrative was that the Dodgers’ offense had finally come alive with four runs in the ninth inning and poised to put up a fight in the NLCS. (At least one reporter acted as if the Braves had lost the game afterward.) That may have been wishful thinking from those hoping to see a competitive series, but Los Angeles built on its late-game breakout and erupted approximately 20 hours later.

Enjoying an incredible amount of run support, Dodgers starter Julio Urias continued his strong postseason. In five innings, he allowed one run and three hits. Even demoted closer Kenley Jansen got some work in, throwing a scoreless sixth inning.

The Dodgers have a chance to even up the NLCS Thursday with Game 4 scheduled for 8:08 p.m. ET on Fox. Clayton Kershaw will presumably start for the Dodgers after being scratched from Game 2 due to back spasms. However, the team hasn’t officially announced that yet. If Kershaw can’t go, manager Dave Roberts said Dustin May will likely start.

Rookie Bryse Wilson gets the nod for Atlanta, making his first appearance of the postseason. During the regular season, he compiled a 4.02 ERA with 15 strikeouts and nine walks in 15 2/3 innings. Wilson last pitched on Sept. 27.