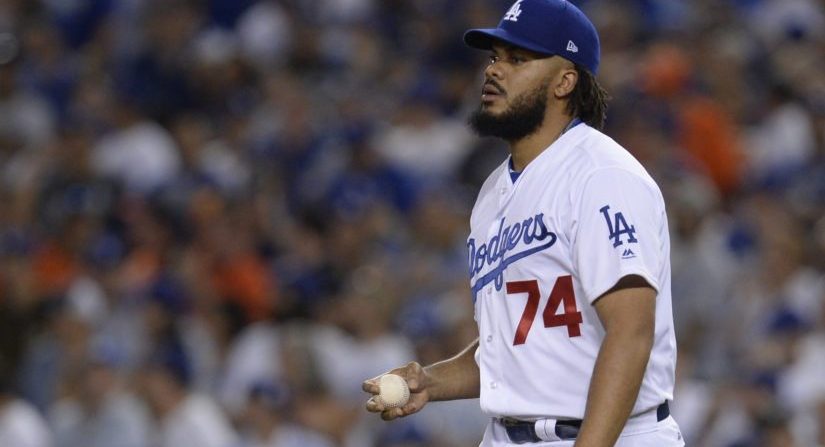 Los Angeles Dodgers closer Kenley Jansen plays for one of the few National League teams that actually give a shit about winning in 2018. In an interview with Jon Heyman of FanRag Sports, Jansen said that he thinks only six National League teams are trying this season (which may or may not be true), and while he doesn’t specifically name the teams, he breaks down the divisions in a way where it’s obvious who he’s talking about.

Specifically, Jansen says he believes three teams are trying in the NL West, two in the NL Central and only one in the NL East.

“There’s one team competing for the title in the NL East!” Jansen says, incredulously

I have to question Jansen’s math here. By his logic, one of the Nationals and Mets in the NL East isn’t trying this season, despite the Mets signing free agents Jay Bruce, Todd Frazier, and Jason Vargas and the Nationals coming off of a 97 win 2017 and not needing to screw with that team all that much. Are the Nationals not trying because their only significant signings this winter have been Matt Adams and Brandon Kintzler, or are the Mets not trying because they sucked last year and didn’t try to drastically improve?

In the NL Central, things are also fuzzy. The Brewers are clearly “trying” after signing Lorenzo Cain and acquiring Christian Yelich from the Marlins. Sure, the Cubs didn’t re-sign Jake Arrieta, but they did spend a decent chunk of change to replace him in the rotation with Yu Darvish while also signing Tyler Chatwood, Drew Smyly, and Jansen’s former Dodger teammate, Brandon Morrow. I guess that means the Cardinals aren’t trying, probably because of their refusal to re-sign Lance Lynn, but they still traded for Marcell Ozuna and inked Luke Gregerson.

Ironically, Jansen’s team had arguably the quietest offseason in the NL West as they looked to stay under the luxury tax threshold. The Dodgers dumped a bunch of salary onto the Braves for Matt Kemp (and tried to dump Kemp onto another team to no avail) in December…and did a whole bunch of nothing else, despite losing Darvish, Morrow, and Tony Watson. The Giants added a bundh of veterans, including Evan Longoria, Andrew McCutchen, and Watson, in an attempt to improve in 2018. The Diamondbacks lost JD Martinez to the Red Sox in free agency, but did add Alex Avila, Brad Boxberger, and Steven Souza. The Padres gave Eric Hosmer a truckload of money jut for the hell of it. The Rockies splurged on Wade Davis, Chris Iannetta, and Brian Shaw while losing Chatwood, Carlos Gonzalez, Greg Holland, Jonathan Lucroy, and Mark Reynolds.

I get what Jansen is going for with his comments. But maybe he should have aimed at the American League, which had just five teams finish above .500 last year (compared to seven for the NL) and saw much of its middle class take a step back this offseason, while the NL’s middle class mostly took a step forward (except for the Marlins and Pirates. Poor, poor Miami and Pittsburgh).

Jansen also pointed out that many of the free agents still on the market could help teams win championships, but fit is clearly important here. How many teams that will be contending in 2018 really need a top ten third baseman like Mike Moustakas on their roster on what would have been initially projected as a nine figure contract?

“There are at least ten guys out there who can help you win a championship, and they’re not in the game,” Jansen said. “Obviously, something’s going on. We all know what’s going on in baseball. Every year there’s tanking. It’s obvious. They just made it more obvious this year.”

While Jansen does have some valid points, I think my overwhelming takeaway this offseason is that MLB’s free agency structure has always been geared towards paying players for past, rather than future, production. And when teams see themselves get burned by nine-figure deals given to players like Jacoby Ellsbury, Ryan Howard, and Albert Pujols, they’re pausing at handing out huge deals like that to free agents, resulting in the situation we’re in right now.

It’s pretty clear that something major will change in the next CBA. But what that change is will be anyone’s best guess, and it’s doubtful that MLB will accept the union’s proposals without a fight.