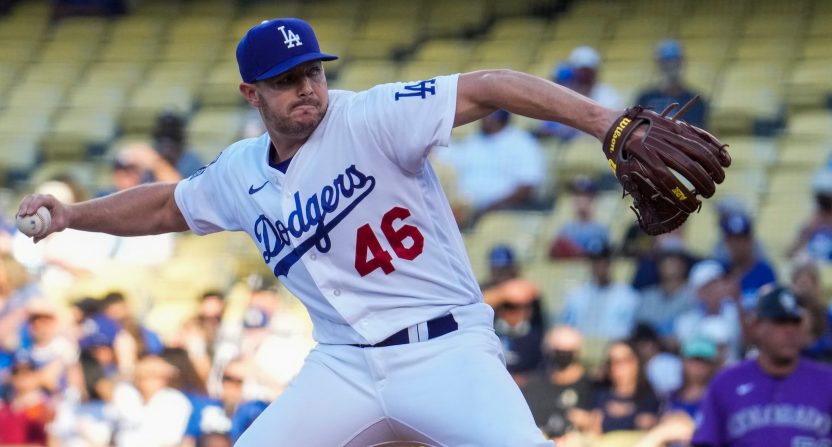 Thursday night, the San Francisco Giants and Los Angeles Dodgers will play for the final time in 2021, with the winner advancing to the NLCS. It’s the ultimate culmination of a season in which the two teams battled all year long to not only have the best record in baseball but determine the winner of the NL West.

The Giants won out, finishing with an MLB-best 107-55 record, earning them the right to host the series. Meanwhile, the 106-56 Dodgers were forced to play in the Wild Card game, beating the St. Louis Cardinals in thrilling fashion. Their reward was to take on the Giants in the NLDS.

With the season on the line, the Giants are sending Logan Webb to the mound to start Game 5. That makes sense given that Webb is 11-3 with a 3.03 ERA on the year. He also pitched the Giants to victory in Game 1 of the series in a strong performance.

Meanwhile, instead of trotting out presumed starter Julio Urías, who is 20-3 on the season, the Dodgers are going to give reliever Corey Knebel the nod to begin the night.

The move is meant to account for the fact that the Giants put a righty-heavy lineup up against Urias in Game 2 and manager Dave Roberts wants to try to maneuver against that.

Whoa! The #Dodgers@announce that reliever Corey Knebel will start tonight instead of 20-game winner Julio Urias

Roberts is certainly putting his reputation on the line with this decision, especially given that Knebel, who did make four starts this season but never lasted longer than two innings. The plan reportedly calls for 20-game winner Urías to enter the game relatively quickly in relief and take on the bulk of the innings. This isn’t new for him either as Urías pitched the last three innings of Game 7 of the 2020 NLCS.

As you might imagine, there are a lot of strong thoughts on social media about the move and whether or not it will pay off.

I like this gambit from the Dodgers. It prevents SF from stacking the top of the lineup with the RHH platoon dudes. Corey Knebel can steal three outs and shorten the game. And Julio Urias is measured enough that it is unlikely to mess with his rhythm.

Hey, man, if Dodgers want to put the most important game ball in 130+ years of a rivalry into the shaky, unproven hand of Corey Knebel, good by me.

As for Urias, who will now pitch out of his routine this year, ask yourself, kid: Would they have done this to Fernando? 🤷🏻‍♂️ https://t.co/Z5vXOYTisM

Before everyone jumps off a bridge, Corey Knebel is probably an opener for Julio Urías. It does make sense to use a right handed opener when a lefty is coming in next to force bad matchups for the Giants, who have a lot of platoon hitters.

With those splits it’s probably worth it to stick to the right handed heavy lineup for Kapler. #ResilientSF

While he’s starting, the odds are pretty good that Knebel will be out of the game within one or two innings. It’s a fascinating move at the most critical moment of the season. Will it pay off for the Dodgers or doom them? We’ll find out tonight when the Giants and Dodgers play at 9:07 p.m. EST in San Francisco.