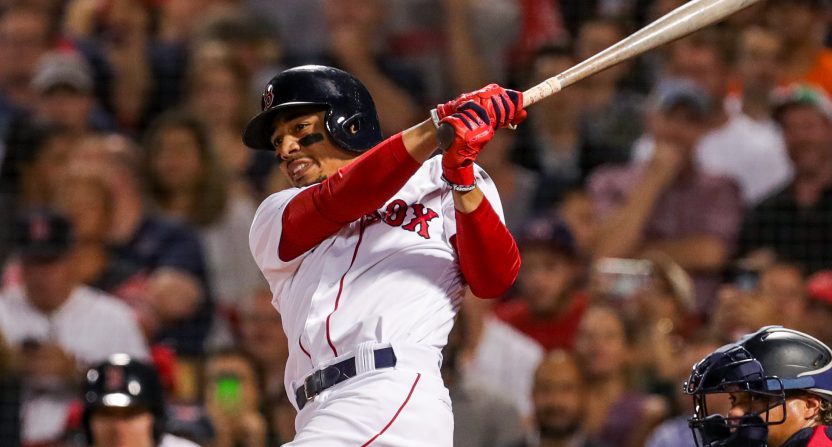 The Los Angeles Dodgers have added arguably the second-best player in baseball to a team that won 106 games in 2019.

According to several outlets, the Dodgers acquired outfielder Mookie Betts from the Boston Red Sox in a three-team that also reportedly includes the Minnesota Twins. Starting pitcher David Price will also go from Boston to the Dodgers in the trade, while starting pitcher Kenta Maeda will go to the Twins. The main pieces going to the Red Sox in the deal appear to be outfielder Alex Verdugo — who will enter his third MLB season — and pitching prospect Brusdar Graterol.

BREAKING: The Los Angeles Dodgers have agreed to a deal with the Boston Red Sox that would send star outfielder Mookie Betts and starter David Price to the Dodgers, sources familiar with the deal tell ESPN. Deal is pending medical reviews.

Starter Kenta Maeda would go to the Minnesota Twins part of the Mookie Betts-David Price deal, sources tell ESPN. Outfielder Alex Verdugo and hard-throwing pitching prospect Brusdar Graterol, who has been with Minnesota, would go to the Red Sox, as @Ken_Rosenthal said.

Significant cash would go from #RedSox to #Dodgers in Betts-Price deal as well. Betts owed $27M in 2020, Price $96M over next three years.

Too many people to credit, but it looks like this is the deal:

RHP Brusdar Graterol is the other prospect heading to the Red Sox in the deal, per @Ken_Rosenthal. Graterol throws a triple-digits sinker – doesn't miss as many bats as one might expect from the velo, but a rare arm.

Additionally, the Dodgers are sending outfielder Joc Pederson to the Angels for infielder Luis Rengifo.

Joc Pederson would go from #Dodgers to #Angels if blockbuster is completed, source tells The Athletic.

Infielder Luis Rengifo is headed to the Los Angeles Dodgers in a deal for outfielder Joc Pederson, sources tell ESPN.

There’s a ton going on here. But far and away the biggest thing is that the Red Sox are giving up *Mookie Betts* in a contention window.

Yes, the New York Yankees were quite likely to win the AL East in 2020, but this was a Red Sox team at least shaping up in the 90-win area on paper with Betts- and that would be a team in contention. And this is a superstar 27-year-old player that was better than Mike Trout by WAR in 2018, according to both Baseball Reference and FanGraphs (Betts’ WAR in 2018 topped any season Trout has had).

Even if we eliminate 2020 and think long term, the Red Sox should’ve been doing everything possible to pay what it takes to keep Betts. He’s adding 5-10 wins to a team while taking up just one roster spot, and with his age and skillset (both a top-tier offensive and defensive player), should be an elite player for a long, long time. He’s worth the $350+ million he’ll likely get from some team next offseason, and he was right to be demanding such money in an extension from the Red Sox.

Boston does get a good young center fielder in Verdugo, who turns 24 in May and was worth 3.1 WAR per Baseball Reference in 2020. And Graterol is an intriguing arm. But on a team that should be trying to win right now, this isn’t exactly a return worth celebrating in a trade for a proven, still-young superstar. For Boston, this was a financial decision, and one that shouldn’t be viewed as acceptable by their fans.

That the Boston Effing Red Sox are crying poor and trading away the best player they’be developed in ages for financial reasons is an absolute embarrassment. And it’s an insult to Red Sox fans.

Insta-take: Sox fans should be v. mad. I still believe Betts was going FA no matter what was offered but even so, it's going to be ugly in MA. Verdugo/Graterol pretty good at least.

LAD fans ought to be doing somersaults.

MIN gets a super underrated SP they desperately needed.

For the Dodgers, meanwhile, this is the kind of move that should thrill their fanbase and have the clubhouse feeling extremely confident entering the season. And the organization seems intent on trying to keep Betts beyond 2020.

Dodgers will try to keep Mookie Betts longterm. Talks may not start immediately but they hope this isn’t a one-year thing. They love Mookie, who was unable to come to a multiyear agreement with Boston despite its many tries.

The Dodgers’ lineup is now video game-esque, and the order can go in countless ways; just line these hitters up however you’d like, and you’ll score a ton of runs.

Adding Betts to a 106-win team — and a team that has won at least 92 games in seven straight seasons — has to terrify the rest of the National League- and particularly the NL West, of course. The Dodgers are far and away the team to beat in the NL right now, and they were able to make this trade without giving up stud prospects Gavin Lux and Dustin May. They have the organizational depth to easily afford to give up what they did in this trade, especially for a player that could put their team over the top.

This is exactly the kind of trade you make in the Dodgers’ position, and will give them a big boost in their hopes to end a 32-year title drought.

UPDATE: Several days later, it appears that the Dodgers, Red Sox, and Twins have figured out a way to agree to a trade. Well, multiple trades, technically.

Minnesota prospect Brusdar Graterol’s medical records held up the three-way trade, and on Sunday, the Red Sox and Dodgers agreed to include highly regarded middle infield prospect Jeter Downs in the trade to replace Graterol. Catching prospect Connor Wong also goes from the Dodgers to the Red Sox.

And Graterol is instead going from the Twins to the Dodgers for Kenta Maeda.

More as the details keep flowing in:

BREAKING: The trade that will send Mookie Betts to the Los Angeles Dodgers has been agreed upon, sources tell ESPN. Outfielder Alex Verdugo and shortstop Jeter Downs are among those who will go to the Boston Red Sox.

Catching prospect Connor Wong is headed to the Boston Red Sox alongside outfielder Alex Verdugo and shortstop Jeter Downs in the trade that will send outfielder Mookie Betts, starter David Price and cash to the Los Angeles Dodgers, sources tell ESPN. Players have been notified.

Deals coming together. #Dodgers in agreement with #MNTwins, pending medical review – Maeda and cash would go to MIN for Graterol and another prospect. Other elements perhaps. Meanwhile, per @JeffPassan, LAD and #RedSox in agreement on Betts and Price for Verdugo-Jeter Downs-plus.

#MNTwins also getting low-level minor leaguer from #Dodgers in addition to Maeda and $10M, source says.

Naturally, the “Jeter to the Red Sox” jokes have already been out in full force.

UPDATE II: The Dodgers-Angels deal that would’ve sent Joc Pederson and Ross Stripling to the Angels, and Luis Rengifo to the Dodgers, is apparently off.

I can confirm that the Dodgers-Angels deal that would have sent Joc Pederson and Ross Stripling to the Angels for Luis Rengifo, and others, is off, as multiple outlets have reported. It sounds as if the Dodgers no longer deemed it necessary, though I'm not sure why.