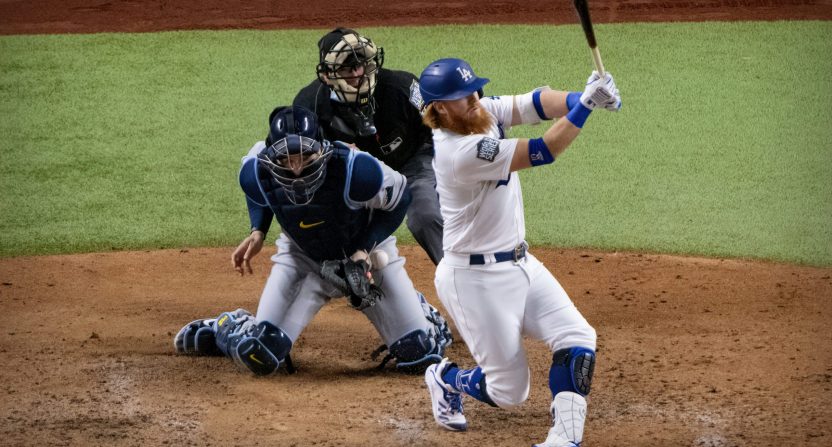 The Los Angeles Dodgers won their first World Series title in 32 years with a 3-1 victory over the Tampa Bay Rays in Game 6 on Tuesday night. But minutes after the victory, there was breaking news on Fox during the Dodgers’ celebrating that third baseman Justin Turner was removed from Game 6 due to a positive COVID-19 test.

Fox announces that Justin Turner left Game 6 of the World Series due to testing positive for COVID-19. pic.twitter.com/pXyjLV9suY

Turner was taken out of the game in the top of the eighth inning, after going 0-for-3 with two strikeouts. He’s the first MLB player to test positive for COVID-19 in six weeks.

Justin Turner was the first player to test positive for Covid-19 test in six weeks,.

The timing of the COVID-19 test return is bizarre, and it’s fair to wonder if anybody else will test positive. And who knows what it would’ve meant for the scheduling of Game 7 of the World Series had the Dodgers not won.

In the second inning tonight, the lab doing COVID tests informed MLB that Justin Turner’s test from yesterday came back inconclusive. The samples from today had just arrived and were run. It showed up positive. The league immediately called the Dodgers and said to pull Turner.

When the Dodgers return to their hotel tonight, everybody will be given a rapid PCR test. On the field right now, as they celebrate, the Dodgers are wearing masks. Unclear as to whether they’ll stay in Dallas area before traveling back to Los Angeles. Situation fluid right now.

Update II: Turner tweeted that he feels “great” with “no symptoms at all.”

Thanks to everyone reaching out! I feel great, no symptoms at all. Just experienced every emotion you can possibly imagine. Can’t believe I couldn’t be out there to celebrate with my guys! So proud of this team & unbelievably happy for the City of LA#WorldSeriesChamps

Update III: Turner joined the Dodgers on the field for a team photo, and even took off his mask. So, we’re left with more questions than answers.

Justin Turner returns to the field for the team picture. pic.twitter.com/NmXBbU7Mo7

Update IV: Fox Sports’ Ken Rosenthal reports that Turner tested positive twice, and there was not a a false positive. The results from Monday’s test came back positive on Tuesday, and a test from Tuesday afternoon also came back positive. Turner was asked not to go onto the field, but he and the Dodgers “insisted upon it.”

According to Ken Rosenthal, Justin Turner tested positive for yesterday's test, had a second positive test this evening and was also told not to go on the field and did anyway. pic.twitter.com/Xm1QjzW95X

. @Ken_Rosenthal: “He tested positive yesterday. They got those positive results back this afternoon. Ran a test today, came back positive again. This is NOT a case of a false positive… he was asked not to go on the field. He insisted upon it, the Dodgers insisted upon it.” pic.twitter.com/GG7PTbluuo

Update V: Rosenthal issued a correction on his report, saying that the first test result came back in the second inning on Tuesday night, not in the afternoon.

One correction to what I said on @FS1 about Turner timeline. First result, on the test from yesterday, came back in the second inning, not in the afternoon. His test from earlier today was then expedited, and when it came back positive, he was removed from the game.