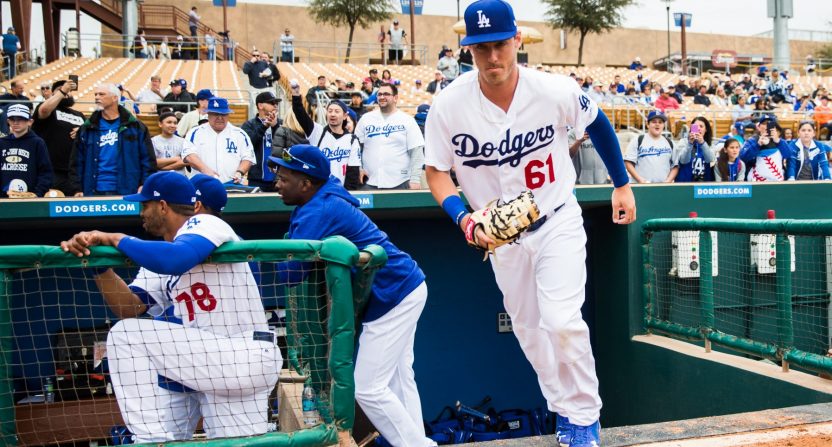 The Los Angeles Dodgers were going to be interesting no matter what in 2017. Winners of the National League West each of the last four years, the question coming into the season was (and still is) whether or not the team can finally break through and win at World Series.

Things got more interesting Tuesday with the team’s promotion of top prospect Cody Bellinger from Triple-A Oklahoma City. Bellinger figured to find himself in the majors at some point this season, but few were expecting it to be this early.

An injury to outfielder Joc Pederson combined with a general lack of production from the outfield to begin the season led to the promotion of Bellinger after just 18 games in the Pacific Coast League. The 21-year-old posted a 1.056 OPS with OKC and is widely regarded as one of the game’s top 10 prospects.

This isn’t just another case of “Team A calls up big-time prospect.” This is the Dodgers once again churning out top-tier talent from within while still spending like crazy on the Major League side. The latter part of that equation gets a lot of attention, but one could argue that it’s the farm system that has allowed the team to be so successful of late. Sure, the team has spent a lot on guys like Justin Turner and Rich Hill. But the core of today’s Dodgers—Kershaw, Jansen, Seager, Pederson—was developed by the organization.

The Dodgers are Exhibit A in how to build a franchise in today’s MLB. You can’t just spend like crazy on free agents and expect to win. It’s too expensive (even for Los Angeles) and most players don’t hit free agency until the back end of their prime. Without prospects that can either make up much of the Major-League roster or be used as trade bait, it’s almost impossible to compete.

There are few teams better at this than the Dodgers. Even while picking at the end of the first round, they manage to find players who consistently exceed expectations. Corey Seager was a first-rounder, but 17 players were picked prior to him four years before he was named National League Rookie of the Year. They signed Julio Urias at the age of 16 as a relatively unheralded international prospect out of Mexico.

And now it’s Cody Bellinger. He was always a prospect, but few saw him as what he is now when he was drafted. The Dodgers took him in the fourth round in 2013 as a lanky, 17-year-old out of high school. After his first pro season, Baseball America described him as a “line-drive hitter with gap power” that had the potential to “develop average or better power.” It’s incredibly difficult to project on a player as young as Bellinger at the time, but it’s clear that he managed to significantly surpass those initial reports.

After hitting just four homers in his first two professional seasons, Bellinger mashed 30 in 2015 while leading High-A Rancho Cucamonga to a California League title. That was at 19 after skipping a level. He followed that up with 26 bombs in the upper minors last year, placing him among the top 10 prospects in baseball no matter what list you looked at.

We haven’t even touched on the defense, which scouts have been gushing about for years. He figures to be among the best first basemen in the game when he does take over for Adrian Gonzalez. Until then, the Dodgers will utilize his athleticism by playing him in the outfield to keep him in the lineup.

From gangly high schooler with potential to consensus top prospect, Cody Bellinger’s story is that of the Dodgers. The team certainly hoped he could become a productive major leaguer or they wouldn’t have taken him in the fourth round. But few if any saw him as the eventual heir apparent to Adrian Gonzalez.

Gonzalez fits into this story perfectly. The ownership group that saved the team from Frank and Jamie McCourt constantly gets headlines for leading the league in payroll. Very soon after the new group took over, the Dodgers assumed all kinds of salary obligations in the blockbuster that netted Gonzalez (along with Carl Crawford, Josh Beckett and Nick Punto) from the Red Sox. That helped the team compete in the short-term.

But the team also made a plethora of moves to be competitive in the long-term, because taking on contracts like that while trading away prospects isn’t feasible on a regular basis.

After the Dodgers pried Andrew Friedman away from the Rays, one of Friedman’s first moves was to hire then FOX TV analyst and former player Gabe Kapler as the organization’s Director of Player Development.

It was a bold move. Kapler hadn’t served in a front office capacity before. He was a “healthy lifestyle guru” who espoused the value of sabermetrics in his time on television. Unsurprisingly, he took a holistic approach to player development. The Dodgers were at the forefront in providing organic foods throughout the system for minor leaguers. Kapler extols the virtues of napping.

I’m not suggesting that better food and naps magically turn players into mega-prospects, but the focus on the farm has certainly helped. Going into 2012, the Dodgers minor-league system was ranked 23rd out of 30 by Baseball America. The last three years, the system has been ranked among the top five in the game. That’s while winning at the Major League level and not selling off top talent for prospects.

This isn’t unique nowadays. Elite farm systems aren’t just for small-market teams anymore. The Yankees sold off a number of pieces last year and now have one of the top pipelines in the game. The Cubs rode players that comprised the best system in baseball heading into 2015 to a World Series for the first time in 108 years.

For the Dodgers, it has been a balancing act. The team has not torn down its Major-League roster in order to acquire prospects. They’ve been in the playoffs each of the last four seasons. The only way they can consistently compete while maintaining one of the best stables of prospects in baseball is with guys like Cody Bellinger. The Dodgers manage to get as much out of prospects as any team in baseball.