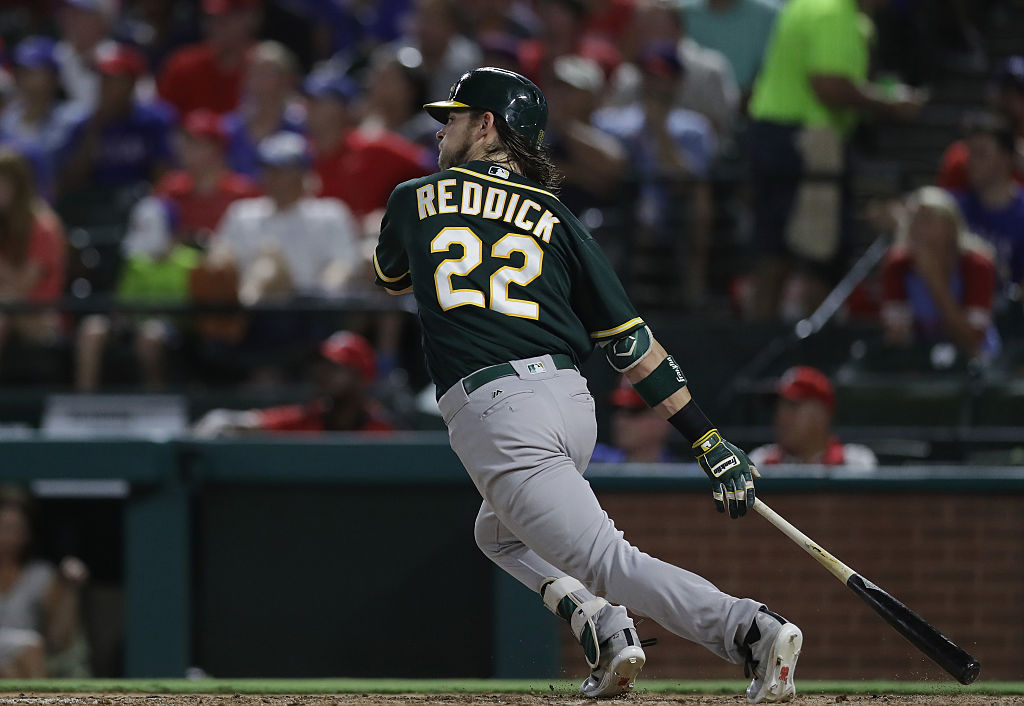 Shortly after news broke that the Mets won the Jay Bruce sweepstakes, the second major domino of the MLB trade deadline has fallen, courtesy of the Los Angeles Dodgers and the Oakland Athletics.

Many MLB insiders pegged the Dodgers to be one of the most active teams on the August 1 deadline, and so far that sentiment is holding true. Thanks to their recent winning surge in the absence of Clayton Kershaw, the front office is in “win-now” mode and it shows with this deal.

Hill is the real prize in this deal for the Dodgers. His story is really one of the most unique in all of baseball, and he has been one of the MLB’s most underrated players in 2016, thanks in part to being trapped on a hapless Oakland squad. Ever since his late season call up with the Red Sox in 2015, the 36 year old has pitched like a Cy Young candidate when he’s been healthy. So far in 2016, he has a 9-3 record to go with a sterling 2.25 ERA and 90 strikeouts in 76 innings.

However, his struggle to stay healthy this season is a real concern. Hill hit the disabled list in June after suffering a groin injury, causing him to miss the entire month. He returned for two starts in July, both excellent outings, but he left his first start after the All-Star break after just five pitches due to a blister. The blister has continued to nag him, and he is currently on the disabled list, retroactive to July 20, as he recovers from it. That said, he is expected to be ready to start sometime this week.

It seems curious the Dodgers would choose to add yet another injury-plagued starter to their roster — starters Kershaw, Brett Anderson, Alex Wood, and Hyun-Jin Ryu are all currently on the DL — but Hill’s talent is undeniable and the front office has to be thinking its injury luck will change at some point this season.

Reddick may be the secondary piece for the Dodgers in this deal, but he is still a significant addition. The team has been searching for another left-handed bat to add to its lineup and he represents a solid source of power for the middle of the lineup. Reddick is slashing a crisp .296/.368/.449 this season to go along with eight homers and five stolen bases. Still, he is a massive liability against left-handers (.172 BA in 2016), and will likely be forced to sit on days with lefty starters on the mound for opposing teams.

The biggest takeaway from Reddick’s inclusion on this deal is more about what it signifies for Yasiel Puig’s future. Trade rumors have been swirling around the struggling outfielder all season, but the Dodgers have remained ardent that they would need an outfield replacement for him if they were to send him away. And as many have already pointed out, Reddick is that replacement.

Addition of Reddick for the Dodgers gives FO a better position from which to trade Yasiel Puig. White Sox want him in any LAD deal.

The Dodgers could elect to keep Puig, but this deal lays the groundwork for a massive follow-up blockbuster for one of the rumored aces on the market, either the White Sox Chris Sale or the Rays Chris Archer. However, the Dodgers’ ability to put together a deal for one those pitchers did take a hit with this trade. In order to acquire Hill and Reddick, Los Angeles paid a steep price in pitching prospects.

Frankie Montas (5), Grant Holmes (4), and Jharel Cotton (10) were all ranked as Top-10 prospects in the Dodgers’ system heading in to 2016 by Baseball Prospectus. Holmes (No. 72) was also ranked as a Top-100 prospect before the season by Baseball America. The Dodgers had a mighty farm system before this trade, and still have one of the deepest systems after it, but this trade does thin them out a bit.

Talking to scouts: Grant Holmes probably has the best chance to remain a starter. Cotton/Montas probably bound for bullpen.

The A’s got themselves a pretty nice haul here. Especially when you consider virtually any team could have had Hill in free agency during the offseason before he ended up signing with Oakland on a one-year, $6 million flier.

This move should also work wonders for the Dodgers in the short term. If Hill can stay healthy, he shores up a solid rotation in Kershaw’s absence. The deal will look even better if the former MVP returns in time for the stretch run — at which point the Dodgers’ rotation would become one of the most fearsome in baseball. Reddick gives the lineup some much-needed pop, and allows President Andrew Friedman and GM Farhan Zaidi the flexibility to make an even bigger move.

The Dodgers made a big splash with this deal, and chances are this is just the beginning.