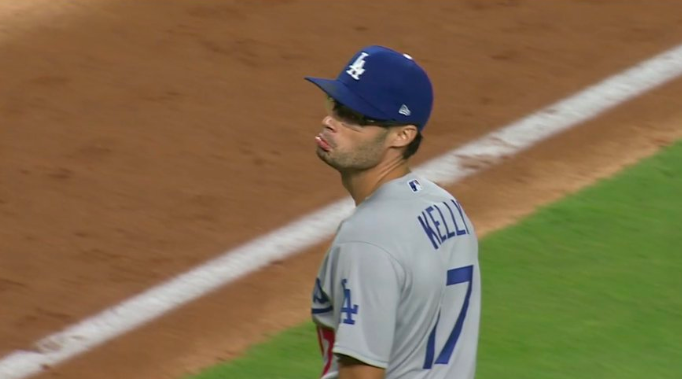 The Houston Astros beat the Los Angeles Dodgers to win the 2017 World Series in seven games, and a league investigation determined over this past offseason that the Astros were electronically stealing signs during the title run. The Astros’ cheating has angered much of the Major League Baseball world, and it’s understandably bothered the Dodgers the most.

Well, the Dodgers and Astros began a two-game series in Houston on Tuesday night, and the Dodgers made it clear that they have not forgotten about the scandal.

In the sixth inning, Dodgers reliever Joe Kelly threw a 3-0, 96 mph fastball behind the head of Houston’s Alex Bregman, and followed it up with a yawn.

Joe Kelly throws behind Bregman then proceeds to yawn like it's nothing pic.twitter.com/SsiNi6yomE

Later in the inning, Kelly just missed hitting Houston’s Carlos Correa in the head with a pitch that sent Correa to the ground.

Carlos Correa has to duck out of the way from an inside breaking ball from Joe Kelly. pic.twitter.com/NabNOVB0Q6

Now, that was a breaking ball, and a pitcher is quite likely to go with a fastball if they want to send a message. So, it’s likely that one just got away from Kelly (and the one to Bregman may have been accidental as well; Kelly may not have wanted to put the leadoff man on base with a three-run lead), but Correa surely wasn’t thinking that way after a pitch nearly took his head off.

Kelly said after the game that he didn’t throw at the Astros on purpose.

Joe Kelly said he did not throw at the Astros on purpose. "My accuracy isn’t the best,” he said, referencing the window he broke at his home.

Well, Kelly eventually struck out Correa, and the two exchanged words… and Kelly made a funny face mocking Correa.

A closer look at Joe Kelly's reaction after he struck out Carlos Correa. Benches cleared shortly after. pic.twitter.com/cDcSVoS0Hz

Naturally, that all led to the benches clearing.

Kelly and Corra exchanged words after Correa struck out to end the inning. Then the benches cleared. pic.twitter.com/tpSYuRC0Hg

Kelly wasn’t even on the Dodgers in 2017; he was on the Boston Red Sox, who also lost to the Astros in the 2017 postseason (Houston beat Boston 3-1 in the ALDS).

Don’t forget that Joe Kelly pitched for Boston in 2017. The Astros beat the Red Sox in the ALDS after two lopsided games in Houston. He hasn’t forgotten, apparently. This outing shows one reason why Kelly was loved in Boston #Dodgers. #JoeKellyFightClub

As for the actual game, the Dodgers came away with a 5-2 victory. Both teams are 3-2 in the early going.