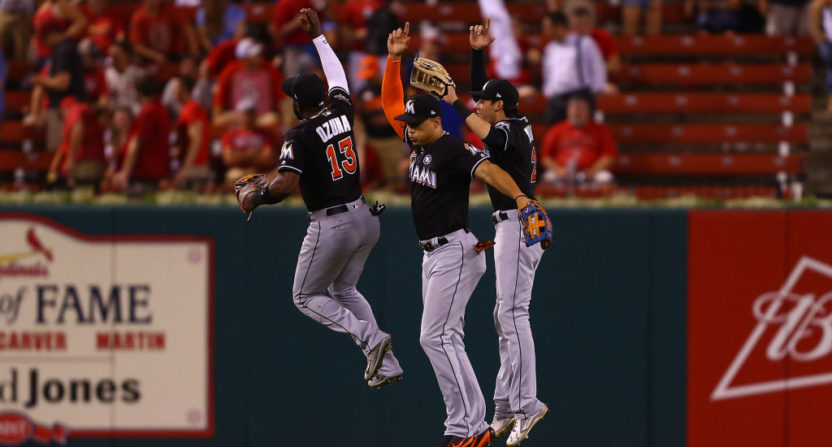 Last month, I wrote about the Miami Marlins potentially being big sellers at the trade deadline. Today, the story is a bit different, despite the Marlins sitting at 41-46, good for third place in the NL East, 10.5 games back of the division-leading Washington Nationals (and nine back of the Colorado Rockies for the NL’s second Wild Card).

In advance of this week’s MLB All-Star Game at Marlins Park, Miami GM Michael Hill talked to Jon Heyman of FanRag Sports, and Hill’s comments give the impression that the Marlins won’t be doing much in the way of rebuilding this month.

“We aren’t talking about those guys,” Hill told FanRag Sports.

That actually makes sense. Those three players are all young, cheap, and controllable – Ozuna will be a free agent after 2019, while Realmuto will get there after 2020 (barring an extension) and Yelich could stick around in Miami as long as the 2022 season.

The Marlins also don’t want to trade first baseman Justin Bour, despite the fact that he’s already 29, because he’s cheap.

When asked about coming star Justin Bour, a first baseman who like Stanton will be competing in Monday’s All-Star Home Run Derby, and who had been linked in a report to the Yankees, Hill said that Bour “goes into the same basket” as the other three, meaning no go. “He’s a pre-arb, 20-home run bat,” Hill explained.

Bour, like Realmuto, won’t hit free agency until after the 2020 season. But Realmuto is just 26 – he’s not going to be playing out his arbitration years in his 30s like Bour.

The Marlins *also* don’t want to trade starting pitcher Dan Straily, who is 28, in the midst of a career-year, and has already been traded four times in his career.

Hill said even Dan Straily, who’s been a nice rotation surprise, fits into that same talented and cheap category since he’s a “pre-arb starting pitcher.” So he’s not being shopped, either.

How about Giancarlo Stanton and his massive contract? He has to be on the block, right?

There’s been a lot of speculation among baseball people about the possibility of a Stanton blockbuster with folks going so far as to surmise that the Dodgers would make the most sense, followed by the Cardinals, Red Sox, Yankees and Phillies. Even other Marlins people wonder about it. But there isn’t much to talk about yet.

“We haven’t put his name out there,” Hill said, pointing out that Stanton, who has $295 million to go on his deal after this season, has a complete no-trade, meaning he controls his fate.

I doubt any team would be willing to take on that contract, either, so it’s not exactly if the Marlins would have teams banging down their door for Stanton.

So, who *will* the Marlins trade on top of shortstop Adeiny Hechevarria, sent to the Rays last month?

While the Marlins are talking to several teams about their relievers, with closer A.J. Ramos and set-up man David Phelps believed to be drawing serious interest, their sale may not be quite as thrilling as some predicted, barring a change of heart.

If the Marlins wanted to, they could bring back the same team next season – their only free agents are backup catcher AJ Ellis, and (potentially) fourth outfielder Ichiro Suzuki. But Miami isn’t one piece away, and they have a weak enough farm system where help isn’t on the horizon. This is a team that went into the All-Star Break with a 5.00 rotation ERA, the second-worst mark in the National League (and third-worst in the majors). They’re not going to contend for a playoff spot with a rotation like that.

Even if Wei-Yin Chen somehow gets healthy and pitches like his 2013-14 Orioles self, and both Straily and Edinson Volquez pitch as well as they have with Miami next season, the team still needs another starter or two. It’s not a great situation, and if the team doesn’t sell off *some* pieces before next season, they’re going to be stuck between being a contender and being in rebuild mode – and that’s somewhere no team should want to be.