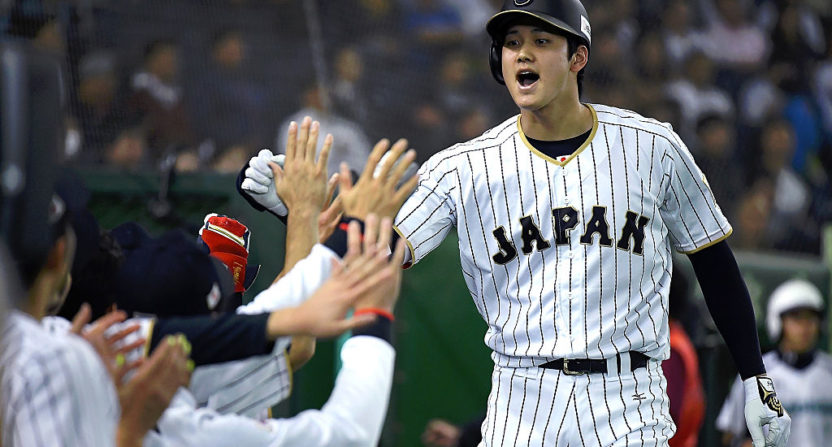 Few stars in baseball history have had as many suitors as Japanese pitching-hitting sensation Shohei Ohtani has right now. Because the collective bargaining agreement drastically limits how much money the 23-year-old Ohtani can make, nearly every team in baseball can dream on its chances of landing the potential ace.

So where should Ohtani go? We asked our writers that very question and got a wide array of responses.

If you were Shohei Ohtani, which team would you sign with?

Matt Clapp:  Putting myself in Ohtani’s shoes, I’d consider it a tie between the Dodgers and Yankees, but the tiebreaker(s) go to the Yankees. That’s because of what New York can offer Ohtani in signing bonus money — $3.25 million; the Dodgers can offer only $300,000 — and the option to let Ohtani DH some games.

If Ohtani is truly insisting on going to a team that will let him serve as a position player on days he isn’t pitching, then it’s hard to see him landing on a National League team. Or, at least not one of the currently-contending NL teams like the Dodgers, Cubs, and Nationals. And, aside from maybe the Giants (location, cultural appeal, and a possible contender again soon), what other NL teams would really appeal to him that much?

The Yankees arrived a year early and are set to be loaded for years to come (and that’s even if they don’t add a Bryce Harper or Manny Machado next offseason). They have the resources (money and a very good farm system) to keep adding. And New York obviously offers the big-market opportunities for Ohtani to potentially cash in off the field, as well as a large Japanese population.

When you add everything up, the Yankees just seem to check the most boxes. But Ohtani is a unique dude and it’s very possible he will value some things that don’t stand out at the moment.

Joe Lucia: This is somewhat of a cop-out, but I would sign with… the Nippon Ham Fighters.

The posting system right now is a sham for world class players like Ohtani, and going to MLB right now limits his future earnings at the tradeoff of… being able to provide more value to teams right now?

The best thing for Ohtani to do is to stay in Japan for two more years and then cash in and get the contract he deserves. Yes, there’s a risk of injury staying in Japan, but there’s also a risk coming to MLB, getting hurt, and eventually having to settle for below-market-value contracts because of questions about his health.

Besides, I think he’d be a lot more happy in Japan for the next two years, and when he eventually would come stateside, he would be a more mature player that would be able to deal with the massive expectations thrust upon his shoulders.

Also, the money. So much more money.

Alex Putterman: Shohei Ohtani is probably a thick-skinned guy capable of withstanding high amounts of frenzy and pressure, but I’m not. So if I were him, I wouldn’t want to sign with the Yankees or Dodgers or any other big-market team that would thrust me into an unceasing spotlight. I would look for an under-the-radar, maybe up-and-coming team where I could come into my own slowly, with a slightly smaller hoard of fans and reporters following me everywhere I went.

With that in mind, I think Ohtani should sign with the Minnesota Twins. The Twins have a lot going for them. For one thing, they can offer $3,245,000, third most of any team and just narrowly behind the Rangers and Yankees. For another, they’re an AL team that can use a DH. And crucially, they’re a young team that is probably a couple years away from World Series expectations. Instead of parachuting into a high-pressure clubhouse in New York or L.A., Ohtani could grow alongside Byron Buxton, Miguel Sano, Max Kepler, Jose Berrios and company. He can find his bearings before the team is ready to compete.

Plus, Minneapolis is an underrated city.

Jay Rigdon:  If I were Shohei Ohtani, my choice would be clear. While plenty of teams can certainly present tempting offers, there’s only one team that would give me what I really want, at least right now. And that’s why I’d be signing with the Nippon Ham Fighters.

That’s because the current CBA, even with the silly grandfathered posting clause that benefits Ohtani’s current team, if not Ohtani himself, is horrendously unfavorable for players like Ohtani, rare as they are. (It’s unfavorable for all players, to start with, but it’s most unfavorable to young prospects both domestic and foreign, for a variety of reasons.) If Ohtani waits two years, he could sign an unlimited contract at age 25, cashing in as quickly as possible with the kind of teams he’s probably already limiting himself to. It’s already highly unlikely he’s going to the Rays or the A’s just because there’s a level playing field financially thanks to his artificially depressed price.

The teams Ohtani is going to pick from are all going to be in the market for a player of his caliber at 25, still an absurdly young age, and assuming continued health and quality performance (which is a big if for a pitcher, but the risk of missing out on a massive payday is just as big if he takes what amounts to the minimum this offseason and locks himself in now) Ohtani would be in line for a bidding war between the teams that can afford to pay him what he’s clearly worth.

If I’m Ohtani, I’m not settling for anything less.