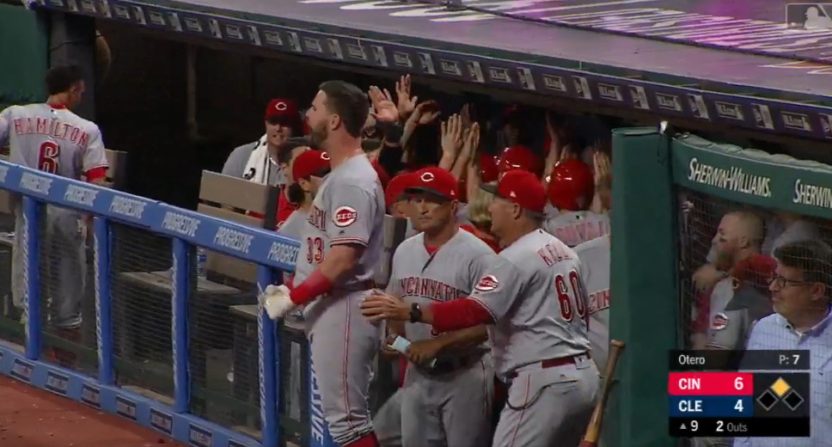 Baseball produces plenty of remarkable comebacks, but what the Cincinnati Reds did Tuesday night was on another level. They were trailing the in-state foe Cleveland Indians 4-0 in the top of the ninth following eight scoreless innings and 12 strikeouts from Cleveland starter Trevor Bauer, and although Scooter Gennett (hit by pitch) and Eugenio Suarez were able to get on base against reliever Cody Allen, that was followed by a strikeout from Jesse Winker and a flyout from Tucker Barnhart. That left the Reds with runners on first and second, but they were still facing a four-run deficit and had just one out left. And then they promptly scored seven runs, producing one of the stranger win probability graphs you’ll ever see:

That moment when the entire Indians roster was stricken with the bubonic plague was crazy. pic.twitter.com/xQ5gS92My2

This was pretty historic, too:

The last time the Reds scored 7+ runs in the 9th inning after being shutout in the first 8 innings was 8/23/1919 vs Philadelphia.

How’d that happen? Well, it all started with pinch-hitting. Infielder Jose Peraza, hitting .273/.322/.374 in 381 plate appearances this season, came in for starting shortstop Alex Blandino (who was batting eighth and hitting .221/.307/.279 on the year), and he hit what MLB GameDay described as “a soft line drive to first baseman Yonder Alonso.” The Indians weren’t able to record an out on the play, and Gennett scored, reducing the deficit to 4-1 with runners at first and third.

The Reds then made another substitution, bringing in Adam Duvall (hitting just .201/.282/.398 in 312 plate appearances this season) for starting center fielder Billy Hamilton (.235/.315./.318) in the ninth slot, and Duvall promptly cracked a double to center field, scoring two runs and making the score 4-3. Allen then intentionally walked leadoff hitter Scott Schebler, then walked Dilson Herrera to load the bases. At that point, Allen was pulled for Dan Otero, but that didn’t save the day for Cleveland. Joey Votto came up, and he hit a three-run double into right-center field:

As ESPN’s stats account noted, Votto had done this before:

Joey Votto has 2 career plate appearances with the bases loaded, 2 outs, down 1, in the 9th-inning or later in his career.

He hit a walk-off grand slam in the first instance (May 13, 2012 vs Nationals) and tonight he hit a go-ahead bases-clearing double against the Indians. pic.twitter.com/5AaTITnDot

So maybe Votto’s clutch, or (more likely) he’s just really good. Votto’s hitting .292/.425/.444 this year in what’s even a bit of a down year by his standards, so heroics from him are a lot more probable than they are from the light-hitting pinch-hitters who started this off. At any rate, his double put the Reds up 6-4, and they added an insurance run later on another single from Suarez (following an intentional walk to Gennett). They wouldn’t need it, as while the Indians started the bottom of the ninth with a Tyler Naquin single, Raisel Iglesias promptly struck out the next two batters and then got Francisco Lindor to ground out, ending the game and ending one of the weirdest comebacks in a while.