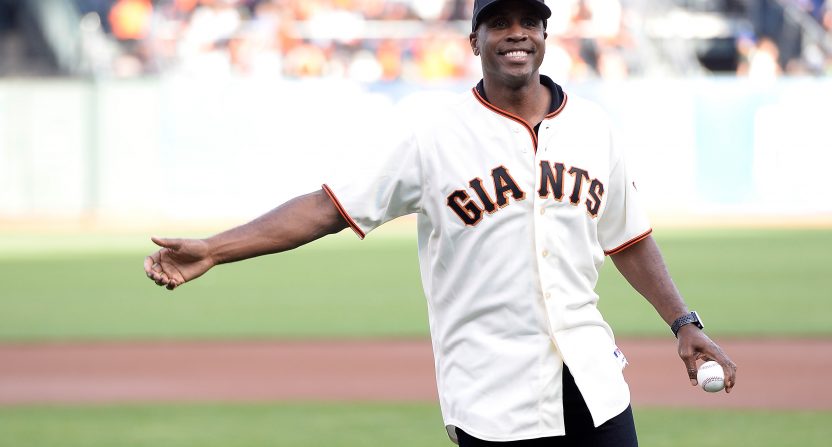 Barry Bonds is one of the greatest hitters in baseball history, and his career saw him feared by pitchers and managers across the National League. Despite his abilities on the field, Bonds remains one of the two most prominent otherwise-likely Hall of Fame players (along with Roger Clemens) not in Cooperstown yet, with many citing known PED use and a late-career performance boost for not voting those two in. Add to the fact that Bonds was not easy to get along with—he had prominent moments of tension with the media and even his own teammates—and he’s often been seen as public enemy No. 1 amongst the baseball media.

While those all may seem like valid reasons for voters to omit Bonds (seen above throwing out the first pitch ahead of a 2014 World Series game) from Cooperstown, Astros manager Dusty Baker is still very confused about why Bonds’ name is not in the Hall. Baker, the manager of  the San Francisco Giants from 1993 through 2002 (Bonds played there for all those years), spoke to NBC Sports Bay Area’s Monte Cook this week after this year’s HOF selections were officially inducted Sunday. Baker told Cook Monday it makes no sense how David Ortiz (one of the 2022 inductees) got into Cooperstown on the first ballot, but Bonds has been waiting over a decade just to get in. And he said media bias definitely plays a part in Bonds’ continued exclusion.

“The voters (supposedly) like guys of high character, guys with no marks or any suspicions about their reputation—or maybe it’s how you treated the media.”

The 73-year-old manager then added that the media bias towards the Yankees and Red Sox—the two preeminent franchises in the majors—have played a part in Ortiz getting in, despite him also facing criticism for a failed test in 2003.

“[MLB] is more partial to Boston and New York and the East Coast teams,” he said. “Whenever we go to the playoffs, we always have to see what New York or Boston is going to do before we can even determine what time we’re going to be on TV.”

“I love Papi. But if you dig deep enough, everybody has something suspicious or something that they aren’t crazy about everybody knowing.”

The argument stands true in many cases, but not for Clemens, who played for both the Red Sox and Yankees and has yet to be inducted into the Hall.

While it’s definitely hard to deny Bonds’ greatness prior to PED use, voters will always remember a juiced-up Bonds during the early 2000s who was feared by pitchers. He smashed 73 home runs in one season in 2001, a record that still stands, but one that many put an asterisk next to.

On the flip side, fans in San Francisco seem to still love Bonds. They gave him a standing ovation during Will Clark’s jersey retirement on Saturday.

Awesome seeing Barry Bonds get embraced by fans like this pic.twitter.com/jMysSYCRjU