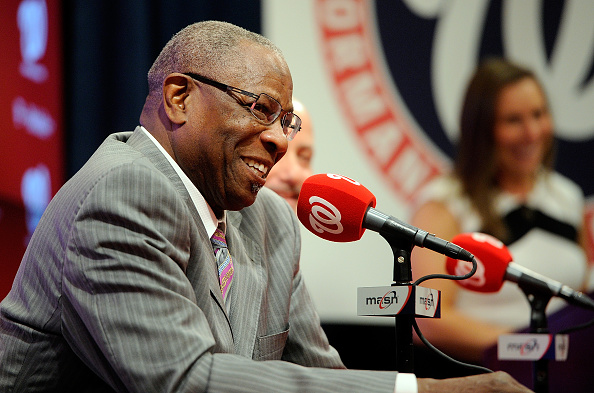 New Washington Nationals manager Dusty Baker held court at the MLB Winter Meetings on Tuesday, and provided the media members in attendance with some deeply nuanced thoughts on domestic violence and race.

Baker was asked about the domestic violence allegations involving his former player, Reds closer Aroldis Chapman. Baker didn’t exactly condemn Chapman, and had some absurd comments about MLB’s domestic violence policy as well. These quotes are via NBC Sports.

Q. Dusty, you had Aroldis Chapman when he broke into the majors. What was that process like? Were you surprised by the report?
DUSTY BAKER: I don’t believe reports. Who knows why? I’m not one to judge on how the whole thing happened.

There was a couple times when I had to stop him from quitting or going back to Cuba because he was lonely for his family. So I went through a lot of stuff with Chapman. I got nothing but love for the young man.

And why doesn’t Baker believe the reports about Chapman? Because he didn’t read the police report and heard about what happened from his son.

Q. Were you surprised by — I don’t know how much you read about the allegations.
DUSTY BAKER: I didn’t read it.

Q. I believe you. I didn’t know if you heard anything.
DUSTY BAKER: I heard it from my son. I mean, who’s to say the allegations are true, number one. And who’s to say what you would have done or what caused the problem.

Ignorance? What appears to be some victim blaming? Of course.

Then, Baker was asked about MLB’s new domestic violence policy, and his response wasn’t exactly what you’d expect.

Q. Dusty, do you believe that it’s a good thing that baseball now has a domestic policy?
DUSTY BAKER: Yes.

Q. Domestic violence policy?
DUSTY BAKER: Yeah. I think it’s a great thing. I mean, I got a buddy at home that’s being abused by his wife. So I think this policy needs to go further than the player. I think the policy should go to whoever’s involved. Sometimes abusers don’t always have pants on.

I think we need to get them both in a room and try to come up with something. It’s a bad situation. That’s the first thing my momma told me when I was a kid. Don’t hit a woman, even my sister. Man, I was like you better leave me alone before I tell my momma.

It’s a bad situation. I learned that young, but a lot of people maybe didn’t learn that.

Dusty also took questions not related to domestic violence, and managed to trip over his own feet when talking about the Nationals roster. What does Dusty think the Nationals need? Well, team speed for one thing – and to bring in more team speed, the Nationals need more minorities. These quotes via CSN Mid-Atlantic.

What specifically have you told the front office you’d like that you don’t have yet?
“You’re always in need of left-handed pitching, left-handed hitting, and in need of speed. I think that’s the No. 1 thing that’s missing, I think, in the game is speed. You know, with the need for minorities, you can help yourself. You’ve got a better chance of getting some speed with Latin and African-Americans. I’m not being racist. That’s just how it is.”

But hey, at least he’s committing to Jonathan Papelbon as his closer! (again via CSN Mid-Atlantic)

Do you think Jonathan Papelbon will be your closer, and do you see that situation being a distraction?
“No, I don’t see it as a distraction. How am I going to foresee a distraction in advance? I’ve got to wait until I get there first. I don’t even know Papelbon. I mean, right now Papelbon is my closer. I’m not one to foresee problems before they become a problem.”