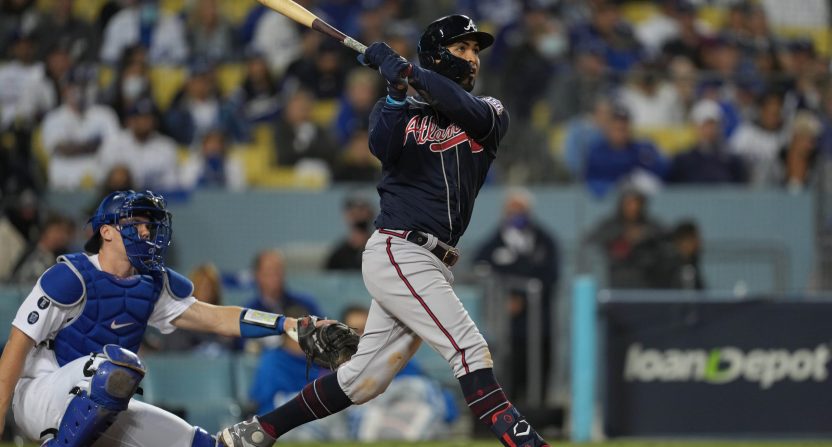 The baseball world could all feel the National League Championship Series momentum swinging in favor of the mighty Los Angeles Dodgers on Tuesday night (the Dodgers became betting favorites too), after the Dodgers made a late comeback to take down the Atlanta Braves in Game 3. However, the Braves still had a 2-1 series lead, and they had the opportunity to make up for that heartbreaking loss just 24 hours later — that’s the beauty of baseball! — and get within one win of the World Series.

Well, the Braves did just that, with a convincing 9-2 win over Los Angeles in Game 4 of the NLCS at Dodger Stadium.

Atlanta cranked four home runs on the night, including three dingers vs Dodgers starter Julio Urías- two of which came in back-to-back fashion in the second inning.

And the first homer — starting a back-to-back — came from Eddie Rosario, who crushed the baseball all night.

The Braves go back to back vs Julio Urías!

First, Eddie Rosario went the other way for a solo homer on an 0-2 count. ⚾️💣 pic.twitter.com/iNGSh00Ax7

Rosario went 4-for-5 with two homers, a triple, a single, and three runs. In the top of the ninth, he needed a double to hit for the first cycle in NL postseason history. He didn’t get the double, but he did get a three-run homer to serve as the dagger.

Eddie Rosario needed a double for the cycle.

Instead he hit a 3-run homer. Hey, that works.

9-2 Braves in the 9th. pic.twitter.com/uxgpuwYPxm

Eddie Rosario has been the National League's 𝐛𝐞𝐬𝐭 hitter this postseason. pic.twitter.com/esW3eYKaJ1

So, now the Braves will get up to three opportunities to secure a World Series berth. Then again, this is exactly where the NLCS was last season, before the Dodgers came back to win three games en route to a World Series title.

But the Dodgers at the moment are not the Dodgers of a few weeks ago. Max Muncy and Clayton Kershaw are very important players currently out with injuries, and center field defense has been a mess.

Looks like Julio Urías wanted Gavin Lux to make a better effort on this play pic.twitter.com/zQqE5Bm3Zc

you know the dodgers have a center field problem if even mookie betts is making errors out there pic.twitter.com/okYHBNlpOY

Yes, the Dodgers could absolutely win three games in a row (Five Thirty Eight gives that a 19% chance of happening, which sounds about right), but this team is very vulnerable at the moment and it will be a very difficult challenge- especially with needing to win Games 6 and 7 in Atlanta.

Whatever happens from here, it shouldn’t take away from this being an absolutely remarkable run by a Braves team — winners of 88 games in the regular season — that lost superstar outfielder Ronald Acuña Jr. for the season in July. Few people had the Braves still winning the NL East after that, and very few would’ve had them one win away from the World Series (especially vs the Dodgers, and through just four games).

The Dodgers will look to keep the series alive in Game 5 on Thursday in Los Angeles, while the Braves will try to lock up their first NL pennant since 1999.