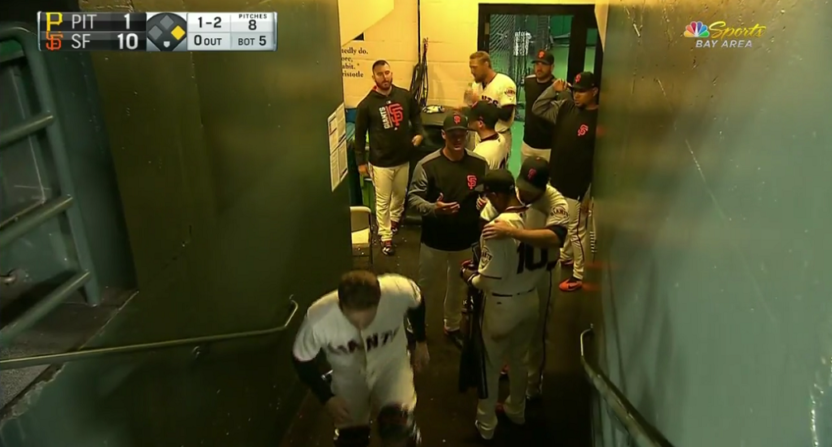 On Tuesday night at AT&T Park, Eduardo Nunez got hugs from his San Francisco Giants teammates as he left the dugout in-game, making it pretty clear that he had just been traded:

USA Today’s Bob Nightengale followed up with a tweet that the Giants are getting two pitching prospects in the deal:

This trade was hardly a surprise, as Boston’s interest in Nunez has been well-documented in recent weeks due to their brutal production from the third base position this year. The Red Sox currently rank second-to-last in WAR (-0.8) according to FanGraphs at third base, and are far and away worst offensively at the position this season (a .589 OPS and 53 wRC+).

So, getting an upgrade seemed like a pretty good call for a team trying to maintain their lead (currently 1.5 games) over the New York Yankees in the AL East.

And Nunez should indeed provide a substantial upgrade to the performance they were getting at the position. The 30-year-old has been an extremely consistent hitter over the last few years, and is currently sporting a rock-solid .308/.334/.417 slash line, with 18 stolen bases, and a 1.2 fWAR. He’s also a solid performer defensively and a well-liked teammate — as you could see in the video clip — who should fit in well in the Boston clubhouse.

The Giants never thought they’d be in this position when the season started. Expected to be one of the top NL Wild Card contenders and potentially even give the Dodgers a run in the NL West, the Giants have been the second-worst team in baseball with a record of 39-63. It will be interesting to see if the trade of Nunez — an upcoming free-agent — is just the beginning of a series of moves from the Giants before the July 31st deadline.

Buster Olney reported on Tuesday night (before the Nunez trade) that the team is willing to listen on starting pitchers Johnny Cueto and Jeff Samardzija:

Giants are open to talking about Johnny Cueto and Jeff Samardzija in deals.

UPDATE: Shaun Anderson and Gregory Santos are the pitching prospects that go to the Giants in the trade.

And the Red Sox referred to Nunez as a “utility infielder” in their press release:

Of note in the release: Sox refer to Nunez as “utility player.” pic.twitter.com/j623HiYotU

The Red Sox recently called up top prospect Rafael Devers to play third base, so it’s possible that Nunez will just play several positions for them (as he can).