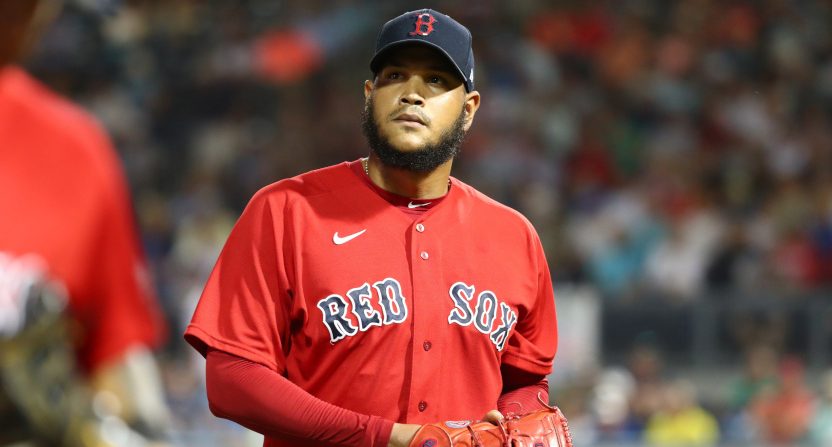 Some of the discussion with sports returning amidst the COVID-19 pandemic has been on players getting the disease, quarantining, testing negative and then returning to play. But the effects of this novel coronavirus can be longer-running for many; there have been a lot of deaths globally (679,000 as of Saturday), and even some of those who have “recovered” have spoken about long-lasting effects from the disease. The latest case there from the sports world involves Boston Red Sox pitcher Eduardo Rodríguez (seen above in a March 11 spring training game against the Tampa Bay Rays) , who the team announced Saturday will be shut down for the remainder of the 2020 season thanks to myocarditis (or heart inflammation), which doctors believe may be connected to Rodríguez’s bout with COVID-19 earlier this year. (Myocarditis has been connected to COVID-19 in many cases.)

Rodríguez, 27, was diagnosed with COVID-19 last month before the team’s preseason training camp. A couple of weeks ago, when he arrived at training camp ahead of the planned 60-game season, he spoke to media about how the disease had affected him. And his comments were frightening:

Rodriguez tested positive for the virus just before reporting to camp, and he felt all the symptoms. It was the sickest he’s ever been, he said.

“The first day, I started feeling a little bit of a headache, fever,” he said. “I know I had something in my body I never felt before. I just went home and stayed home the whole time. I don’t know exactly where I got it.”

…Rodriguez, whose wife also got sick, said he felt like he was “100 years old.” Improvement didn’t come for 8-10 days, when he felt up to light cardio and arm work.

Last Sunday, Rodríguez was diagnosed (after a MRI) with myocarditis, just over a week after he was initially cleared to resume baseball activities. That led to him being shut down for a week until the team’s medical staff reassessed him. And that eventual reassessment has now led to Red Sox chief baseball officer Chaim Bloom saying that they’re shutting Rodríguez down for the year, as Ian M. Browne of MLB.com writes:

“This case, while it’s something that’s persistent, is not something that has impacted or damaged the functioning of his heart, which in that event, the prognosis is good and these things just take time,” said Bloom.

“Now, myocarditis following COVID is obviously not something that the medical community has a lot of data on because the virus itself is new, much less in an athlete, but everything we know about myocarditis itself indicates that when you have a case like this, the long-term prognosis is good, the recovery should be complete, it’s just a question of time.”

…“We are confident he’s going to make a full recovery and that his long-term prognosis is excellent, but the fact of the matter is there just isn’t enough time left this season to safely ramp him back up to pitching,” Bloom explained. “Obviously, it’s unfortunate, not something any of us are happy about, least of all Eduardo. But we need to make sure we’re taking care of him. This is not something to mess around with, so we’re shutting him down.”

Bloom is correct that this “is not something to mess around with,” and it makes sense for the Red Sox to shut Rodríguez down for the season if they don’t think that there’s enough time to “safely ramp him up back to pitching.” But even the comments about how “excellent” his long-term prognosis is should be viewed with caution, because as Bloom notes, there isn’t a whole lot of data out there on how myocarditis works when it comes after COVID-19.

It’s logical for Rodríguez not to pitch for the rest of this season (and, of course, there’s some question at present as to how long that season will last), and hopefully that will lead to a full recovery for him. But his case is further evidence that COVID-19 isn’t necessarily something that you fully recover from. It can lead to plenty of further complications, and Rodríguez’s situation shows that.