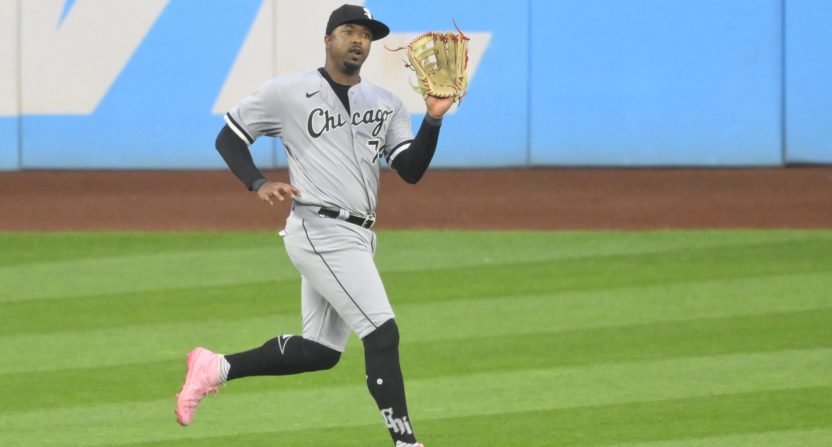 Playing left field, Jiménez caught a flyball off the bat of José Ramírez to end the bottom of the sixth inning for the Cleveland Guardians. While it was a running catch, nothing seemed out of the ordinary. Only, something went wrong. Chicago’s training staff came out and walked off of the field with Jiménez. When the White Sox came out for the seventh inning, Jiménez was out of the game. The White Sox announced that he was taken out with “tightness in his right leg.”

Eloy Jiménez left the game with tightness in his right leg. He is day-to-day.

This is a road that Jiménez is all too familiar with. He’s already missed a lot of time this season. An injury kept him sidelined for all of May and June, as well of parts of April and July. That injury also happened on a seemingly routine play, as he was running to first base on a groundout.

MLB fans were quick to discuss his injury history in the aftermath of this latest incident.

If Eloy re injured his hammy THAT easy, he was brought back WAY TOO SOON, or is made of styrofoam. It’s a toss up. Oh White Sox 😢😢😢

I am absolutely shocked that Eloy appears to have hurt himself while playing the outfield. This has never happened before.

I’ve never seen anything like Eloy Jimenez. This will be the 2nd time he’s hurt himself simply running without any sort of contact. It’s truly hard to understand it.

Repeat after me: Eloy Jiménez is a DH. That is where he belongs.

A player hurting himself on a seemingly routine play is confusing. One thing that is worth mentioning, though, is that Jiménez did awkwardly field a ball earlier in the game.

At the time, that seemed like not much more than a blooper. But it could be that he hurt something on that play.

It’s been a disappointing season for Jiménez on multiple fronts. Not only has he missed a lot of time, but when he’s been in the lineup, he’s struggled, hitting .197/.239/.303. The last thing he needs at this point is another injury that will either keep him sidelined, hinder his performance, or both.