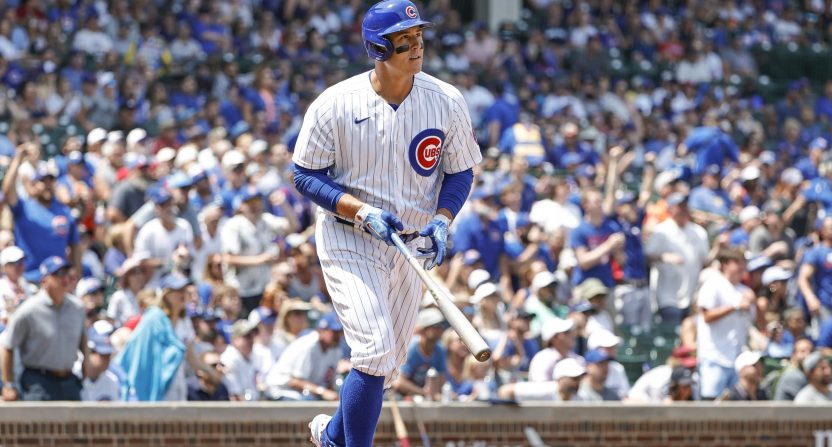 It’s been no secret that the Cubs are clear-cut sellers this trade deadline, with trades of outfielder Joc Pederson, lefty setup man Andrew Chafin, and righty setup man Ryan Tepera (earlier on Thursday) serving as evidence. But things went to another level on that front for the Cubs — and their fans — in a trade with the New York Yankees on Thursday.

The Cubs have traded first baseman Anthony Rizzo to the Yankees in exchange for minor-league prospects Kevin Alcantara (outfielder) and Alexander Vizcaíno (pitcher).

The Yankees are trading Alcantara and Vizcaino for Rizzo. The Cubs are picking up all of Rizzo’s remaining salary.

This move comes one day after the Yankees acquired an even more powerful left-handed bat from the Texas Rangers in outfielder Joey Gallo. And the short right field porch at Yankee Stadium surely played a factor in Yankees general manager Brian Cashman targeting these players; perhaps their production will be taken to another level in a hitting environment suited to their skills.

The Yankees now have a lineup full of slugging — and Rizzo provides quality contact and on-base skills  to go with that — and should be a very dangerous. Cashman hopes this firepower can lead the Yankees to a Wild Card berth; they’re currently three games behind the Oakland Athletics for the second Wild Card slot (the Yankees’ Al East hopes are a huge longshot, currently placed nine games behind the Boston Red Sox).

But the bigger story out of this is the Cubs trading the heart-and-soul of their team over the last several years, which featured a World Series title in 2016 and three NLCS appearances.

The Rizzos are walking around Wrigley Field, getting some final photos here. pic.twitter.com/8Bpr3WprVf

The Cubs acquired Rizzo in a trade with the San Diego Padres in 2012, and he proceeded to become a four-time All-Star and the de facto team captain in the best run in organization history. While the Cubs have been heavily rumored to trade closer Craig Kimbrel and 2016 NL MVP Kris Bryant ahead of this deadline (and Kimbrel at the very least will almost certainly be traded; Bryant likely will be as well), the Rizzo trade came as a bit of a shock to fans (and especially with it being the Yankees; the Red Sox have been the most-linked team to Rizzo over the last week). Even with his upcoming free agency, the expectation has been that the Cubs would try to keep Rizzo around in 2022 and beyond.

Anthony Rizzo has a message to @Cubs fans.

But this just shows how dead-set president of baseball operations Jed Hoyer and the Cubs’ front office are on this rebuild (potentially a “retool,” but there’s a lot of work to be done this offseason if so) and loading up the farm system with prospects. And it could very well be that Tom Ricketts and the Cubs’ ownership are making Hoyer feel that the resources won’t be there enough to get the Cubs back to a realistic title contender in the near future, leaving Hoyer with no choice but to maximize the opportunity to acquire prospects and think long-term.

Hoyer was also part of the Red Sox front office that drafted Rizzo, he was the Padres general manager when San Diego acquired Rizzo from Boston, and he was the Cubs general manager — with Theo Epstein the president of baseball ops — when Chicago traded for Rizzo. So, this move was surely very difficult for him to make on a personal and emotional level, and further demonstrates how much conviction he has in this plan.

And the Cubs did come away with very intriguing prospects in this trade, at least.

FanGraphs ranks Alcantara the No. 120 prospect in baseball and No. 7 in the Yankees’ system. He joins outfielder Brennen Davis (60 FV) and infielder Reginald Preciado (50 FV; acquired in the Darvish trade) as the only prospects with a Future Value of 50 or better according to FanGraphs. The 19-year-old is 6’6″ and with tantalizing upside. He currently has a .360/.448/.520 slash line in Rookie ball.

Vizcaíno, 24, is a hard-throwing right-hander who slots it at No. 12 on the FanGraphs’ rankings with a Future Value of 45.

Following the trade, FanGraphs has updated their Cubs list, slotting Alcantara in at No. 2 and Vizcaíno at No. 11 in Chicago’s farm system.

Alexander Vizcaino: Big fastball, best changeup in the system. Still trying to find the consistency on a breaking ball.

Kevin Alcantara: A lot of tools in a high-upside player in a big frame. Yanks were intrigued by the quality of his contact. Needs to sharpen plate discipline.

I got here a little late, but apparently Alexander Vizcaino looked “great. Extremely polished, he’s made a lot of progress,” according to a scout who was here. Said he sat 98-99 MPH. Something for Yankees fans to be excited about. He’s recovering from a right shoulder injury.

So, the Cubs absolutely did great here value wise in the trade return, but a large percentage of the fan base understandably isn’t going to care about getting a couple of prospects over keeping a franchise legend that still has a lot of good baseball ahead of him. And that’s while the Yankees are acting like how a big-market organization should, continuing to add proven talent to a team that hopes to make a title push.