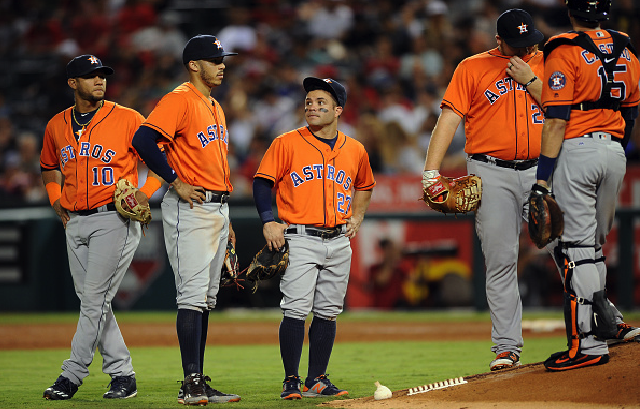 The Houston Astros certainly looked like one of MLB’s teams of the future last season, with several developing players emerging as stars. Houston made the jump from up-and-comer to contender, and aimed at further improvement in 2016.

But following up on breakout success can be a difficult task for a young team. Would players continue to drive toward getting better, applying lessons from major league experience toward further development? Could some complacency set in? How would young players handle the competition adapting and figuring out ways to beat them? The Astros suffered a setback in 2016, though nothing they can’t rebound from. General manager Jeff Luhnow might want to sprinkle in some more veteran talent to help guide his young core, however.

Preseason Prediction: […] all of the core talent that fueled last year’s wild-card run is still in place and should get even better. And last year’s trade deadline acquisitions will provide more of a benefit throughout a full season (which might be why Houston wasn’t extremely active during the offseason).

At the very least, another wild card bid is there for the taking. But a division title is the clear next step for a team that could be the best in the American League. (Ian Casselberry, March 3)

What Went Right: Jose Altuve is something that will always go right for the Astros. The second baseman is set to win his second American League batting title in the past three seasons, with a .337 average (15 points ahead of the Red Sox’s Dustin Pedroia) as of this writing. And that’s despite his “worst” month of batting .269 in September. At one point in late August, Altuve had a .360 average.

Those numbers weren’t just built on singles and speed turning into doubles either. Altuve hit for a surprising amount of power, reaching career highs in home runs (24) and OPS (.929), along with 42 doubles and 96 RBI. That power may have come at the sacrifice of some speed, however. Altuve’s 28 stolen bases (caught 10 times) is his lowest total among five full major league seasons.

George Springer managed to stay healthy over a full season. Not surprisingly, he put together his best overall season as a major leaguer, slugging 29 home runs and 29 doubles with 82 RBI. Evan Gattis also showed what he’s capable of doing when staying in the lineup, surpassing the 30-homer mark for the first time in his MLB career. And though his numbers dipped slightly in his first full season, reigning AL Rookie of the Year Carlos Correa maintained his place as one of the best shortstops in MLB, with a slash average of .276/.363/.455, 36 doubles, 20 home runs, and 96 RBI.

What Went Wrong: A significant factor in the Astros’ emergence as a contender last season was the strong starting pitching they received at the top of their rotation, led by AL Cy Young Award winner Dallas Keuchel. But the left-hander couldn’t match that level of performance in 2016 and pulled the Houston rotation down with him. As great as Keuchel was last season, he was nearly equally awful this year, posting a 4.55 ERA with a 9-12 record.

A slight dip in velocity and an inability to locate his cutter contributed to his problems. But perhaps 2015’s heavy workload (232 regular season innings, 14 postseason) caught up with him. The shoulder issues that sidelined Keuchel at the end of the season certainly point to that. Fortunately, there don’t appear to be more serious structural issues in that left shoulder. The Astros have to hope that essentially being shut down in September, along with a full offseason to rest and recover, can help Keuchel rebound next season.

However, Keuchel was hardly the only Astros’ starting pitcher that struggled in 2016. Collin McHugh was an excellent No. 2 starter last year, but compiled a 4.53 ERA with more than 10 hits allowed per nine innings, while also serving up 25 home runs. Mike Fiers saw his strikeout rate drop and ERA increase to 4.48, while throwing 17 wild pitches. Doug Fister posted a 4.64 ERA. And Lance McCullers had difficulty staying healthy, making only 14 starts.

Most Surprising Player: Nearly all of the surprises the Astros dealt with this season were unpleasant ones. But the team may have found its third baseman of the future in Alex Bregman. With Luis Valbuena dealing with a hamstring injury that eventually required season-ending surgery, last year’s No. 2 overall pick stepped in after blazing through the minors. A natural shortstop (who would have to find a new position with Houston’s middle infield well established), Bregman stepped over to third base and handled the position well (playing better defense than Valbuena).

Perhaps more importantly, the Astros didn’t lose any offensive production at third base with the rookie. That probably shouldn’t have been a surprise, given Bregman’s success in the minors (.300 average, .891 OPS). But a consistent plate approach gave manager A.J. Hinch someone to put in the lineup’s No. 2 spot ahead of the free-swinging sluggers in the batting order. Bregman’s development comes at just the right time with Valbuena set to become a free agent, giving Houston an opportunity to allocate resources elsewhere. (Get some more pitching, Luhnow.)

Most Disappointing Player: Considering what the Astros gave up to trade for Ken Giles (four players, including Vincent Velasquez, who would have helped the starting rotation significantly), the right-hander’s inability to win the closer job has to be viewed as a significant disappointment. But Giles still provided a major strikeout threat out of the bullpen, mowing down 101 batters in 64.2 innings. And Houston still has him under club control for four more seasons.

No, the true disappointment has to be Carlos Gomez, who was acquired last year with the hopes of being an impact player who could give the Astros an extra push late in the season and into the postseason. But injuries prevented him from making a notable contribution. This year, Gomez provided a hole in center field that even Tal’s Hill couldn’t cover up. He compiled an abysmal .210/.272/.322 triple-slash average with five home runs and didn’t make up much of the difference with his outfield defense.

By mid-August, the Astros decided they couldn’t compete for a postseason spot with Gomez in the lineup. The team designated him for assignment, which was a stunning move considering Gomez’s past production as a MLB player and what the Astros had given up the previous year to trade for him (and Mike Fiers). But with Gomez set to be a free agent at the end of the season, there was no sense in continuing to hope for a turnaround when his production was so poor.

The Future: Even with calling up several top prospects to the majors, in addition to trading off others for veteran talent, Houston’s minor league system is still loaded with several players who should make contributions during the next few seasons. Going into the season, MLB.com rated the Astros with the No. 10 minor league system, and only one of those top prospects (Bregman) broke through to the majors this year.

First baseman A.J. Reed didn’t emerge as hoped, and Tyler White cratered after an impressive start to the season. But both players figure to be a part of the Astros’ first base-DH mix next year. Pitchers Francis Martes and David Paulino might be ready to make the jump to the majors as well, especially when Houston has shown a willingness to push top prospects into the deep end and see if they’re ready for the challenge.

The Astros had a difficult time keeping up with the Texas Rangers in the AL West (going 4-15 in head-to-head match-ups certainly didn’t help) and were leapfrogged in the division and wild card races by the Seattle Mariners. But Houston did contend despite its many pitching issues. That’s an area which Luhnow absolutely must address for next season. There’s no window in danger of closing with all the young talent on hand, but a promising lineup shouldn’t be squandered by a poor pitching staff either. Even with turnarounds, another established arm for the top of the rotation would be welcome.