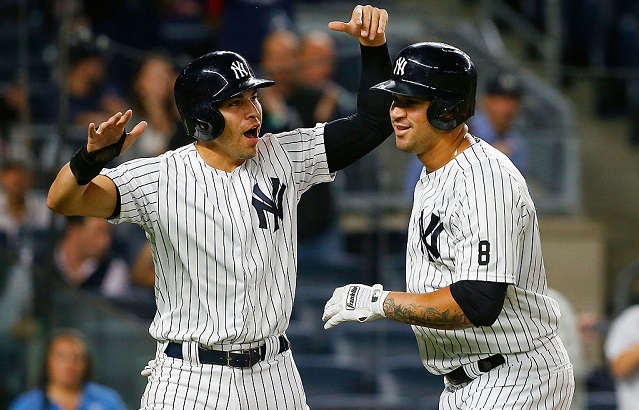 It was a tale of two seasons for the New York Yankees, who started out the year trying to extend their window of contention with aging veterans like Alex Rodriguez and Mark Teixeira before giving up on today to play for tomorrow.

Coming into the season, there was no question the Yankees were in win-now mode as they traded for the free agent-to-be Aroldis Chapman to bolster what was already the best back end of a bullpen in baseball, while adding Aaron Hicks and Starlin Castro to fill minor holes rather than trying to start over completely. This strategy lead to a lackluster offense (21st in MLB in runs in the first half), a .500 record and fourth place in the standings when the trade deadline came around. Finally realizing their position, the Yankees moved their most valuable assets (Chapman, Carlos Beltran and Andrew Miller) and removed those they couldn’t trade (Rodriguez) resulting in a 30-24 record from Aug. 1 through Sept. 28 and a much revitalized farm system.

Preseason Prediction: The Yankees are a solid team. They do have a number of older players, but they’re probably younger than they have been in years. And their older players are still mostly good. Offensively and defensively they’re pretty strong. The bullpen is another are of strength, especially once Chapman returns. I have significant reservations over their rotation however. Still, if they can keep it intact long enough they should make a real push for another division flag and short of that should be in competition for a wild card spot all year. (Derek Harvey, March 17)

What Went Right: Even without Chapman and Miller for the end of the season, the Yankees bullpen was still the second-best in the AL for the entire season, sitting behind only Houston. Dellin Betances continued to lead the way as he went to his third straight All-Star game as a set-up man and the Yankees were able to fill in the gaps with surprising seasons from Luis Severino, Tyler Clippard, Richard Bleier and Adam Warren.

Ultimately, however, the best thing that happened to the Yankees this year was that their front offense finally joined the modern baseball way of thinking. Rather than just trying to outspend their competition, they took to the small-market strategy of trading short-term assets for top prospects and now have four of the top 23 prospects in baseball (according to MLB Pipeline) and six of the top 100. Of those, Clint Frazier (#16) and Justus Sheffield (#79) came from Cleveland for Miller, while Gleyber Torres (#18) came from Chicago for Chapman. While the Cubs and Indians are happy for the moment because these additions made them stronger for 2016, the Yankees will almost certainly “win” these trades and all of baseball should be scared if New York continues to make shrewd deals, in addition to spending when needed.

What Went Wrong: It turns out that really old baseball players aren’t as good as young baseball players, even if they are paid extraordinary amounts of money. The Yankees’ top position player by fWAR was Gary Sanchez and he only played 50 games for the team. Teixeira had an absolutely dreadful year and Rodriguez was even worse, giving great reasons to retire following this season. While Beltran had a decent year at the plate before he was traded, he was so bad defensively that he almost completely eliminated his value and had to play some defensively because the Yankees were loaded with DH types. In fact, among regulars, only Didi Gregorius, Chase Headley and Jacoby Ellsbury provided a significant positive effort in the field, and only Brett Gardner and Gregorius did at the plate among those with at least 100 games played.

Most Surprising Player: Gary Sanchez came into this season as MLB.com’s 59th-best prospect and had been ranked in the top 60 since 2012, but being a highly-touted prospect is no guarantee for actual MLB play. He only played in 50 games this year, but hit 20 home runs, batted .311/.387/.689 with 42 RBI and was even a solid player behind the plate. Clearing out players like Beltran and Rodriguez allowed the Yankees to free up the DH spot for McCann (who should be one of the next players New York thinks about moving) and start Sanchez, making the biggest difference in turning a .500 team into a slightly better than .500 team.

In addition, to counteract all the trash-talking of old players before, CC Sabathia had quite the resurgent season this year with a 4.02 ERA and 2.5 fWAR. After three consecutive seasons with an ERA above 4.70, this was a major improvement and makes activating his vesting option for 2017 a little less painful.

Most Disappointing Player: Despite manager Joe Girardi’s insistence that the Yankees were “trying to win” and “didn’t do retirement tours,” it certainly seemed a bit like one as they carted Teixeira’s decrepit body out to first base day after day. Yes — at one point, he was not only a great hitter, but one of the best defensive first basemen in baseball. However, that is no longer the case. He was the Yankees’ worst defender this year and one of their worst hitters, yet he played almost every single day and only started four games at DH all year. Obviously, this was a case where Teixeira’s positive influence on the team made them want to keep him around (compared to their treatment of Rodriguez), but he should have seen a similar exit at a similar time.

Had the Yankees begun this youth movement earlier in the season, even using replacement level players like Rob Refsnyder and Ronald Torreyes to shift around their infield, there is a good chance they would be right with the three playoff contending teams in the AL East. It’s possible that had Sanchez been brought up earlier in the season, he wouldn’t have played at his current level the whole season. But there is no possibility he, or any of the other young players the Yankees have been using more recently, would have been as bad as A-Rod and Tex.

The Future: There still seems to be some friction between the Steinbrenners and general manager Brian Cashman, but there’s little question that the moves the Yankees made during this season (as opposed to those they made even as recently as the 2015-16 offseason) were the right ones. Frazier and Torres are likely to be superstars in short order and they only cost New York two relievers (two of the best in baseball, but still), an area in which they remain strong. They also have some homegrown prospects worth getting excited over, like Jorge Mateo, Aaron Judge and Blake Rutherford, for the first time in essentially two decades.

The Yankees didn’t add salary through free agency this past offseason and while they remain the second-highest paid team in baseball, there is an end in sight for the mega deals of the past. A-Rod and Sabathia will be off the books after next year and Teixeira will be in a week. There is still a lot going out to Masahiro Tanaka, Jacoby Ellsbury and McCann, but at least Tanaka is earning his share and the Yankees can take a $20M per year hit better than any other team in baseball. More importantly, Chase Headley and Starlin Castro are signed to long-term, team-friendly deals. This, combined with the youngsters coming up, mean that their window of contention may never shut. It will just move from the big-name free agent era that started in 2009 when they brought in most of those $20M+ per year players to a younger, more in-house developed version.