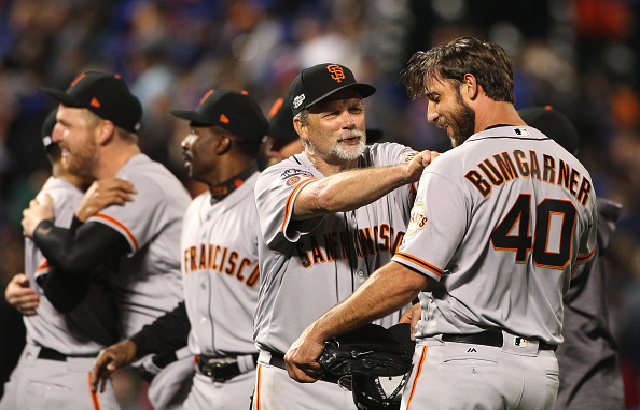 It had to happen eventually. No matter how many hashtags and catchphrases the San Francisco Giants came up with, they simply couldn’t win the World Series every time an even year rolled around.

However, you can forgive Giants fans for thinking this year’s team had an excellent shot at continuing the trend. San Francisco had the best record in baseball at the All-Star break, the offense looked dangerous up and down the lineup, and the rotation was the deepest it had been since 2010. But then, disaster: The offense went into hibernation, the bullpen’s lack of a reliable ninth-inning option led to a team-record 32 blown saves, they blew a huge division lead, and had to make the playoffs as the National League’s second wild card. Their bullpen failed them again in the NLDS, and now the Giants enter another winter where a major part of their club needs a complete overhaul.

Preseason Prediction: The Giants are a tough team to pin down because of the questions surrounding Cueto and Samardzija, but on paper they have arguably a stronger team than any of their World Series years. Their offense is one of the best in the league, and their rotation has the same potential. The Giants didn’t spend hundreds of millions of dollars this offseason to get marginally better; they’re a team built to reach the playoffs again, and anything less would be a disappointment. If everything pans out like they hope it will, that’s a goal that should be well within reach. (Dave Tobener, Feb. 26)

What Went Right: The Giants spent big on starting pitching last winter and their moves paid off. Jeff Samardzija was a solid innings-eater who at times looked like an ace, and Johnny Cueto was worth every penny the Giants invested in him. Madison Bumgarner had the best season of his career statistically and added to his postseason legend with an unreal performance in the NL Wild Card Game. Trade deadline pickup Matt Moore had his ups and downs, but towards the end of the season, he looked a lot like the pitcher that won 17 games for Tampa Bay three years ago.

As they often do, the Giants also plucked key contributors from the scrap heap. Conor Gillaspie did an amazing Will Clark impression in the playoffs and looks like he should be a big part of their bench going forward. Gorkys Hernandez likely earned a job as an extra outfielder next year. Trade deadline pickup Eduardo Nunez showed he can be an everyday player next year, as long as he stays healthy and should be a force near the top of the lineup next year.

What Went Wrong: We can start with the offense, where every player seemed to hit the skids after the All-Star break. The Giants didn’t have one regular hit .290 or better, their leading home run hitter was Brandon Belt with 17, and their highest OPS was Belt’s .868. They lost Hunter Pence, Joe Panik, and Angel Pagan for long stretches due to injury and the offense suffered as a result. Matt Duffy was expected to be a key piece in the middle of the lineup, but he struggled all year before he was dealt at the deadline. And Buster Posey had his worst full year offensively in the majors, though the prevailing wisdom is he’s been dealing with nagging injuries since at least May.

The bullpen… ah, the bullpen. The Giants somehow managed to blow 32 saves during the regular season, then self-destructed in Game 4 of the NLDS to end their year. Santiago Casilla, Sergio Romo, and Javier Lopez – part of the vaunted “core four” that helped the Giants win their three championships – all faltered this year, and there’s a good chance all of them have played their last games in Giants uniforms.

None of their younger arms could take the ninth-inning job and in spite of their efforts, the front office failed to trade for a closer at the deadline. All of these things led to a bullpen that just wasn’t up to snuff. It was a house of cards that finally collapsed at the worst possible time.

Most Surprising Player: The Giants had two first-round picks in 2008. One of them was Posey, who’s turned out to be pretty good. The other was Gillaspie, who bounced around the majors for a few years before being released twice last season. He signed as a minor league free agent in the offseason, was thrust into action after Duffy was injured, and performed admirably, hitting .262/.307/.440 while playing better defense than he’s given credit for.

Then, somehow, he flipped a switch in the postseason and hit .421/.421/.684 over the Giants’ short run, including the huge go-ahead homer in the ninth inning of the Wild Card game. He may not be a starter next year, but Gillaspie proved he’s a valuable piece to have on the bench and likely earned a major league contract next year.

Most Disappointing Player: It seems unfair to give this to just one player. So instead, it goes collectively to the Giants bullpen. There’s no other way to put it: They were a complete, total disaster that likely cost the team a chance at knocking off the powerhouse Cubs in the NLDS. Actually, the bullpen likely cost the team a chance at avoiding the Cubs in the first round altogether, had they been able to close out games and keep the Giants in the division lead. A major housecleaning is coming.

The Future: For all the doom and gloom, the Giants are actually set up quite nicely for 2017. For the first time in a long time, there are no major holes to fill in the starting rotation. They arguably have the best starting staff in the division, and that alone should make them de facto contenders next year. Their offense is good, in spite of so many players having down years, and a key addition or two (left field being the biggest need) should make them even better.

Obviously, the front office has a lot of work to do in overhauling the bullpen. The Giants have been reluctant to spend big money on closers since the Armando Benitez debacle, but they may not have a choice this winter. Championship windows can snap shut in a heartbeat, and with their offensive core getting another year older and Cueto having the ability to opt out after 2017, the Giants have to be feeling the pressure to win now with this team. Whether that means they spend big on someone like Kenley Jansen or Mark Melancon, or they revisit trade talks for someone like Wade Davis, remains to be seen.

The Giants showed a willingness last year to spend big money to fix their rotation, and it worked. That should embolden them to do the same with their bullpen. This team still has good bones, as the saying goes. A few key additions this winter, and they’ll be in great position to start winning in odd years, too.