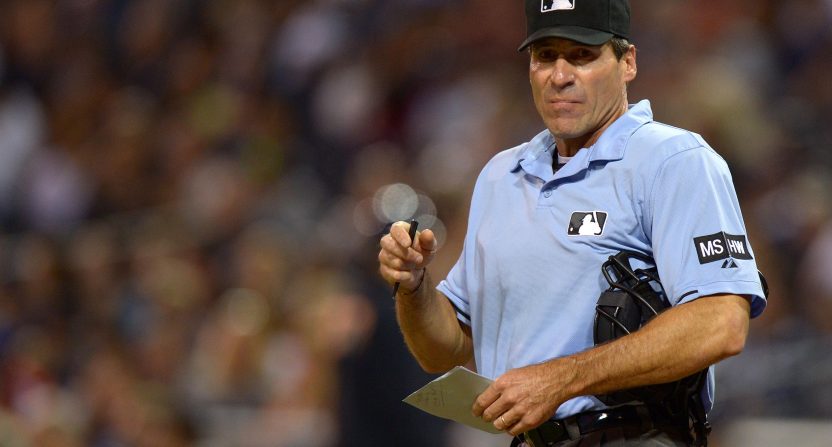 There’s the debate about whether or not humans should continue calling balls and strikes, seeing as how we now have technology capable of doing a more accurate job of it.

Veteran umpire Angel Hernandez is one of those people, and during Tuesday night’s Yankees-Blue Jays game in Toronto, he showed why.

In the bottom of the fifth inning, Masahiro Tanaka threw a pitch right down the middle to Toronto’s Randal Grichuk, which apparently meant “Ball One” to Hernandez.

This may have literally been a game-changing pitch. Grichuk should’ve had an 0-2 count,which would’ve been highly in Tanaka’s favor. Sure, the way catcher Gary Sanchez received the ball may have thrown Hernandez off a bit, but that pitch is clearly in the strike zone. Presentation and framing from the catcher shouldn’t make *that* big of a difference on perceiving that particular pitch.

Well, the missed strike call made it a 1-1 count, and Grichuk proceeded to crank a solo homer on the very next pitch. That began a four-run inning for the Blue Jays, and that was the difference in a 4-3 Toronto victory. Even the Blue Jays’ Twitter account mocked how the inning went.

And it wasn’t just one bad strike call in the inning from Hernandez. He seemed to miss four strike calls:

RT to spread the word! This HAS to be the final time we see Angel Hernandez. There is something clearly wrong here, @MLB.

Four missed strike calls in ONE INNING! Two of them were right down the middle! pic.twitter.com/M8QL0pAFZ7

This is nothing new from Hernandez, or CB Bucknor, or Joe West. But they somehow continue to keep their jobs.

1 thought on “Even for Angel Hernandez, this missed strike call is embarrassing”