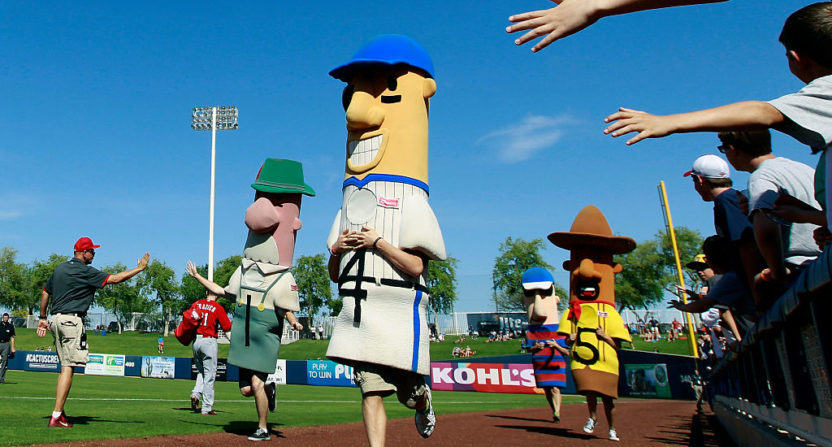 Just about everyone knows at this point that publicly financed stadiums, on balance, don’t work out for the municipalities funding them. Most often, the promised economic growth never comes and taxpayers wind up sinking millions into venues that don’t come close to paying for themselves.

That makes life difficult for officials in towns like Gilbert, Arizona who—due to ego, personal interest or delusion—decide they want a stadium no matter the cost.

Gilbert officials recently asked consultants to evaluate the economic impact of a spring training facility the town wants to build for the Milwaukee Brewers. The complex is expected to cost $90 million, and the Brewers have offered to pay only $20 million of that cost. According to the Arizona Republic, the consultants studied the matter and determined that, ” the cost of investing in the stadium versus the value of the mixed-use development may not be justifiable.”

This finding did not please those in Gilbert who desire a cool spring training complex in their town. So the chamber of commerce simply called up another consulting firm. Via the Republic:

Kathy Tilque, president and CEO of the Gilbert Chamber of Commerce, said the Applied Economics study was fairly limited in its scope and did not take into account the indirect economic benefits of a potential stadium.

The chamber is working with a different economic consulting firm to provide a broader economic analysis. That report should be completed soon and will be turned over to town officials for review, Tilque said.

“It would be a great thing not only for the East Valley but for Gilbert. We just need to make sure the numbers work,” she said.

It sounds as the chamber will keep “making sure the numbers work” until they actually do and will then push those totally-not-at-all-cooked numbers on Gilbert’s taxpayers. Because really, who even needs numbers when you have deeply researched assurances that, “It would be a great thing.”

As the great stadium finance website Field of Schemes points out, spring training facilities are a notoriously bad deal for the towns and counties that build them. They’re used one month of the year, for only a handful of games, and don’t often draw large crowds. Developers insist a new facility would bring $85 million into Gilbert, but Field of Schemes’ Neil DeMause says that’s basically nonsense.

[Developer David] Sellers said annual tax receipts from baseball would only be $880,000, but there would also be added money spent at local restaurants and hotels (people are really going to stay at hotels in Gilbert rather than drive there from a more happening place?), writing that “the Brewers coming into Gilbert is Gilbert tapping into a $850 million … Valley economic impact. Just 10 percent of that would be $85 million being spent in Gilbert that isn’t happening right now.” If the Brewers played, say, 15 home spring-training games at a 7,500-seat ballpark, that would only require each and every fan to spend $755 per game to make those numbers work out.

The situation in Gilbert, like in most places where officials want to build venues that won’t pay for themselves, will come down to public relations. Can officials dodge all evidence arguing against a new facility and convince taxpayers with empty assurances? Or will Gilbert residents and councilmen look past all the nonsense and consider the history? In essence, will Gilbert believe the consultants hired to assess the situation or the consultants hired to make that assessment more pleasing?

UPDATE: The mayor of Gilbert says Gilbert will not be giving the Brewers a Spring Training facility, pointing out that it was the chamber of commerce, not the town, that commissioned the second study.

To be clear, our last meeting with the Brewers development reps was on June 13. The math doesn't work for #GilbertAZ