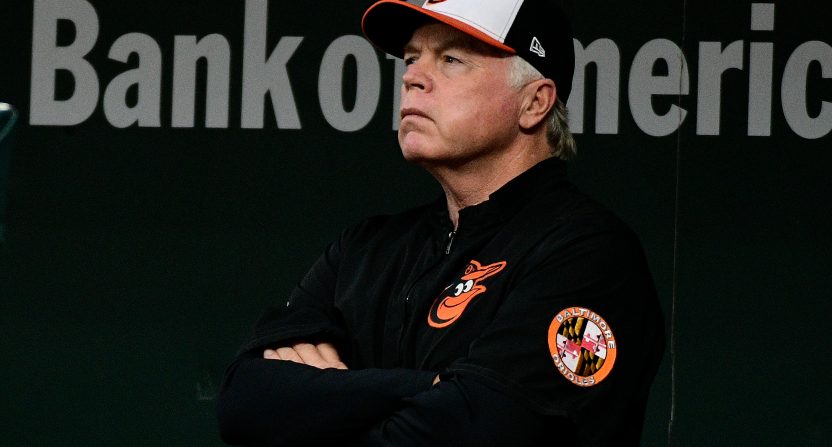 Tuesday looked like it could be a good one for the lowly Baltimore Orioles. Yes, they entered the day with an 8-26 record that was worst in the American League, but they were at home facing the similarly awful Kansas City Royals, and they had their ace, Dylan Bundy, heading to the hill. It seemed as strong a chance at a win as Buck Showalter’s team would find.

Except… things didn’t quite work out that way.

Dylan Bundy faced seven hitters. He allowed four homers, seven base runners, two walks and seven runs. He did not record an out. His Game Score was -19, which ranks tied for the 13th worst of all time and the second worst since after 1940.

But the damage, somehow, did not stop there. Showalter called on Mike Wright Jr., who promptly gave up four singles and a sacrifice fly before limping out of the inning. By the time Lucas Duda grounded out to end the frame, 14 batters had come to the plate, 11 had reached base and 10 had scored.

This would seem to be a nadir of sorts for the Orioles. The team will almost certainly fall to 8-27 on the season, at least 17 games out of first place in the AL East. Bundy, one of its lone bright(ish) spots this season saw his ERA tumble from 3.76 to 5.31 in a single outing. The staff’s ERA, 26th in baseball entering Tuesday, will fall even closer to the bottom of the league. And all that damage came at the hands of one of baseball’s worst lineups. (At least that pattern didn’t repeat every inning, though, and this didn’t wind up 90-0. It was instead a modest 13-1 deficit after five innings.)

The silver lining here is that disasters like the one the Orioles suffered Tuesday tend to produce drastic response, which is exactly what Baltimore needs. Clearly, it’s time to get as much as possible in return for impending free agent Manny Machado, and general manager Dan Duquette would be wise to shop Jonathan Schoop and Kevin Gausman as well. If Tuesday’s 10-run inning spurs the Orioles to action, maybe it will have been worth it. Then again, maybe it won’t have.