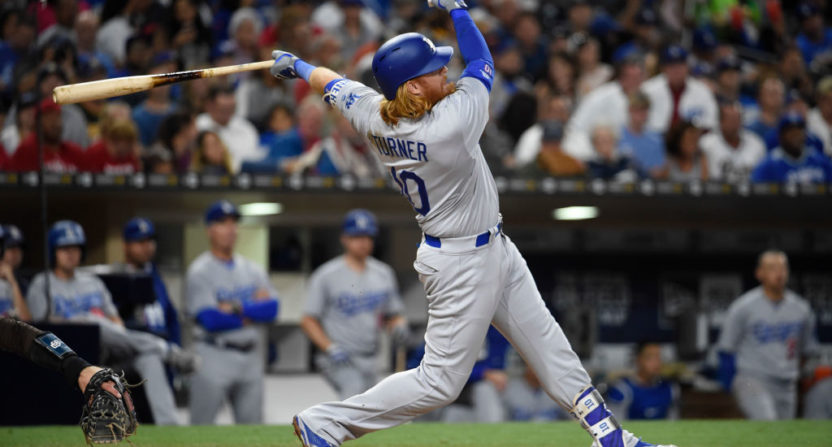 It’s okay to go back on Twitter now, as the Final Vote chaos has finally (and thankfully) ended.

The Los Angeles Dodgers’ Justin Turner has been selected by fans to be the final player on the National League roster, while the Kansas City Royals’ Mike Moustakas has been chosen as the American League representative for Tuesday’s All-Star Game in Miami.

Well, did fans make the right call on these selections?

Let’s first take a look at the National League Final Vote contenders, and where FanGraphs has the players statistically:

Turner’s 3.9 WAR (per FanGraphs; fWAR) leads all Final Vote contenders, and is actually second to only Paul Goldschmidt among all position players in the NL. That’s especially incredible when you consider that Turner’s only played 61 games due to injury. If Turner had enough plate appearances to qualify, he’d lead the NL in batting average, on-base percentage, wOBA, and wRC+. Basically, he’s been the best hitter in the league, while also playing very good defense at third base.

Rendon and Bryant have had great seasons of their own, but the data says that Turner has been even better. And significantly better, even, if you go by value on a per-game basis. You could argue that playing only 61 games — or 21 less games than Mark Reynolds — is a reason that Turner shouldn’t be the choice, but when his overall season value at the end of the day is higher than everyone else, does the fact he’s played in fewer games really matter?

Really, the bigger question should probably be about Turner not starting over Nolan Arenado (that choice is still fine, of course, and no one is more entertaining than Arenado; the All-Star Game is about entertainment above all else).

So, fans did a great job with the NL pick, but how about Moustakas in the AL?

Now, this choice certainly looks a bit questionable, with Moustakas being last among the AL Final Vote contenders in fWAR.

We all love dingers, and Moustakas’ 25 home runs are second in the majors to only Aaron Judge. But Logan Morrison has cranked 24 homers himself, while leading the Final Vote contenders in fWAR, and blowing them all away overall as a hitter with a .263/.370/.579 slash line and 147 wRC+. Of course, Morrison plays for the Tampa Bay Rays, and very few people care about the Rays. To win the Final Vote, Morrison’s numbers would probably have to look like Judge’s.

What about Bogaerts, Andrus, and Gregorius? They’re all shortstops, and their value is largely defensive-based. Andrus has the most homers of the trio with 11, and again, fans want to see dingers. Additionally, if you’re not a fan of the Red Sox, Rangers, or Yankees, it would be hard picking between these three players and their similar skillsets.

So, even if Morrison would be the more deserving choice, it’s easy to understand how Moustakas won, and you can’t really fault the fans’ AL pick. And the fans nailed the NL pick with Turner.

Overall, the fans did a nice job this year, especially when you factor in how well they did with the starting lineups.