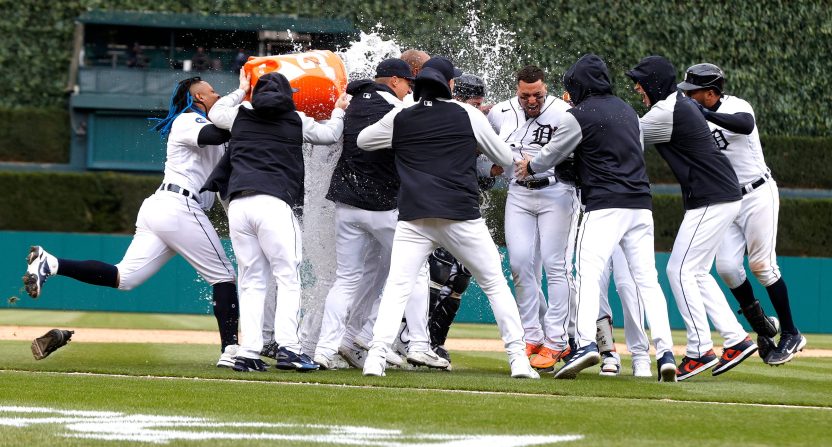 We don’t know how the 2022 season will play out for the Detroit Tigers but one thing’s for sure. They started the season in style.

Jack White got the home crowd in Detroit rocking to start the game with the national anthem. Making his debut with the Tigers, Javier Baez got the Motor City faithful rocking at the end of the game.

Detroit defeated the Chicago White Sox with a walk-off single from Baez that scored another player making his Tigers debut — Austin Meadows. Only, it was so much more than that. With two outs and Meadows on third, Baez sent a ball to deep right field. In his first game with the White Sox, right fielder A.J. Pollock appeared to catch the ball after bobbling it. Ordinarily, that would be an out.

You won't believe this walk-off! 🐅😱

After a two-out triple by Robbie Grossman, El Mago ✨🎩lines one that nearly gets out, AJ Pollock almost catches it on the bobble, but replay showed the ball went off the wall and the run scores!

Only, Baez and the Tigers’ suspicions were correct. The ball did hit the wall before Pollock caught it. Therefore, it was not a flyout to right field — but a game-winning single.

Couldn't have scripted it if we tried. pic.twitter.com/Qo2DoIQkyf

That play brought an end to a game that had already had a frenetic final two innings. Chicago carried a 3-1 lead into the bottom of the eighth. With two outs, Miguel Cabrera came to the plate and singled into center field, scoring Robbie Grossman and Meadows to tie the game.

White Sox designated hitter Andrew Vaughn was hardly phased. In the top of the ninth inning, he drilled a solo home run to give Chicago the lead.

Not to be outdone, Eric Haase came up in the bottom of the ninth and drilled a solo home run of his own to tie it.

Burning Down the Haase pic.twitter.com/LbB7opQgBz

After an out from Grossman, Meadows tripled to set up Baez’s literal wall-scraper. The frenetic finish had MLB fans buzzing on Twitter.

White Sox just lost to the Tigers by 6 inches.

LIGHTS OUT AT COMERICA! JAVIER BAEZ WALKS OFF THE WHITE SOX! TIGERS WIN! WELCOME TO 2022!

That’s a hell of a welcome to Detroit… Baez walkoff set up by a Meadows triple. This team will be fun to watch https://t.co/QjZnJtEK1C

I could watch this for hours. This city needed this. Go Tigers https://t.co/rYJf2rAUUj

I’m not lying when I say I’ll remember this moment forever. I know it’s the first game of the season, I know we could absolutely crumble and lose 100 games. But the final couple innings were DAMN GOOD baseball. This felt like a World Series game. ✨Pure magic. ✨ #DetroitRoots https://t.co/KWsRpXAN9d

Javier Baez walks it off for the Tigers.

Javy Báez walk off. It hit the wall. What a weird and wild game.

If the Tigers play 161 more games like that, we can only hope that their fans have strong hearts.