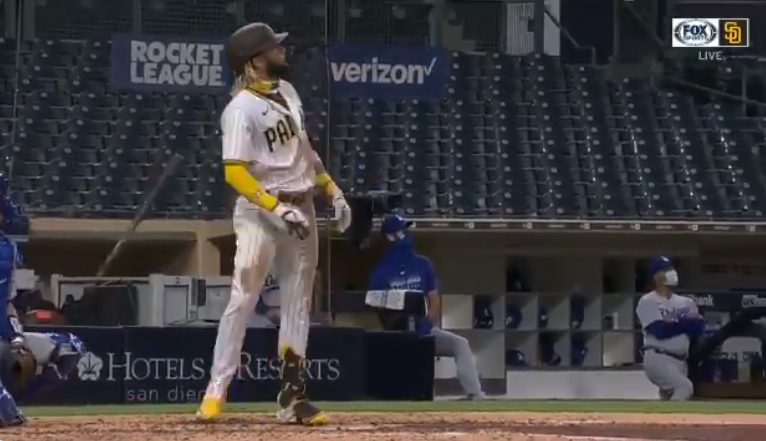 Fernando Tatis Jr. has quickly shown to be one of the best and most exciting players in baseball, and the San Diego Padres didn’t waste much time deciding that they want to make sure to keep him for the long haul. Tatis has agreed to a whopping 14-year, $340 million contract extension with the Padres, as confirmed by several reporters. Kevin Acee of the San Diego Union-Tribune was the first to report the news.

Fernando Tatis Jr. and the Padres have agreed on a 14-year contract.

Star shortstop Fernando Tatis Jr. and the San Diego Padres are in agreement on a 14-year, $340 million contract extension, a source familiar with the deal tells ESPN.

14 years and $340 million may seem crazy on the surface. Heck, it’s the third-highest dollar total for a contract in MLB history, trailing only Mike Trout and Mookie Betts.

Additionally, Tatis is only 22 years old and has just 143 major-league games under his belt. He hasn’t even reached arbitration and wasn’t set to be a free agent until after the 2024 season.

But that age is also the biggest reason the Padres are gladly willing to make this commitment.

Tatis has already made it very obvious that he’s legitimately great across the board. He does everything well on the baseball field: he hits for power (a .582 career SLG), he hits for average (.301 career AVG), he gets on base (.374 career OBP, and a 1), he’s a tremendous baserunner, and he plays solid — and improving — defense at a premium position in shortstop. He’s been worth 6.5 wins above replacement (WAR) over his 148 games according to FanGraphs, and 7.0 WAR according to Baseball Reference. He’s already an elite, MVP-level player, and there’s no reason to think he won’t improve in some areas. Even if he has to move off shortstop (way) down the road, he’ll be an excellent defensive third baseman with the bat to still be extremely valuable there.

And it’s not just about the on-field performance when talking about Tatis’ value to the Padres. Thanks to how good and entertaining he is, he’s going to put a lot of butts in the seats at Petco Park. His presence increases ticket sales, sells a lot of jerseys and shirseys in the team store, gets more people to tune into Padres games on television, and adds a very meaningful boost to the general fan interest and buzz about the Padres. It’s hard to quantify this kind of stuff, but it definitely matters and adds *a lot* of dollars to the franchise. There’s a reason Tatis is already on the cover of MLB The Show despite not even playing a full MLB season’s worth of games yet.

Fernando Tatis Jr. has been announced as the cover athlete for MLB The Show 21.

At 22 years old, he is the youngest player ever chosen for the cover. pic.twitter.com/SNezxCWNb7

But there’s a very good chance his on-field performance proves to be very worth this contract alone. As long as Tatis remains anywhere close to the player he currently is into his late 20s, that alone is worth hundreds of millions of dollars- and it’s very possible he gets even better. It cannot be said enough that he *just turned 22 years old this year*. He’s already in the conversation for baseball’s best player that isn’t Mike Trout (and Trout turns 30 in August).

This is yet another massive statement made by general manager A.J. Preller and the Padres this offseason, after already trading for star pitchers Yu Darvish and Blake Snell (and another solid arm in Joe Musgrove). They’re already a title contender and ready to challenge the juggernaut Los Angeles Dodgers in the NL West. But this Tatis move shows that it’s not just about 2021, 2022, or even 2023 for San Diego. The Padres are looking to keep the success going long-term, and having Tatis around will certainly help their chances to do that.