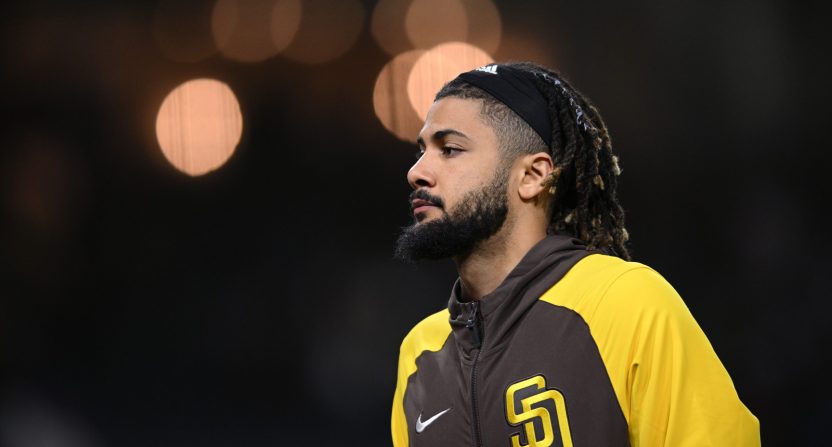 Fernando Tatis Jr. has missed the entire season recovering from an offseason wrist injury. He had recently started a rehab assignment and his return to the San Diego Padres appeared imminent. But that return will not happen in 2022, though it’s for an entirely different reason.

Jeff Passan of ESPN reported that Tatis will be suspended for 80 games for violating MLB’s performance-enhancing drug policy. The suspension will cover the rest of the season. As is the case with all PED tests, Tatis will also be ineligible for the postseason.

Fernando Tatis Jr. will be suspended for 80 games, MLB announced. The suspension will cover the remainder of this season and will render him ineligible for the postseason. It will continue into the beginning of next year. On the verge of returning, he's done for the year.

Including Friday, the Padres have 48 games remaining in 2022. So, he’ll miss roughly the first month of the 2023 season before being eligible to return.

The news is a punch in the gut to all baseball fans. Tatis is 23 and throughout his short career had shown himself to be one of baseball’s best, most exciting players.

Fernando Tatis Jr. is one of six players in MLB history to finish top 5 in MVP voting multiple times before turning 23 years old.

Padres teammate Juan Soto is also on that list. https://t.co/Ml6vcvfVnl

The Padres released a statement that said in part that they “were surprised and extremely disappointed to learn today that Fernando Tatis Jr. tested positive for a performance-enhancing substance in violation of Major League Baseball’s Joint Prevention and Treatment Program.”

San Diego was not alone with that sentiment.

The baseball world was collectively stunned and saddened by the report.

Excuse me while I pick my jaw up off the floor. https://t.co/OO6q4Z9Xft

The Padres pushed all their chips in for 2022, and get bit in the foot by a rattlesnake yet again. https://t.co/SPfS3gMJhB

I feel like I need to let this one marinate before I say something I’ll regret. https://t.co/Qmd4VZzBPz

Say it ain’t so Fernando… not the news I was hoping for attached to this name! https://t.co/Lr7NANLtdB

As far as positive PED tests go in the post-steroid era, this is one of the biggest. The Padres traded for superstar Juan Soto at the trade deadline and with the pending return of Tatis, seemed to have one of the most feared lineups in baseball history.

San Diego still has a lot of talent left. So, it’s not impossible that the Padres can rally and win it all, like the San Francisco Giants did in 2012 when MVP candidate Melky Cabrera was suspended. But this will definitely make things harder on the Padres and will be a cloud that will follow Tatis for the rest of his career.