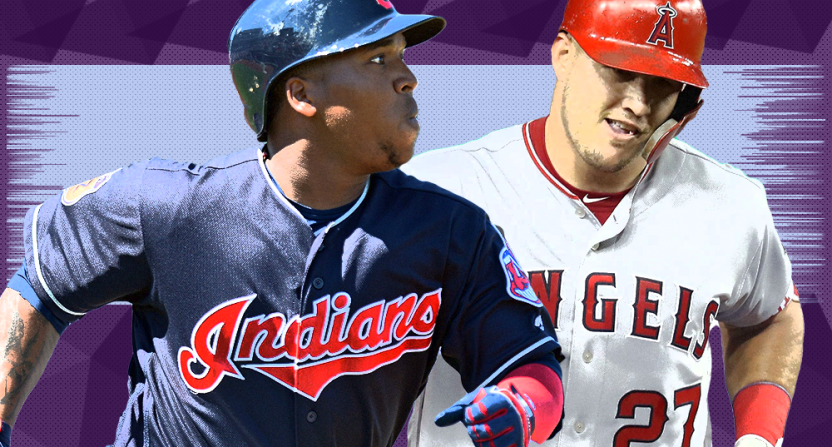 We’re just a few weeks away from the beginning of the 2019 MLB season, and sportsbooks have released opening odds for the Most Valuable Player in each league.

Here’s how the Westgate Las Vegas Superbook has the opening AL MVP odds (click to enlarge): 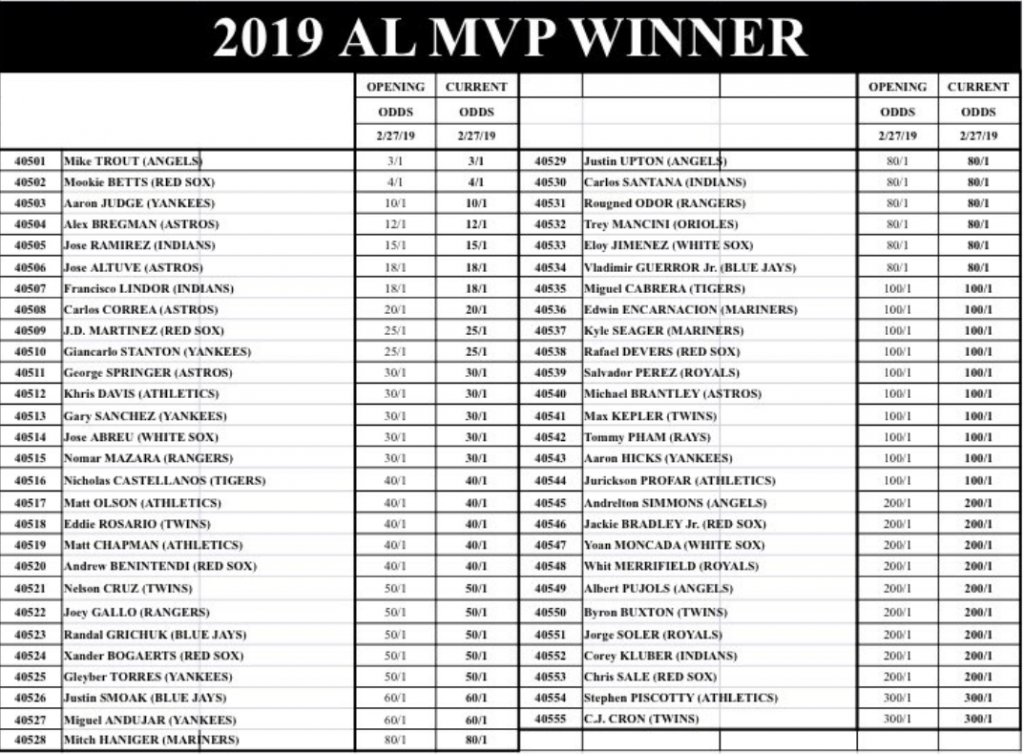 You’ll find slightly varying odds by sportsbook, and there will surely be some movement in these odds before Opening Day. But using the Westgate opening AL MVP odds, let’s take a look at some players that stand out as values (you can see the NL MVP odds best values here).

It seems crazy to suggest a player being a good value at 3/1 to win MVP before the season even starts, but that’s really the case when we’re talking Mike Trout.

He was worth a nice 6.9 wins above replacement according to FanGraphs (fWAR) in 2017, a season he only played 117 games due to injury (and that’s the only time over the last six years that he hasn’t played at least 140 games). That WAR was still fourth in all of baseball.

In 2018, Trout and his 10-WAR didn’t win MVP, only because Mookie Betts was somehow better.

Trout is annually absurd, and maybe Betts will prove to be as well, but we have consistency and certainty in Trout. It’s why the FanGraphs Depth Charts projections (combining ZiPS and Steamer) have Trout at 9.2 WAR for 2019, while Betts is second at 7.3.

The 26-year-old does everything well on the baseball field and keeps getting better.

If we include Jose Ramirez, we should include the guy that plays next to him in the Cleveland Indians’ infield.

Lindor complements his offensive game with very good defense at shortstop, and if you can put up big offensive numbers with good defense at a premium position, you’ll be quite valuable. And it’s very possible that Lindor could end up using his all-around skillset to be the AL’s most valuable player in 2019.

Correa is just 24 years old, and it’s not like he just forgot how to be an awesome baseball player. He wasn’t healthy for much of 2018, but claims to be very healthy now, and the results so far in spring are backing that up.

Story and video: Carlos Correa hit a ball with an exit velo of 113-mph a couple of days ago. His tops last year while dealing with a sore back was 105. More:https://t.co/LIcBAYbDLT

Xander Bogaerts took the next step offensively in 2018 with a big-time improvement in the power department, and a career-best walk rate (9.5%). Bogaerts saw his slugging percentage jump 119 points to .522 in 2018, and put together an .883 OPS (his previous career-best was .802).

Contract year Xander Bogaerts might be a MONSTER. That ball hit a space satellite 🛰 #RedSox pic.twitter.com/zYQUVyXud8

At 26 years old, Bogaerts may continue to see his offensive numbers rise, and he brings good value defensively at shortstop (as Lindor and Correa do too). It’s also his free-agent year and he has the opportunity to really boost his value heading into next offseason, so you can be sure he’ll be motivated. There’s a path here to Bogaerts jumping into the elite tier of AL position players in 2019.