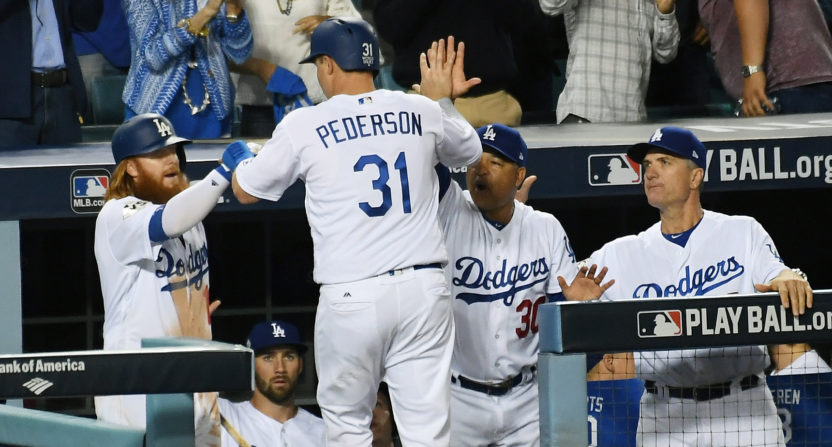 The 2017 Major League Baseball season brought us remarkable individual achievements from Aaron Judge and Giancarlo Stanton; incredible team accomplishments from the Dodgers, Indians and Astros; surprising transactions that sent Stanton, Justin Verlander and other stars to new teams; and thrilling postseason games, most notably from Houston and L.A. in the World Series.

We asked our staff for bold predictions for baseball’s 2018. Here’s what they came up with:

Are all these players really going to sign in the next five weeks or so? That seems unlikely, especially with so many teams wanting to stay under the luxury tax, and not wanting to give up draft picks to sign players.

Next offseason’s once-in-a-decade class is surely part of the issue. Teams like the Dodgers, Yankees, and Cubs are trying to stay under the luxury tax now so that next offseason they can make a run at players like Bryce Harper, Manny Machado, Josh Donaldson, Clayton Kershaw (if he opts out), Charlie Blackmon, Dallas Keuchel, and Craig Kimbrel. There are increasing penalties with each consecutive year a team is over the luxury tax, so organizations are trying to pick and choose when they threaten going over it. And, while there are many impact players available this offseason, there are franchise-changing talents available with next year’s class.

All it can take is a big signing (like Darvish or Arrieta) to get the ball rolling here, but we’re already approaching the new year and things are awfully quiet on the free agent front.

Andrew Bucholtz: I think the Giants are going to at least partly recover from their disastrous 64-98 mark in 2017, and I think they’ll be in playoff contention at the All-Star break. Trading for Evan Longoria was a nice move and a huge upgrade at a position of need, and they didn’t have to give up as much as you might expect thanks to their decision to take on salary. Many wondered about that trade given how bad the team was last year and the other options that were available in free agency, but I can see it working out in at least the short term.

The Giants do have some legitimate issues, and adding Longoria won’t fix everything, but if Madison Bumgarner can stay healthy and others can return to more typical form than what we saw last year, they could surprise some people.

They also don’t appear to be done making moves. Though they missed out on Giancarlo Stanton and Shohei Ohtani, they’re still approaching this offseason aggressively, and have been linked to other players like Billy Hamilton. I think GM Brian Sabean is eager to get this team back in contention quickly rather than setting up a long rebuild, and I think he has a chance to do it.

The Giants are still in a division with the Dodgers, so a playoff berth is a tough challenge, but they might get there. A more reasonable prediction at this point is that they’ll be in contention at the all-star break, though, and that would be quite a jump up from where they were in 2017.

Alex Putterman: Months before the season arrives, the baseball world has already anointed a “Super Seven” of MLB teams: the Astros, Dodgers, Indians, Cubs, Nationals, Yankees and Red Sox. My bold prediction is that two of those teams will miss the playoffs.

Last year’s baseball season was about as predictable as they come. Each of the game’s six divisions entered the season with a clear favorite, and each of those favorites wound up winning those divisions. Yes, the wild card slots provided some surprise, but for the most part the 2017 campaign went as projected. It’s tempting to expect more of the same in 2018, but recent baseball history suggests we’re in for a less chalky year to come. In fact, almost every season features a team falling short of big expectations. The 2016 Mets, the 2015 Nationals, the 2014 Red Sox, the 2013 Giants, the 2012 Phillies. And on and on. Odds are that the coming season will follow that pattern, making 2017 an aberration.

Maybe it’s a cop-out to predict two disappointments without specifying who they will be, but that’s as bold as I’ll give you right now. If 2017 was the year of the expected, 2018 owes us some surprises.

Joe Lucia:  The Miami Marlins have been in the news for all of the wrong reasons this offseason, and I think that continues into 2018. I believe the Marlins will end up trading Christian Yelich (but not JT Realmuto) this offseason and their average attendance will hit an all-time low at Marlins Park during the 2018 season.

Ian Casselberry:  Mike Scioscia will be the first manager fired. Yes, he’s been an institution in Anaheim, going into his 18th season in the Angels’ dugout. Only San Antonio Spurs coach Gregg Popovich has held his job longer among head coaches and managers in American professional sports.

But Scioscia is also in the final year of his contract, making him the proverbial lame duck. If the Angels and general manager Billy Eppler haven’t made a commitment to him beyond the 2018 season, how much of an obligation will he feel to let him finish the season if the team doesn’t meet expectations after signing Shohei Ohtani and Zack Cosart, re-signing Justin Upton and trading for Ian Kinsler?

Sure, owner Arte Moreno might keep Scioscia from being fired if the Angels are disappointing. But after 15 years, he might be ready to make a change. And he already sided with Scioscia in one power struggle with a general manager. Jerry Dipoto lost his battle, but Eppler won’t. He’s likely eager to hire his own choice for manager, and his guy may already be in the dugout with newly hired bench coach Josh Paul, with whom Eppler is familiar from when both were in the Yankees organization. (Another option could be former Tigers skipper Brad Ausmus, who’s now Eppler’s special assistant.)

Replacing Scioscia with Paul, who has only minor-league managing experience on his resume, might raise some eyebrows. But he was in contention for the Yankees’ managerial opening, and if Brian Cashman thought Paul could be a manager who could be an extension of the front office, Eppler surely views him the same way and sees an opportunity to further shape the Angels to his liking.