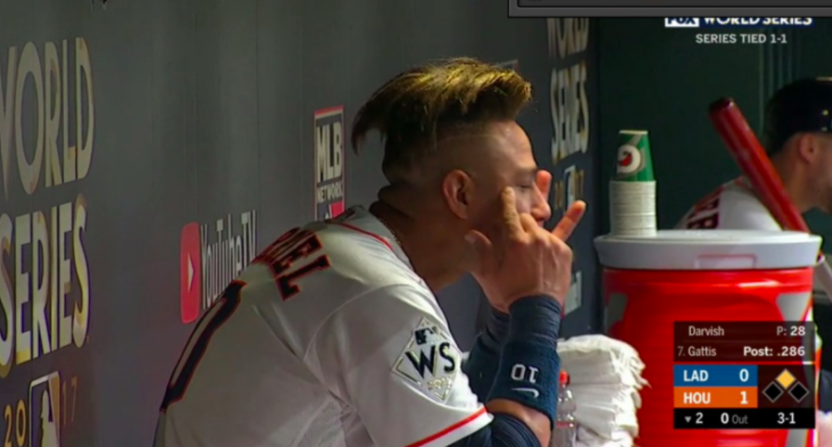 The World Series saw an ugly controversy Friday night, with Houston Astros’ first baseman Yuli Gurriel hitting a home run off Los Angeles Dodgers’ pitcher Yu Darvish (part of Darvish’s overall struggles in a 5-3 loss) and then making a slant-eye gesture in the dugout. As per Yahoo’s Mike Oz, Gurriel caused controversy with his comments too:

The moment in question was caught by the Fox cameras and was quickly shared around the Internet. Gurriel also appeared to say the word “chinito,” amateur lip-readers surmised. Chinito would translate to “little Chinese boy.” When added to the gesture, Gurriel’s action could be interpreted as a racial slur against Asian people.

Dodgers Digest’s Chad Moriyama has more on that part:

As for his use of the word “chinito,” Gurriel explained, “It’s because in Cuba and in various places, you don’t say Japanese, you call all Asians ‘chinitos.’” He apologized for that too. “I was in Japan and I know they are offended by that,” he said.

After the game, Darvish called the gesture “disrespectful,” and MLB said they would interview Gurriel and determine discipline from there. On Saturday, MLB commissioner Rob Manfred announced that discipline, which turned out to be a five-game suspension but one that didn’t start until the 2018 regular season. Here’s Manfred’s full statement on the decision:

This is Rob Manfred's complete statement on Yuli Gurriel's racist gesture and five-game suspension to be served next season. pic.twitter.com/9q7NH7qFjg

Deciding not to punish Gurriel until next season didn’t sit well with many, though. Some argued that Gurriel should be suspended for the rest of the World Series even before any official decision was made:

As someone who hopes the Astros win the World Series: Yuli Gurriel should be suspended for the remainder of the series.

If Yuli Gurriel is not suspended, MLB is sending the message that you can be racist and offensive as long as the game is important.

Everyone errs, but it was a big mistake, and he has to be punished for it with a one-game ban, at the least, in this World Series. It is said that Gurriel will meet Saturday with baseball’s powers that be, and let’s hope that MLB does the right thing here.

MLB people take inclusion and diversity very seriously. And while the gesture was very brief, and one in the heat of the moment — he noted that he had never homered off a Japanese pitcher before — it can’t go with a wrist slap or less.

MLB has taken the workplace very seriously. And they need to show that that is indeed the case, making a strong statement, and sitting Gurriel for Game 4.

Darvish himself tweeted that he wants to “stay positive and move on”:

However, in comments after the game, Darvish indicated he did want to see some action taken by MLB:

“Houston has Asian fans and Japanese fans, and there are Asians all over the place,” Darvish said. “Acting like that is disrespectful to people all over the world. To the Houston organization, it’s just not a nice thing.”

Darvish later added that he is trying to ignore it and move on, but that he respects Gurriel for the time he played in Japan.

“Nobody’s perfect, and everybody’s different,” Darvish said. “We all make mistakes. We’re all human beings. That’s what I’m saying. We’ve just got to learn from it and we’ve got to go forward.”

Darvish later told Japanese reporters that Gurriel should be punished.

The criticism grew stronger after MLB’s decision to let Gurriel play the rest of the World Series was announced:

@mlb @mlb_pr @robmanfred as both a fan of baseball and an Asian American, I’m appalled by lack of immediate discipline of #yuligurriel

Chase Utley got suspended two games during the 2015 NLDS for a slide, but Yuli Gurriel gets a meaningless "5 games of 2018" for vile racism? pic.twitter.com/NMMgAbAK23

complete joke of a suspension for Yuli Gurriel. Punishments are not supposed to be convenient. #DodgersVsAstros

Yuli Gurriel suspended the first five games next season means NOTHING. It should be immediate. Racist actions (should) have consequences.

It’s perhaps notable that even Gurriel’s apology didn’t go over well, with him arguing only that he didn’t mean to offend anyone:

Gurriel apologized for the incident, telling reporters that he believed it wouldn’t be viewed as racist.

“I didn’t try to offend anybody,” the native of Cuba said through an interpreter. “I was commenting to my family that I hadn’t had any good luck against Japanese pitchers here in the United States.

“I didn’t think anybody would think about what I meant with all those kinds of things like that. I offer my apologies to baseball and anyone offended.”

Moriyama pointed out that this wasn’t an effective apology at all:

After the game, Gurriel was asked about it by the media, and he offered an “apology”. In reality, though, it was just a bunch of excuses.

…“I’m sorry that I got caught and that you were mad.”

Basically he’s claiming he didn’t mean to be racist while making slanty eyes and using a slur. K.

“I didn’t mean to do anything offensive." –#Gurriel. Yes, because we all know that doing this to an Asian is a universal sign of respect. pic.twitter.com/tfFO9ebyQU

When asked for further comment by Los Angeles Times reporter Amina Khan, Kim noted that this is a wider problem in MLB:

Not much more 2say really, except that clearly this is not an isolated incident in the @MLB. Maybe #Gurriel will change that. #WorldSeries pic.twitter.com/x5Tetrj3ET

Los Angeles-based rapper Jason Chu also had an interesting response, as illustrated in this Times story from Khan and Hailey Branson-Potts.

“It just felt like, ‘Man, again?’ Like, we’re so used to this,” said Chu. “People don’t even pause. They think that this is acceptable, socially, to target Asian Americans in this way, or Asians in general.”

As a rapper and hip-hop artist, Chu said he understood that trading insults was often part of that world.

“But at least do it creatively,” he said. “This just felt like a ‘lowest common denominator’ type of situation where he didn’t have anything else he could do, so we just went to this very basic kind of response.”

Gurriel’s actions have certainly taken plenty of criticism, and they have led to some punishment for him. A five-game suspension isn’t nothing, and it’s longer than some previous suspensions handed out for racist gestures or offensive comments. But many are wondering if the decision to let him continue to play through the postseason and only face discipline during the 2018 regular season is a strong enough message. And they have a good case.